In 2020, what are the most common approaches to power-line-communications for hobbyists? (updated)

I'm looking for modern control protocols, designs and/or components to simplify controlling (and running) a very low power system on a chip safely from mains power. I'm in the USA, and on a hobby budget. Consumer trends here are of interest, but so is the National Electric Code. Surely the world has come a long way since X10.

Has Bluetooth LE (BLE) made the older power-line communications standards old-hat? Are there ways of coupling BLE into the power-line that are considered good practices?

I found the datasheet on the Cypress Semiconductor CY8CPLC10 I was referring to earlier (below). Cypress labels it a Integrated Power-line Modem PHY using 2400 bps FSK. That part number suggests its based on the PSOC-1 (8-bit) 5 generations behind their current 32-bit models. I don't think I care about the 8-bit part if I can treat it as a re-programmed modem.

However, the Digikey listing however has some sort of end-of-life notice link, dated July 2019. But that EOL notice seems to be for a CCS7331P-CAZR from Cirrus Logic. Seems like a different device, can anyone clarify what that means?

A web power-supply-only web search like AC DC Isolated Power 3.3V uA turns up the sort of component I might use for PS alone. Some quite quite inexpensive while still claiming up to 3kV isolation. It even seems like there are some defacto standard pin-outs for these board mounted power supplies. E.g. ebay "1PC NEW AC DC Isolated Power Board Precision 12V300mA 3W 3.5W" at $1.99 quantity one.

But if I add the PLC part AC DC Isolated Power 3.3V uA with power line communications, the results disappoint me. 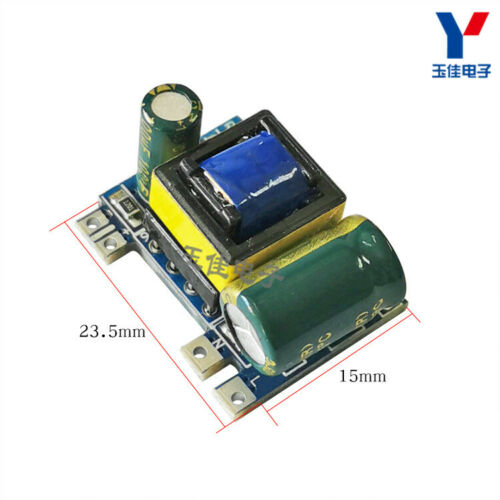 The Cypress Semiconductor PSOC 5LP illustrates the class of SOC i'm looking to use as a building block. Its got a pretty wide DC input range, so I'm not even sure if I need a regulated supply.

I'm not tied the PSOC family, but I've found it to be very low-cost prototyping friendly. This sort of device has some impressive programmable analog and digital blocks that might make sense to leverage to keep chip count to a minimum. As I remember, Cypress had a PLC product line some years back, but it seems they are out-of-the-game. None of Cypress's current applications notes seem to make recommendations.

Either you have very low power consumption requirements, or you have access to mains power.

I think you're overestimating what a microcontroller needs in power. Modulating information onto a powerline needs way much more power than your microcontroller would need for generation of that data!

system on a chip safely from mains power.

Can't exist: Mains power means you need galvanical isolation from anything you might ever touch, and transient protection and the fact that you really need your digital system to have a somewhat stable notion of ground means, this can't be done without a transformer, really. No single system on chip can be a complete powerline modem!

Are there ways of coupling BLE into the power-line that are considered good practices?

Neither. BLE is a 2.4 GHz ISM-band standard, and uses a bandwidth that would be considered very wide in powerline terms, so that you need a very complex equalizing system to work with the powerline channel, even if you could mix things down from 2.4 GHz to 0-1 MHz. The point is that the BLE signal is designed so that it's easy to transmit over the air at 2.4 GHz. That's something very different from being easy to transmit over a powerline channel!

Again, the problems over the air and on the power line are completely different, and that leads to different solution being "easy" or "sensible".

Surely the world has come a long way since X10.

The Cypress Semiconductor PSOC 5LP illustrates the class of SOC i'm looking to use as a building block.

You're solving the easy problem, which is getting analog signal in and out of a microprocessor core.

The hard problem with powerline is the fact that, unlike an antenna, the impedance of a power line is low (obviously, otherwise power wouldn't reach you), and varies with time, and the channel is terrible.

So, really, at your point, you need a ready-made modem, including a safe coupler frontend – after all, we're talking lethal voltages here, and you can easily burn down your house with badly constructed thing that you plug directly into your power outlet.

One of the most interesting looking modern technology for the PLC space is one called PRIME (PLC). Primary use for PRIME seems to be in Advanced Metering Infrastructure (AMI), but the snippets I've found make it seem potentially useful in other applications.

This is a complete specification for a new OFDM-based power line communication system for the provision of all kinds of Smart Grid services over electricity distribution networks. Both PHY and MAC layers according to IEEE conventions, plus a Convergence layer, are described in the Specification.

There seem to be multiple silicon vendors in the space, including Microchip and ST. Recent silicon products supporting this seem also to be able implement other sub-500 kHz power-line communications.

Not the answer you're looking for? Browse other questions tagged safety isolation power-line-communication or ask your own question.