Arduino as modbus master with MAX485 doesn't get any response

I'm having some troubles trying to query a modbus slave with an Arduino through RS485.

I've already succeeded in querying a software modbus slave running on my PC through the USB/COM port using the ModbusMaster libray, hence it shouldn't be a software issue.

I read about TTL and level conversions and I put on a circuit like this on a breadboard: 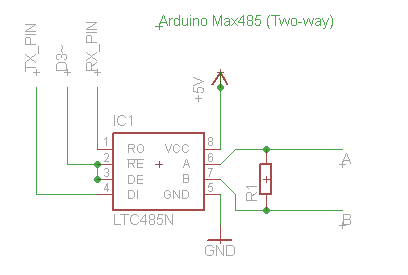 Using the same firmware/sketch that worked for the software slave, I connected the arduino pin TX and RX to the max485 and A and B to the modbus slave and I issued several requests.

I can see the signals converted by the MAX485 (CPA1114) though the oscilloscope and it seems to be right. The led on the modbus slave lights on as it sees a modbus transaction. Still, what I read as result of the request is always 0xE0 (invalid slave id) or 0xE2 (timeout).

I queried the slave with the same equal request using another tool (a RS485/USB converter and CAS Modbus Scanner), and it gives the expected results, that is data 0x01.

This is the code I'm running on an Arduino Ethernet (with a display for debug purpose):

These are the request signals emitted by the Arduino, that always fail to get a data response, and the other tool, that always succeed: 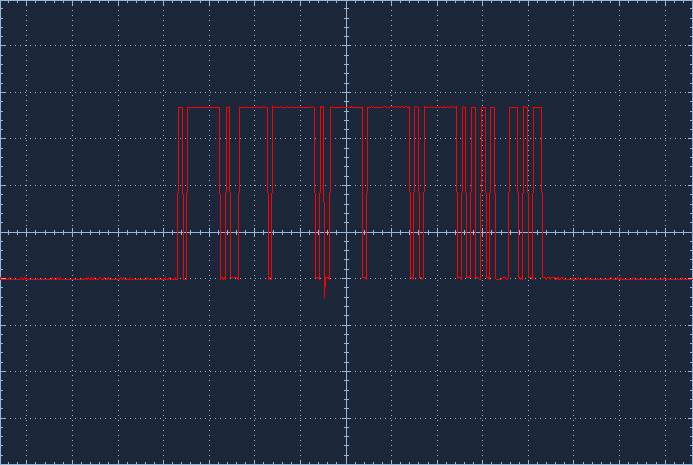 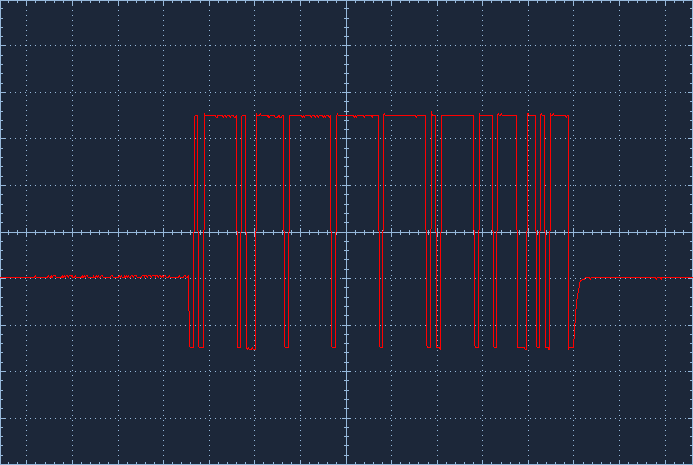 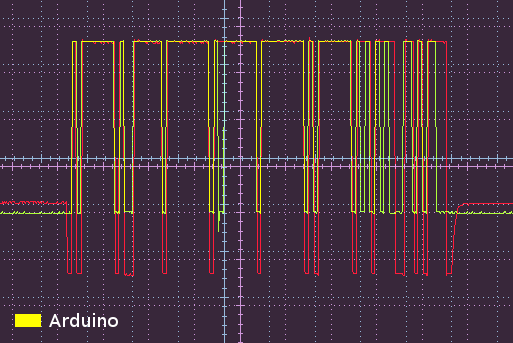 Overlap of the two signals

Is there something wrong with the request signal? Am I making any mistakes in the circuit or the code?

Any pointers would be greatly appreciated.

As suggested by Kvegaoro, I got it working by editing the ModbusMaster library in order to switch the D3 pin to the right status at the right moment. For doing so I used some code I found on this post (italian) in the Arduino forum.

Note that the D3 pin is then hard-coded in the library so this is not a good design, if someone is going to need this would adjust it better. It works though!

I think you have an issue with you line driving RE and DE because you set the D3 line high to transmit, then you issue a modbus function 3 (read holding registers). After this you check if the request was a success and after this you set the D3 line low and you read the response from the library buffer from the node. The issues stands that a modbus transaction includes the master querying the slave and the slave responding which seems to be taken care of by the node.readHoldingRegisters() fucntion therefore the master releasing the RS485 bus should happen within this fucntion not after it.
What I guess its the problem, its that the modbus library you used is intended for RS232 as the physical layer therefore you might have to modify the library so the RS485 bus is released as soon as the master completely finishes sending the query Hope this helps

Thank you very much! You should change in the ModbusMaster.ccp as below:

It exist a short interval, when the slave is in a response_waiting state and the master is not yet sending, so the line is in undefined state because nobody drives it.This may produce spurious unwanted signals. You must tie the A and B lines to Vcc and Gnd with some 1k resistors.This will force a defined state, even if all nodes are idle(HiZ).

Not the answer you're looking for? Browse other questions tagged arduino rs485 ttl modbus or ask your own question.

1
Struggling with serial communication over RS 485 using modbus protocol
0
Modbus communication between Arduino and Unitronics Jazz2 PLC
1
Mega2560 master on RS485 bus stops communicating with VFD when I add another RS485 module
0
Why lines A and B are HIGH when idle (rs485)
0
How to increase data through put of RS485 RTU?
0
Connecting 50 Arduino slave devices to a single master Raspberry PI
0
Reverse Engineering RS-485 Signals - Floating Issue
1
Modbus over RS485 - no response from device