Are the LED's in this diagram Backwards

It has this diagram: 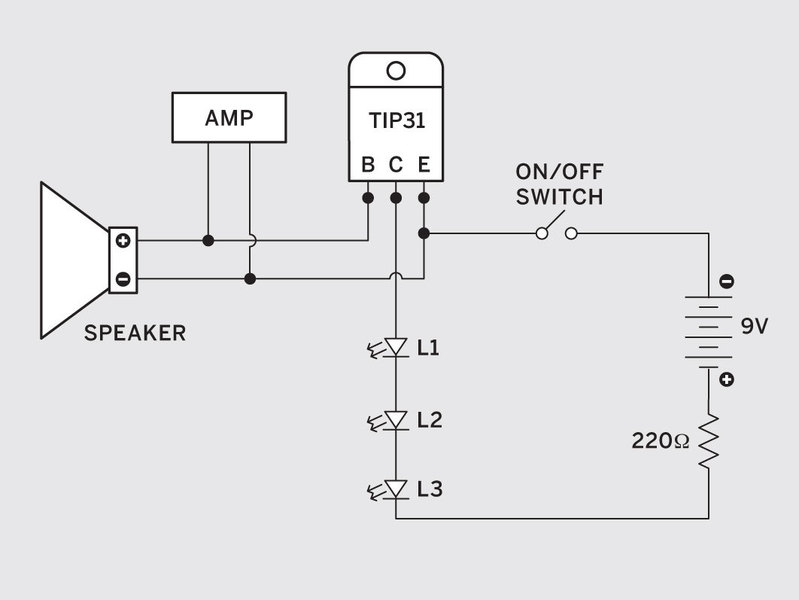 The LED's are backwards in this diagram, right? The "arrow" (anode) part of the LED should be hooked up to the positive (+) voltage of the battery?

Solder the battery snap’s red wire (+) to the LED chain’s anode, and the snap’s black wire (–) to the TIP31 transistor’s emitter, the right leg as you face the front side with the legs pointing down. Then connect the LED cathode to the transistor’s collector, in the center.

So it looks like the battery and LED schematics are each upside down, but the + and - in black circles are correct?

The schematic is wrong. The LEDs should be the other way around. The TIP31 is a NPN transistor, so current flows into the collector and out the emitter. As Anindo pointed out, the battery is also drawn backwards. However, it is labeled as it should be installed.

This is a really crappy circuit. I would delete and forget about it as quickly as possible. Note that there is no current limiting into the base. The B-E junction will therefore clip the speaker signal to one diode drop in the positive direction. When the signal is loud enough to turn on the transistor, it will sound horrible.

There seems to be a lot of confusion about this circuit. This is certainly not helped by the "diagram" the OP provided instead of a well drawn schematic that makes the circuit immediately clear. Here is a properly drawn schematic of the original circuit:

From this it should be immediately obvious that the LEDs are backwards. The apparent intent is for the LEDs to light when the speaker is driven by some minimum sound level. Once the tops of the sound waveform exceed the B-E drop of the transistor, the transistor is turned on and presumably the LEDs are supposed to light. However, not in this circuit since the LEDs are oriented so as to block the current that would light them.

Here is a circuit that uses the same basic principle, but with the major flaws fixed:

The LEDs are now oriented the right way so that they will light when the transistor turns on.

R2 keeps the signal from being clipped to about 700 mV by the B-E junction of the transistor, or alternatively, keeps the transistor from getting blown out a large and powerful enough audio signal that refuses to get clipped. The 1 kΩ resistance of R2 is so much higher than the 8 Ω impedance of the speaker and probably even lower impedance of the audio source that it will not effect the signal. But, it is still low enough to allow enough base current to flow to allow the LEDs to light without requiring much more than the B-E drop level from the audio signal.

D4 clips the signal at the base of Q1 to a safe level during the negative part of the waveform. Q1 will be off anyway then, but the maximum reverse voltage level of the B-E junction of a transistor is usually not that high. With a sufficiently loud audio source, this could be exceeded, which would damage the transistor. D4 clips the negative peaks on the base of Q1 to one diode drop below ground, which is well within the reverse voltage capability of the B-E junction.

avoid this design. Poorly done also. It will easily blow the transistor with low audio power.

A better design will; no load the audio, rectify both peaks of Audio, protect the transistor from failure at -5V audio signal.

One can make LED's very dim and ready to boost.

Look at this simulation Or invert with NPN. either way.Adjust emitter R to control current. 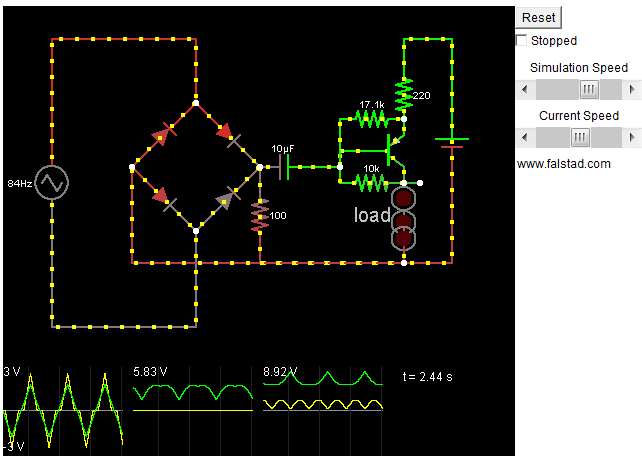 Of course there are many different solutions. Since the LEDs that consume 20mA with current limiting resistors can be easily driven by an audio amplifier. The challenge is to balance the bridge so that two legs add up to the about 1 or 2V less than the battery for efficiency yet tolerate voltage variation from 8.5 to 9.5V and choose both R values the same and the sum times the desired average current gives that drop of 1 to 2V.

It helps to know the voltage drop at the desired current and yellow Red are low V and Blue White green are about double that of std hi efficiency Yellow Red. One can be more precise with desired parts.

This design eliminates the transistor with a simliar effect except I added a large cap to stretch out the flashes.

It's amazing what one can do in 15 minutes on a simulator. It shows the polairty with a mouse over. 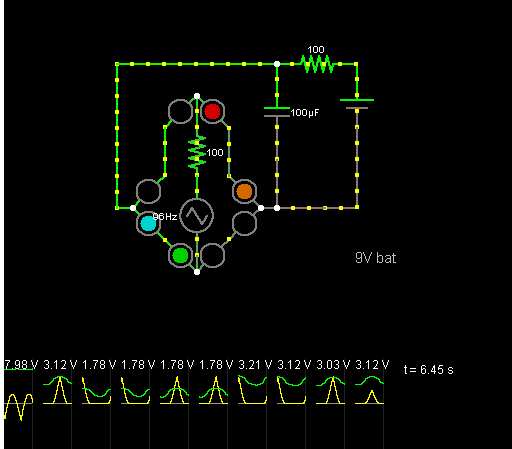 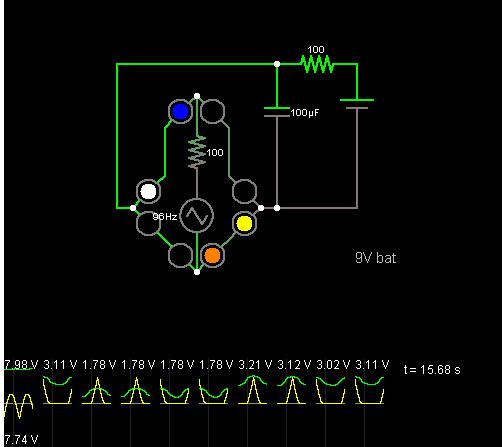 The signal generator would be a typical 10W speaker driver with 1 to 5Vpk output in this example. I deliberately chose different LEDs with different voltages and colors to show what is possible and put a scope probe over each LED in a circle starting at 11 o'clock.

Not the answer you're looking for? Browse other questions tagged led voltage schematics wiring or ask your own question.

3
Common cathode RGB LED Cube: Can/should it be done?
2
Could use some help on what should be a simple LED wiring scenario
1
How to deal with grounding and the capacitors in this opamp schematic?
0
Mixing 2v and 3V LED's and calculating resistors
4
Understanding current, voltage and resistance
0
Easiest project ever, but I still need straight answers. AA 1.5v x2 to RGB LED (trying to make white)
1
My first PCB - How do I run signals off of the board?
3
Powering two 3-LED lamps with battery/Battery pack - Multiple questions
1
Need help understanding PNP Base into NPN Collecter circuit for LED Array
2
Practical issue aiming non-visible infrared light at a reflector