Driving a small water pump with a microcontroller and a transistor

I have bought some water pumps for a project I am currently working on, the thing is that I have never used water pumps before, I am sure that pumps are inductive loads, but I am unable to know the Inductance of the coil inside the motors.

The pumps come with some information written on it.

I would like to drive these pumps without any relay, if it is possible with some To-92 BJT. I know that as the pump is an inductive load a proper flyback diode should be added.

How can I model the pump's coil with the data provided?, also what kind of BJT can I use, one that at least can take 300 mA?, wouldn't current spikes burn the BJT?

This the schematic I have in mind: 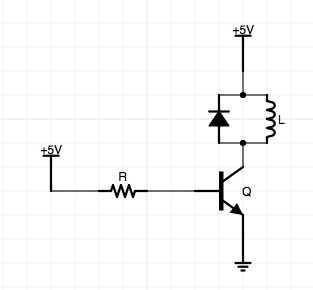 At this power level, there's no need to model the coil's inductance, it's cheap enough to get overkill on the component sizes just by designing for the current. Assume the stall or starting current will be 5 to 10 times the maximum running current, or measure the start current for better accuracy.

Your transistor has to have a continuous Ic of at least 220mA, and a peak capable of handling the starting current. Ideally its gain will hold up at the start current level, most transistors lose beta at the top end of their specified current range. The catch diode will only be called upon to handle the 220 mA.

I'd use a 1N400x diode. They're cheap, tough as old boots, and total overkill for the job, 1 A continuous, 30 A surge. However, according to the paper specifications, even a 1N4148 would do.

You have a plethora of transistors to choose from. The trick will be getting a BJT that can handle 1 A collector current while keeping a guaranteed gain high enough to be driven from your MCU output pin.

Given the range of voltages permissible for your motor, I might be inclined to use a darlington, such as a TIP112. While their VCE drop is higher than a straight BJT, the gain is >1000, easing the choice of R. A ULN2803 would also be a good choice here, it's an octal darlington driver, for direct connection to logic, and with the catch diode built in. Parallel several channels for your starting current.

A good alternative these days is to use a MOSFET. Use a low VSGth device for direct logic connection, these will have their RDSon specified at 5 V or less, rather than the 10 V of their higher voltage brothers.

If you insist on staying within a TO-92 package, you'll need to check the specifications very carefully.

Not the answer you're looking for? Browse other questions tagged bjt flyback fluid-pump or ask your own question.