This is quite cumbersome for multiple reasons. 1) There are a lot of points for the nonlinear I-V curve 2) Values are added in the "table" as i, v, i, v,... (alternating), which gets hard to keep track of when reading and/or adding/correcting. 3) It's a lot of work whenever I need to add another I-V curve.

It there a better way to add I-V lookup table functionality to LTspice? Can I load a .csv file with the data or something similar, istead of entering it manually into the GUI.

N.B. I've tried nonlinear regression to curvefit and add as a function, but that does not make things easier...

EDIT: Thanks for the feedback, both of you! A fuel cell is simply a source of power. The I-V characteristic determines the operating point, w.r.t. the remaining circuitry and power draw - i.e. voltage is determined based on the current draw, and current is dermined by the voltage.

So the PWL file is not an option, as it assumes a predetermined transient (time) behaviour, which I don't have, prior to the simulation, this is the outcome - altough the PWL file is close to what I am looking for, but without the time dependency.

A fuel cell has a linear region for moderate current, and is nonlinear for low and high currents. So for the middle region, you can model it as a voltage source with a series resistance. But I'd like to add another layer to the analysis. 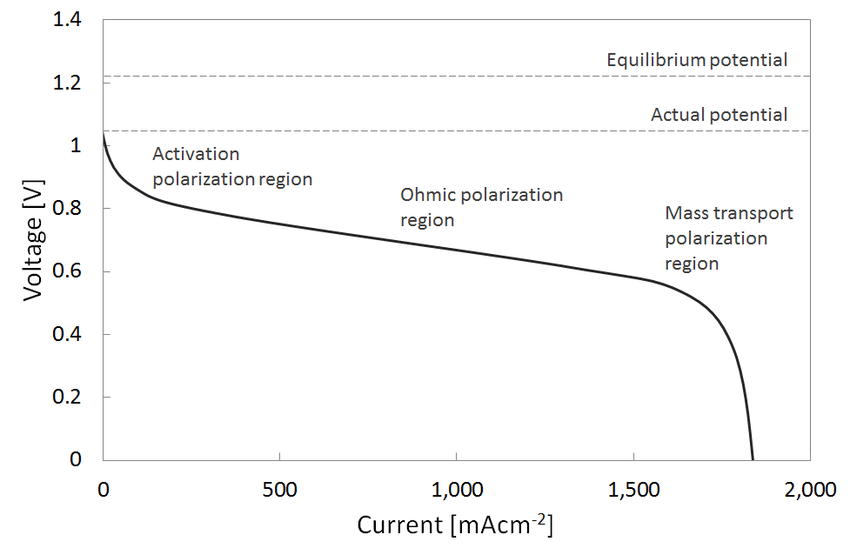 Not sure whether that is what you really need, but I will give it a try. Since your inputs consist of I and V, I suppose you are simulating how this fuel cell is charged. Although not technically correct, you could map one of your variables (e.g. the current) to the time, and import it into LTSpice.

Let's say your I-V characteristic looks like the following, where the first column is the current and the second one the voltage. The csv file can be renamed to IV.txt

By reading out this file as a PWL file with a voltage source, the second collumn is mapped to the voltage. In order to recreate the current behavior, you can model a resistor to limit the current based on the time (current) you need, as depicted below:

Not the answer you're looking for? Browse other questions tagged voltage current ltspice modelling or ask your own question.