How does this LM386 circuit boost bass?

I'm just starting out in Electrical Engineering and was wondering if anyone could clarify a question about the following RC circuit regarding the LM386.

My question is about the following circuit:

How has adding such a small value cap (between pins 1 and 5) in parallel to the internal resistor of the op-amp boosted the bass?

I have been reading the data sheet; under gain control it says the following:

Additional external components can be placed in parallel with the internal feedback resistors to tailor the gain and frequency response for individual applications. For example, we can compensate poor speaker bass response by frequency shaping the feedback path. This is done with a series RC from pin 1 to 5 (paralleling the internal 15 kΩ resistor). For 6 dB effective bass boost: R . 15 kΩ, the lowest value for good stable operation is R = 10 kΩ if pin 8 is open.

But I do not understand how it works, as far as I knew the bigger the cap the less capacitive resistance it has, so wouldn't a small cap (0.033 µf) as in the diagram be more resistive to bass frequencies? I know I have misunderstood something here.

Think of it this way, at low frequencies, the external series RC network is effectively an open circuit so the amplifier behaves as if the network were not present.

At high frequencies, the RC network is effectively just the 10k resistance.

Looking at the equivalent schematic in the data sheet, note that this 10k resistance is in parallel with the internal 15k feedback resistor. 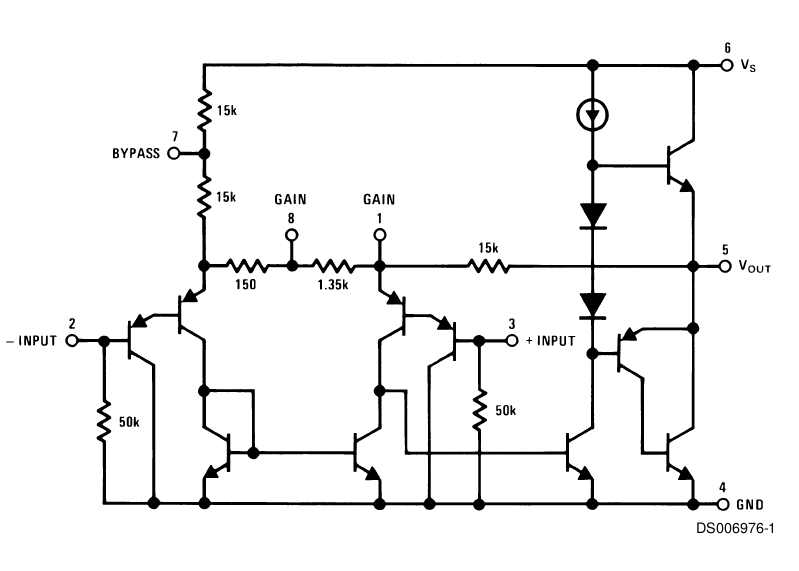 You can cut the gain by reducing the impedance between 1 & 5 in parallel with the internal 15k.

There is a high pass filter with the speaker and high pass negative feedback that cuts the gain by 7 dB with the 10K and increases to 25dB at 100Hz. At least that is what I get with their suggested values and 100 ohm speaker. 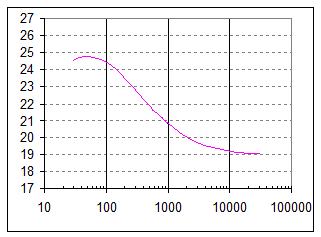 This is what I get with an 8 ohm speaker. 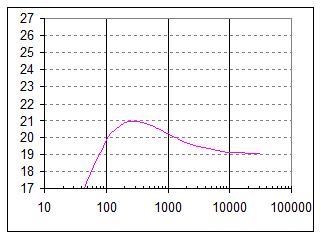 This is what the specsheet shows; Note the differences and note they do not spec the load. 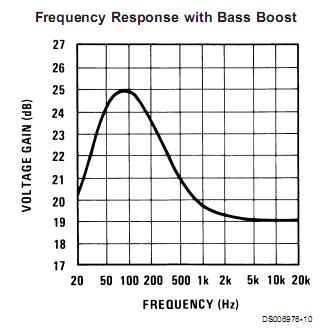 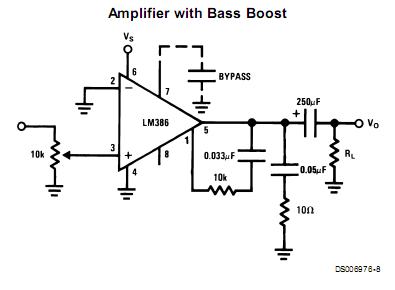 The capacitor is in the negative feedback path, not the forward path, so its increased reactance at LF lowers the NFB, which increases the closed-loop LF gain.

Not the answer you're looking for? Browse other questions tagged audio lm386 or ask your own question.

10
LM386 audio amplifier not amplifying
3
LM386 and low-pass filter
2
LM386 audio amplifier with push-pull output
4
LM386 motorboating that goes away with a resistor in parallel with the bypass capacitor on pin 7
6
Why does this potentiometer in an op-amp feedback path cause noise when adjusted?
0
Audio HPF cutoff frequency selection
3
understanding input impedance theory
1
LM386 circuit design questions