I'm developing an incubator which includes a hot air pump.

I'm generating the heat with 2 40W-12V ceramic resistor from 3D printer conected to a transistor (IRF540N) which is controlled by an Arduino (using PID library.)

For safety, I added an LM35 to check whether the temperature rises over the plastic box melting temperature. The problem I have is that every time I do a measurement (I'm trying to tune the PID parameters) the same strange noise appears almost at the same time (between 200 and 700 seconds.)

Here you can see the schematics for the measurement system:

A0 is the Arduino's analog input. The LM35 and the Arduino are conected with a 1m long mesh cable.

On the other hand, the PID circuit is as follows: 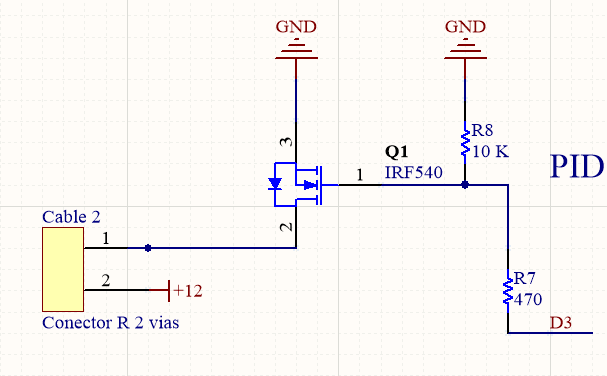 D3 is the Arduino's PWM output.

The error I'm talking about can be seen in the following pictures. It repeats in EVERY measurement but more or less the same shape.

If you were wondering what the PWM signal looks like (I suspect it might have something to do with the ascending signal of the PWM) here it is in a percentage representation:

This signal may change with the PID configuration but the noise is almost the same.

Last but not least, it is worth mentioning that the LM35 is mounted on the same small PCB board where the resistors are.

EDIT: Here you can see other measurements to ilustrate the repetition of the problem (in shape and in time length):

You should have either a series resistor on the LM35 or a compensation network as shown in the datasheet. The resistor or network has to be at end of the cable close to the LM35.

They are quite intolerant of capacitive loading (50pF maximum) so 1m of cable could quite well be pushing it into oscillation.

Note the break in the continuous curve is symmetrical around the dashed red line (0?) and the slope during the anomaly is several times the neighbouring regions.

I don't know what you are measuring it with, but I bet it has some kind of auto-ranging capability, and is switching to a higher gain setting during this part of the range because the signal is close to 0. Then, whatever tool you are using to plot the result doesn't know about the autoranging.

Though I'm going to try fixing the problem with @Spehro Pefhany solution. I don't have any components right now. In the meanwhile, the problem was fixed by lifting the power supply case from the surface where the measurement was being done....

Not the answer you're looking for? Browse other questions tagged arduino noise pid-controller lm35 or ask your own question.