this is my first post. I've been working on creating logic gates from 2N2222 transistors. I've build a basic switch, NOT Gate, OR, NOR, AND, NAND, and XOR (from a combination of the others). However, when I extend this to the XNOR, I get weird results.

I started by building the circuit from NAND, OR, and AND, following this: http://hyperphysics.phy-astr.gsu.edu/hbase/Electronic/xor.html#c1. I then just wanted to add a NOT on the XOR output. I figured this was the best way to build up my knowledge from smaller parts.

When I run this with 3.3V, the circuit (blue or red LED lights up) follows the XNOR truth table. However, when I switch to 5V, I get weird behaviour:

I chose 10K for each base resistor, and 1K for the resistor either at Vcc or at Gnd. I chose 470ohms for the LED output (the LED is 3.0V to 3.2V and needs 20mA). I've tried changing the resistors at Vcc and Gnd to 4.7K to closely match the 5K that the link above showed. Again, this doesn't fix the issue.

I have attached a picture to show the circuit. It isn't too clean, but I hope it helps. This shows the 3.3v setting, and this is when the circuit behaves as I would expect. 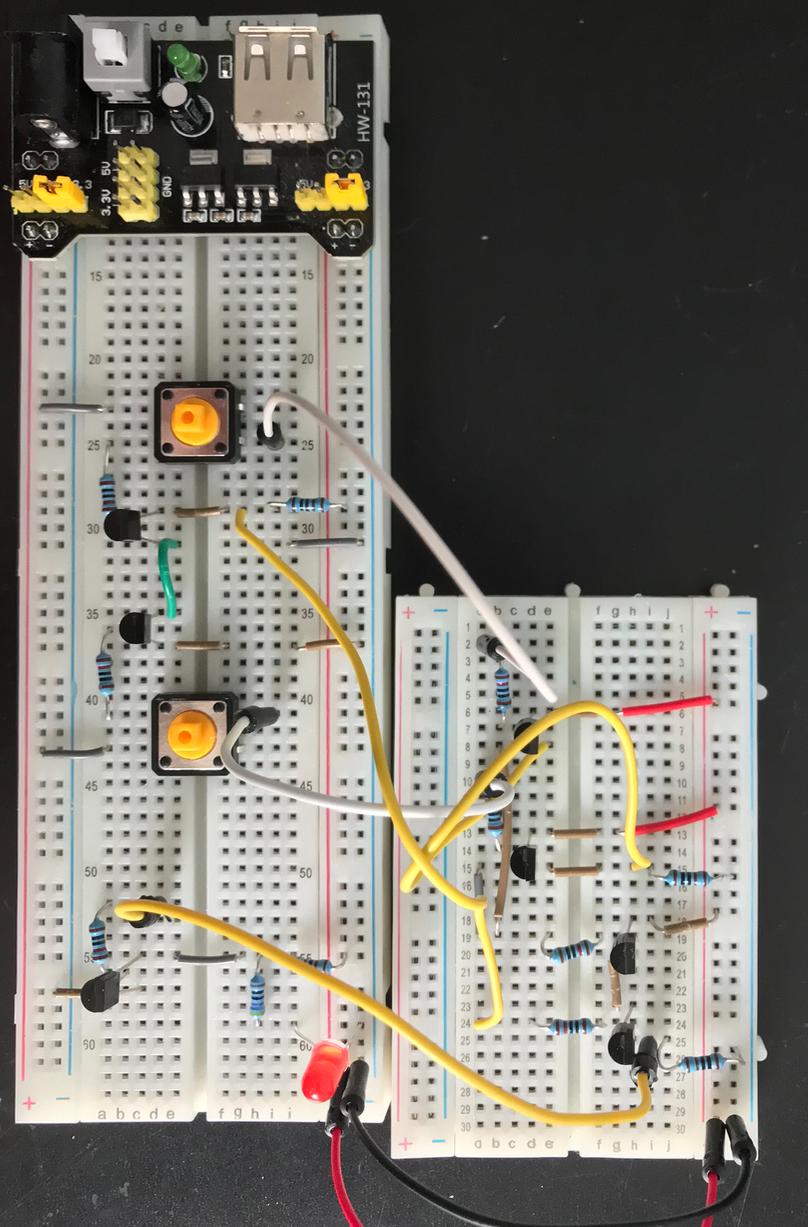 Edit: I hand drew the schematic. I’ll look into a schematic tool or the embedded editor next. 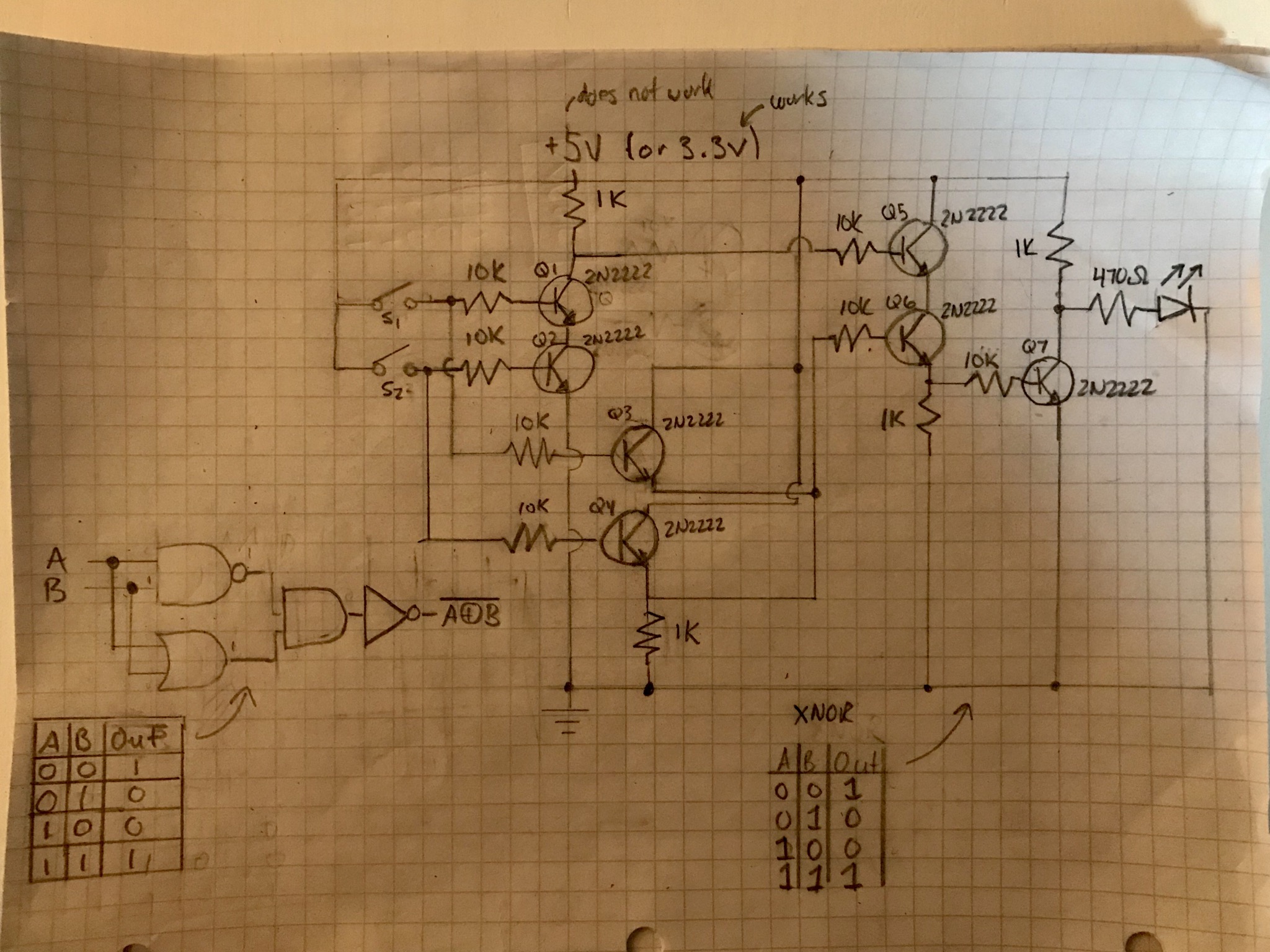 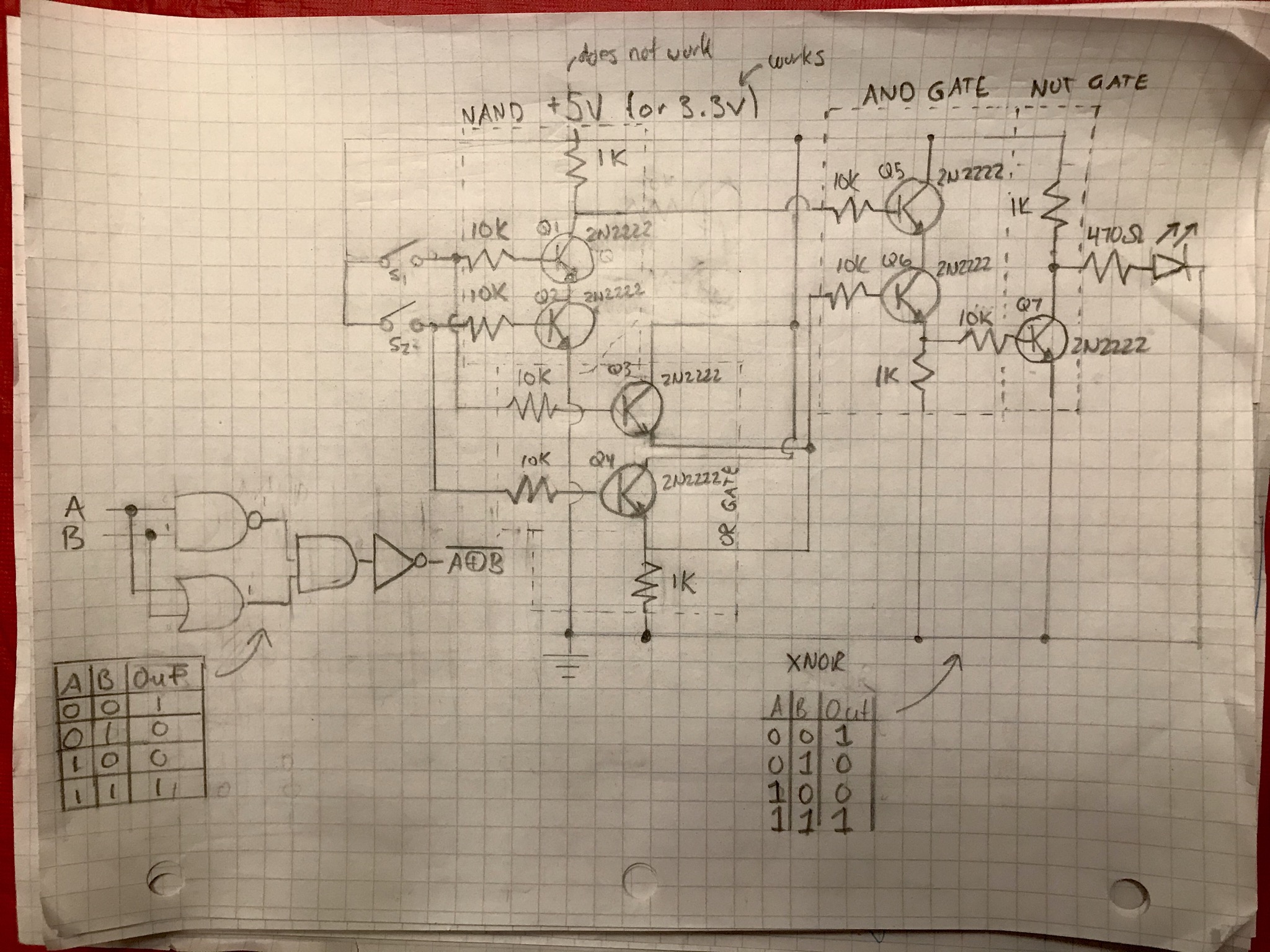 Please review my RTL NOR answer provided a while ago for detailed design and simulation information about RTL gates. In particular, the dual-stacked BJT form of a NAND gate as shown in your drawings is crap. I'm not going to belabor the details why, here. I'll just let you learn from experience on that one, for now. We've other fish to fry.

If you look at the Apollo Guidance Computer Schematics from many decades ago when RTL was used, you'll essentially one and only one kind of gate being used: NOR. There's a good reason for this and you can first read through my RTL NOR answer thoroughly and then attempt to design an equivalent 1-BJT NAND or AND or OR gate and see how well you fare at the problem.

Using the design from my RTL NOR answer, you'd find the following schematic:

That circuit will work fine as an XNOR. And it will do so within managed specifications, too. 21 resistors, with only two different values, and 6 BJTs (only NPNs) for the XNOR. Plus another BJT and 2 resistors and LED for the display output. Probably about \$4-5\:\text{mA}\$ when the LED is OFF and perhaps \$25\:\text{mA}\$ with the LED ON. So, as an XNOR gate itself (no LED) it dissipates about \$100\:\text{mW}\$.

(The inverters above can be further minimized (but with some loss of management) by removing their input pull-downs. But I'd prefer you keep them in place.)

2
How does a microprocessor control its transistors?
4
How to chain transistor logic gates
1
Emulating Logic-AND gate
0
Half adder with soft latching input buttons

8
Single LED single transistor circuit not working
2
A transistor AND gate outputs a small current when one of the inputs is HIGH. Why does this happen?
1
XOR with 3 different OR gates
1
How to build a sequential logic circuit with transistors on a breadboard
0
Confused about battery voltage warning circuit with PNP transistor and Zener diode
6
CMOS transistors for educational purposes
1
Having trouble determining circuit purpose
1
Trouble With Transistor (BC547) in Oscillator Circuit
1
Working out which logic gates need to go where
1
Is it possible to make a XNOR gate only with diodes without using a transistor?