I am trying to design an piezoelectric energy harvester circuit and using voltage multiplier rectifier to build it now.

I am using a piezo film, LDT4-028k as a source and it has 11nF cap inside the film. Based on the datasheet, what should I do if I need to make the input impedance as 10Meg ohm?

What is the reason that my circuit it so inefficient and just can charge a few microvolts at a time?

What should I change to enlarge the charge rate and how to determine the actual value of the components I need to use?

Your piezo sheet is a sensor.

It isn't intended to collect large amounts of energy, and cannot do it.

The datasheet says the load impedance should be kept above 1 million ohms, and preferably above 10 million ohms.

The leakage current through your electrolytic capacitors is probaly higher than the current the piezo sensor can provide.

Throw out all the voltage multiplier stuff.

Use a single diode and capacitor to collect the energy.

Use a ceramic capacitor (or several in parallel) to collect the energy. They leak less than electrolytics.

Use a low leakage current diode.

I'll sketch a circuit for you later when I'm at my desktop computer.

Keep in mind that you will never collect large amounts of energy with that sensor.

No amount of efficiency will allow a butterfly to carry an elephant.

As promised, a simpler version of your collector circuit:

There is still a (Greinacher) voltage doubler in there, but I used it more because it'll help you catch all the AC from the piezo as DC.

The capacitors are the main problem you are going to have. Your piezo can't deliver much energy, and it can't do it quickly. You need good, low leakage capacitors that won't lose the collected charge.

Electrolytic capacitors are out.

Film capacitors would be better, but it is unlikely you will have any at hand.

Working just with common parts that you can scavenge, you'll want to look for the highest value ceramic capacitors you can find. 100nF is the largest common value you'll find.

Put as many of them in parallel as you can.

You may also need to put several in parallel for C1.

The whole thing needs to be well insulated. At the very low current levels you are dealing with, the charge can leak off even through things that you wouldn't expect to conduct. I mean, you can normally ignore the leakage in a capacitor but for what you are doing it is a major factor - and that's measured in microamperes. Resistances in the mega ohm range are a loss of current that you can't afford.

The source impedance isn't really a problem, and I doubt that was what was causing you problems before. The source doesn't see a load until its voltage has risen above the voltage already on the storage capacitor, so the voltage from the piezo can rise with hindrance until it is high enough to pass the diodes and charge the collector capacitor.

This will only do as a demo circuit. Put the piezo in your shoe, and run around. When you stop, reach down and push the button. The LED should flash briefly. That's about the best you can expect.

Good luck. You're going to need it.

I had another go around with the circuit and a simulator. I think you would do well to simplify it further, and to drop any ideas of using a voltage multiplier.

Look at the circuit above. C1 will charge up to the same voltage as the collecting capacitors. That's energy that you can't access, but have to collect. In every doubler stage, you will have one capacitor that you charge but for which you can't access the stored energy. I did a bunch of simulations, and that circuit actually works best when C1 has the same capacitance as the total of the storage capacitors. That means you have the same amount of energy stored in C1 as in the storage capacitors - but you can't use the energy in C1.

AndyAka suggested using a full wave rectifier bridge, so I ran some simulations on a simple bridge rectifier and capacitor collector.

That works much better, and you get access to all the stored energy.

The simulated piezo is just an AC voltage source in series with a resistor to limit the current.

That circuit charges up quickly, and follows the RC time constant for the capacitor and the internal resistance of the piezo. All of the collected energy is available from the output.

I couldn't find any reasonable description of the impedance. When the capacitor is completely discharged, then the piezo will see a low impedance over the duration of every pulse it generates. As the capacitor charges, the piezo will see longer periods where there is no load because the diodes aren't conducting with ever shorter periods where it sees a low impedance. Over time, the average changes from very low to very high impedance.

I tried using a transformer to raise the impedance of the collector. All it did was slow down the charge time for the capacitor.

I looked up a couple of papers (paper 1, paper2) on harvesting energy from piezos. One suggests using a series inductor or alternatively a series switch between the piezo and the rectifier. The other suggests using a buck converter. Both will control the load that the piezo sees.

I tried a series inductor with values from 1µH up to 10kH. There's no noticeable change in the current drawn from the piezo until you get about 100H. All it does is to slow the charge time on the capacitors.

I didn't try the switching setup on the charge side. I don't think you'll be doing that, any way. You'd have to drive an oscillator from the collected energy as you are collecting it.

In any case, those things all relate to trying to control the impedance of the load that the piezo sees - that's including the charge load for the capacitor and the output load.

You are intending to collect energy and dump it out after it is collected, not use it as it is being collected.

Given that, I don't see that impedance matching does you any good anywhere.

According to the data sheet this is a sensor and cannot be used to generate/harvest any usable energy.

If you want to just detect motion or vibration you can of course amplify its signal, but this requires an external power source to actually light up your LED or whatever indicator you wish to use.

I'm not so gloomy about the sensors inability to produce some usable power especially when the "right" harvesting circuit is employed such as this: - 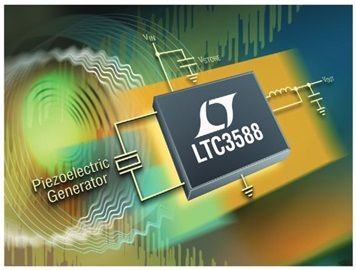 In any case, if it proves to be useless at least you will have a test circuit that is more likely than any other offerings to yield results with the "right" sort of sensor. 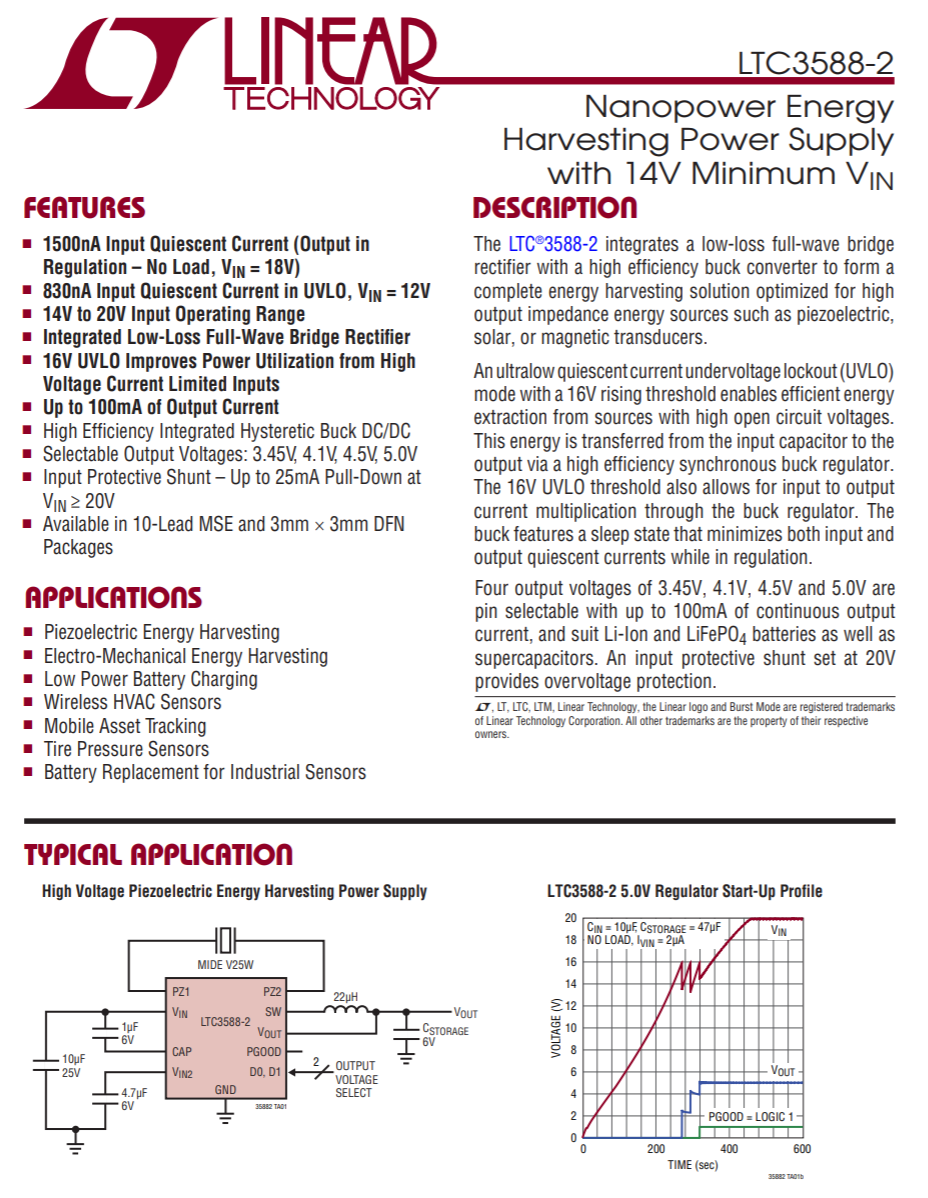 Good luck and come back and tell how you got on. Be gentle i.e. don't go hitting the sensor with a hammer - it can produce 100 volts and the chip above is only rated for 25 volts so, take it easy and gently get to the point where you are satisfied with performance.

Not the answer you're looking for? Browse other questions tagged piezo energy-harvesting or ask your own question.