How to connect the power plane Microchip AN2587 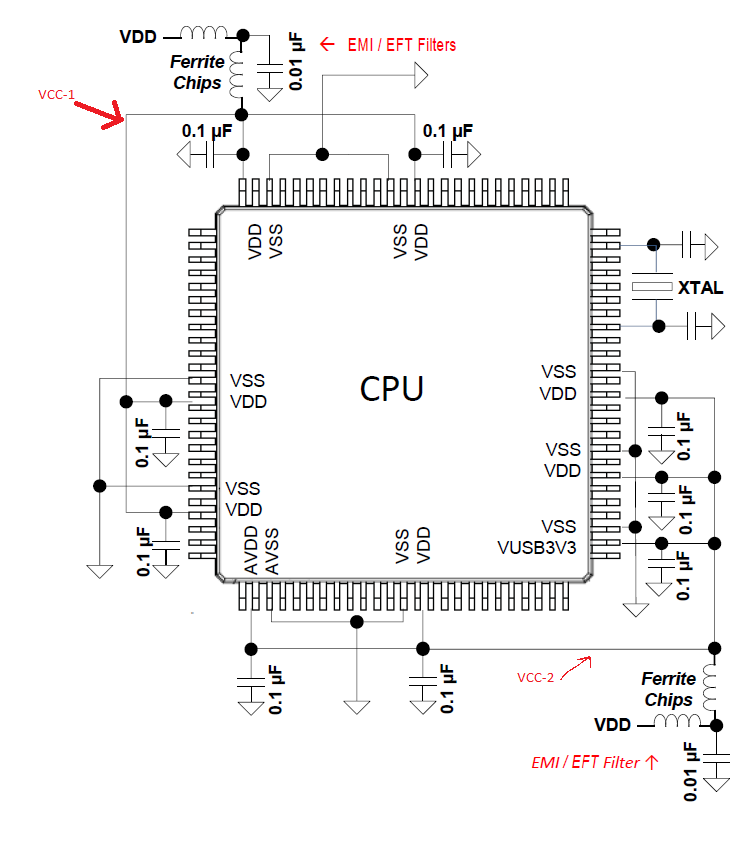 I drew on the picture 2 marks called vcc-1 and vcc-2 , which will become net labels in the pcb desgin.The Board is a 4-Layer stackup (Signal-GND plane-Power plane-Signal) .Now I am lost in what will the power plane be connected to ?

It seems people have different opinions about the subject of grounding, however the way I would do it is by using traces instead of the Power planes on bottom layer, and remove the local ground plane and instead vias directly to the middle GND plane as shown in the schematic of the microchip app note. Also i base on what i read in the same book you mentioned (EMC compatibility). have you read all chapters ?

Which means one ground plane under the signal layer which has its physical area partitioned (imaginary separation) between Sections ( Analog alone , High speed digital alone , I/Os alone ) . The component placement and routing should be not interfere with other sections.

According to the above:It doesnot look like the approach you are using provides the shortest path for current to the main ground plane.

EDIT: There is also a discussion in chapter 3 section 3.2 that discuss Signal grounding and mentions 3 types:

To summarize what the author says:

Single-point is most effectively used at low frequency up to 1Mhz max. It controls how to direct the ground current to flow where we want it. This can be used to decrease noise in sensitive analog circuits. While Multi-point ground systems minimize the ground noise voltage by minimizing the ground impedance which is more important at high frequency digital circuits.

Single-point grounds overcome this by separating ground currents that are likely to interfere with each other and by forcing them to flow on different conductors. This approach is effective at low frequency. However, the signal current paths and long lead lengths associated with single-point increase inductance, which is bad at high frequencies.

Sadly No one answered so after Some thinking and reading mainly the Answer of Olin in Decoupling caps, PCB layout . Also this question was Helpful PCB microcontroller layout in a mixed-signal system

I believe I have come up with a solution.

The Stack up will be:

Note1: The local ground for micro-controller will be connected to the GND plane using a BIG via in the middle.

Note2: The local power is 2 pieces Vcc-1 and Vcc-2 each has a connection to Power Plane after the L-C-L network.

Your Comments are very welcome

In first image top layer is shown , purple is solder mask (shown here to make capacitor pads clearer ) . The line under C9 is the 24mhz clock . all caps are 100nF 0603.

Second image shows the bottom layer . the 2 triangles are Vcc-1 and Vcc-2 . they are connected to main Vdd plane on the top layer after L-C-L network.

Middle layer are not shown in both images to avoid over crowding the view.

Keep going for as many layers as is needed to route your board.

You could consider moving the Vdd plane under the 2 signal layers, though this would make the via length longer and so increase its inductance.

Never connect decoupling caps for a high-speed device to the device with traces if planes are available.

If you think you need ferrite beads or something similar in the Vdd net, put them where the power comes into the plane. But I would do a PDS analysis/modeling to see what effect, good or bad, they may have. Just sprinkling ferrite beads onto the Vdd nets could cause more problems as now you're setting up more resonances that could be excited by switching transients in the CPU.

Not the answer you're looking for? Browse other questions tagged microcontroller power analog layout decoupling or ask your own question.