Why there is no current in the inductor during the first positive half cycle of the ac voltage?

Then why in the graph we see no change in current in the inductor during the first positive half cycle rise of ac voltage from the source?

The graph as drawn is incorrect, or at least is only correct if we assume a switch in the circuit as well, being closed at wt=pi/2.

He could have saved you much confusion by simply starting his graph at the peak of the signal, V=cos(t). Then the initial transient would have been zero, and so could safely have been ignored. 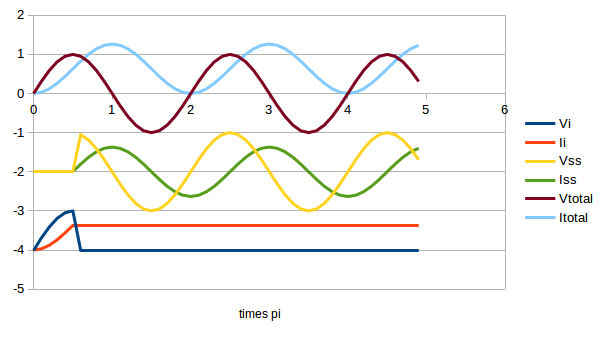 The total voltage is in purple, sin(wt), starting from 0. This is what's shown in your diagram as the voltage.

What your diagram ignores is the initial voltage Vi in dark blue, the bit from wt=0 to pi/2. As it's positive, the initial current Ii, orange waveform, increases from t=0. At pi/2 when I throw my switch, Vi goes to zero, and Ii now continues indefinitely at the same value. Because there is no resistance in the circuit, there is no voltage drop across any resistance to reduce the current. Note that in a real circuit, there would be some resistance, and this initial transient current would die away to zero, with a time constant of L/R.

Finally we can add the partial solutions together to get the final result, Vtotal = Vi + Vss, and Itotal = Ii + Iss.

You'll note the total current is oscillatory, but has a a positive offset. In the real world, this offset would decay due to finite resistance. In the ideal world of your diagram, this initial transient persists indefinitely, as it would in a superconductor.

This diagram illustrates quite nicely why transformers and inductors have an 'inrush' current and need time delay fuses. The 'design' current of an inductor or transformer primary will be the green Iss curve. You'll notice that the peak of the light blue Itotal curve is twice the Iss peak, which usually exceeds the saturation current of the core, leading to a dramatic loss of inductance, and so a large further increase in current.

You may think that both the Iss and the Itotal curves continue indefinitely, and you'd be right. So why are we splitting out a transient and a steady state case? The answer is that in the real world, resistance causes the initial transient to decay, and so eventually at large t, regardless of the switch-on phase which determines the transient, the transient decays away and all current curves end up as the Iss curve.

The waveform is wrong. You are correct, the current should rise during the first half cycle. When the power is switched on, there is an initial response that is different from the steady state response. That is not shown in this case.

To see what it looks like for switch-on at voltage zero crossing, look at the answer by @Andy aka here: What is the difference beteeen a solenoid's make current and inrush current?

Image from that answer:

The current starts to rise from zero as soon as the voltage begins to rise from zero. Since there is no reverse current at the start, the current rises above the normal steady state AC current. It keeps rising until the voltage reaches zero. Since the current rose higher than normal, the reverse voltage does not take the negative peak as low as it will at steady state. The current is a sine wave, but it has a DC offset that lasts for some period of time. The decay of the offset assumes that this is a real circuit with losses rather than and ideal circuit with no losses as shown in the diagram question.

Not the answer you're looking for? Browse other questions tagged ac inductor electromagnetism or ask your own question.

1
What is the difference beteeen a solenoid's make current and inrush current?
1
Response of a RC circuit and Frequency Response Theorem

2
Calculating voltage spike of an inductor
1
How does inductor resist the increasing dc current?
3
Why is there a sudden change in current between \$t=0^{-}\$ and \$t=0^{+}\$ when an active inductor is connected in series with a relaxed inductor?
1
Voltage across inductor immediately after the switch is closed
2
Current waveform in an inductor with AC source
3
How to analize an ideal diode circuit with sinusoidal sources and storage elements (inductors and capacitors)?
1
Understanding the voltage across the inductor in a boost converter
3
Voltage and current during the first cycle of RL circuit
0
Voltage spike on the swtich in an inductor circuit