In a buck boost inverting converter is there any difference exchanging the position of the diode from the positive to the negative rail?

In a buck boost inverting converter is there any difference exchanging the position of the diode from the positive to the negative rail keeping the same current rotational direction ? 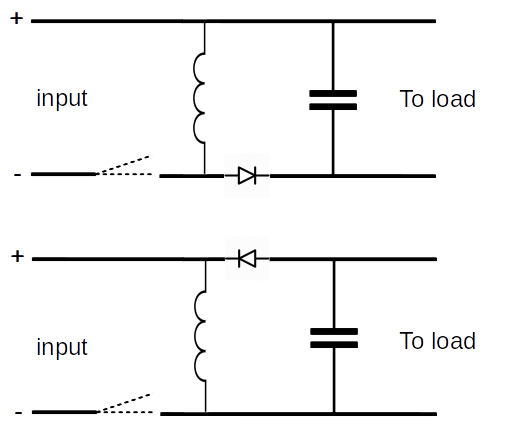 In your second circuit, the switch is directly connected between the input and output, and this means that the signal on the switched node is directly connected to the output, meaning that the output is not referenced to ground, so that circuit is probably broadcasting RFI all over the place, which will not only make you unpopular with the neighbors, but it will also hurt efficiency.

A normal buck-boost, which is your first diagram if "+" is considered to be ground, shares the grounded end of the inductor between input and output and takes the inverted rail from the switched node via the diode.

The difference is in the mechanism by which the energy is transferred. In the top diagram, the charged-up inductor pushes its energy through the diode (at the bottom position) into the capacitor's bottom plate, while the top rail remains anchored to the rest of the circuit, establishing how the voltage potential relates to the rest of the circuit.

The ways that they are about equivalent is they will both give about the same power output (equivalently, about the same voltage into the same load). So if you're powering a set of LED's, or a portable soldering iron, for instance, you should be able to use either circuit.

But the voltages at the output will be different relative to the rest of the circuit.

It may be useful to think in terms of a shop vac attached to a very air-tight cardboard box. A shop-vac has two ports, a suction port, and a blower port, and depending on what you need, you attach to the appropriate port. Either way you transfer energy. But if you connect the blower port to the box, it will deform outwards as it experiences an air pressure above atmospheric pressure. If you instead connect the suction port, the box will crumple as it experiences negative pressure in relation to atmospheric.

Assuming you don't lose any air, and a perfect shop-vac, you will keep transferring the same amount of energy to the cardboard box until it either explodes or implodes. But you used the same energy pump to do it. 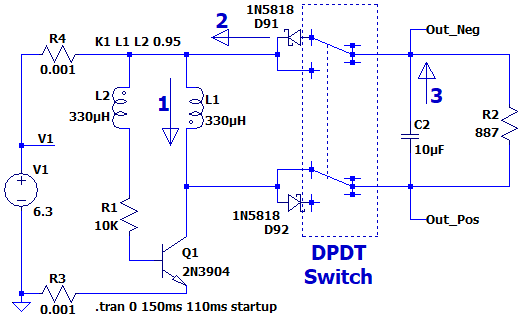 Here are the LTSpice simulation numbers: 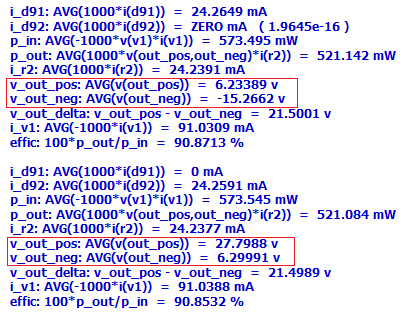 The red boxes show the only significant difference between the two topologies -- the voltages of the bottom and top output rails. Hope this helps you to "see" it.

Finally, here are the two traces for the two output rails (as once again suggested by Jasen):

Not the answer you're looking for? Browse other questions tagged buck boost converter or ask your own question.