First question: Can someone explain how a AC power source together with this topology can charge the capacitor? How does the process works?

how does the resonant charging behave in this topology? How does the pulsing works via a transmission line transformer TLT?

The capacitor isn't charged by AC. The cascaded transformers aren't anything unusual: the first transformer steps up the 50Hz AC to 3 times the voltage, then that voltage is further stepped up again by the second transformer by 360 times. This effectively steps up the input voltage \$ V_{1} \$ by \$ 3\times360=1080 \$.

This appears as your same 50Hz AC sine wave across the secondary of the final transformer as measured at the TRANS_OUT node, only with the voltage stepped up by a factor of 1080: 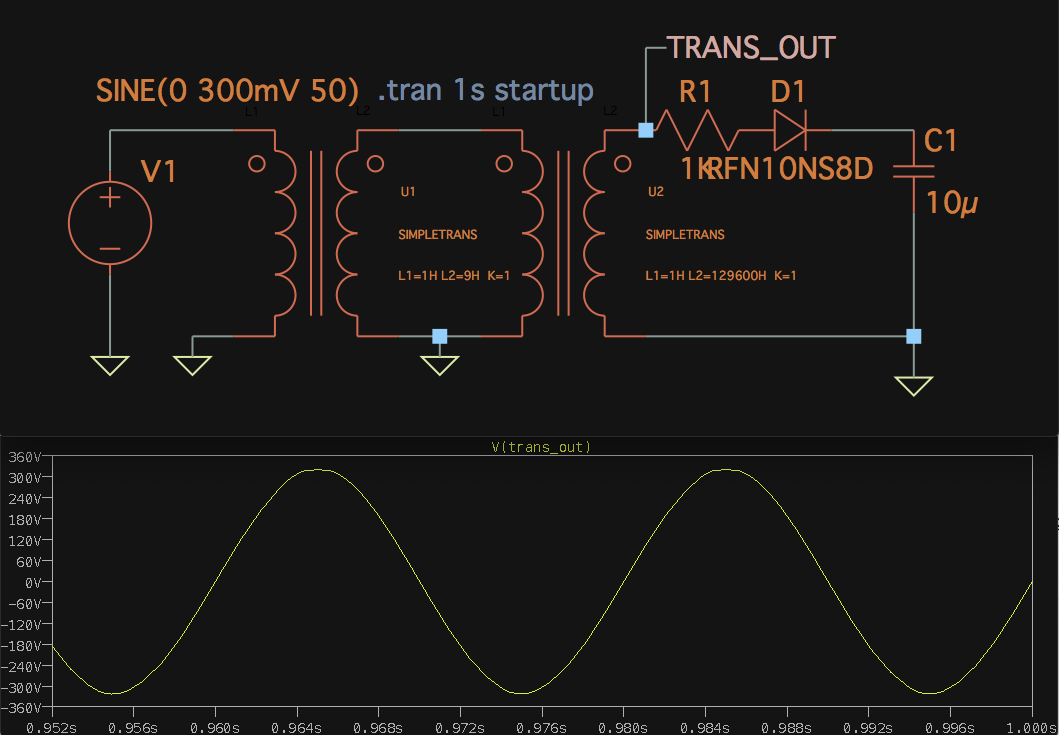 However, while the voltage across the secondary winding is AC, the diode converts the AC to DC. This is somewhat simplified of course (how diodes work is a whole topic unto itself), but the gist is this: regular PN junction diodes can be thought of as directional switches, or one-way valves. Once a diode is sufficiently forward biased (the tail or anode of the arrow is at a higher voltage than the tip of the arrow with the line, or the cathode), this turns on the diode/opens the valve, and current can flow through it minus a small voltage drop across the diode (this is the voltage that was required to forward bias it, usually called the forward voltage or \$ V_{f} \$). However, if the diode stops being forward biased, and instead becomes reverse biased (the cathode, or tip of the arrow is at a higher voltage potential than the anode, or tail of the arrow), this turns the diode off hard and it will not conduct.

Let's get rid of the capacitor for a second and replace it with a resistor. This will let is see what the voltage looks like on the other side of the diode, as measured at the DIODE_MADNESS node: 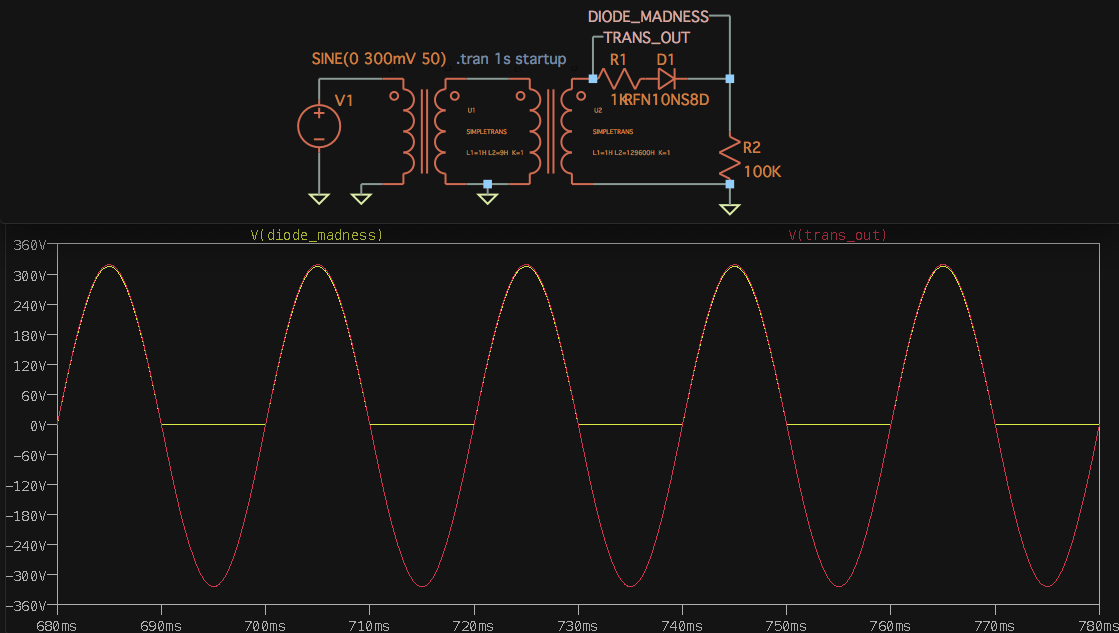 The DIODE_MADNESS node in yellow, and I've overlaid the TRANS_OUT node in red.

See, it is no longer AC, but rather pulsed DC. And just so we're clear, AC current reverses direction, while DC flows only in one direction, but doesn't necessarily need to be constant. The voltage no longer goes below 0, current only flows in one direction as a result even if it isn't a constant flow. Hence the usage of the term pulsed DC - it is DC that is, well, pulsating.

Let's put the capacitor back: 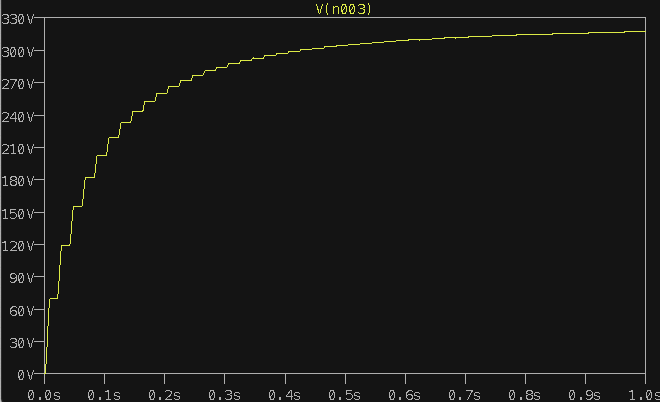 This results in a fairly straight-forward RC charging curve, though with some jaggedness that occurs each time the AC is in the opposite polarity.

During the negative half of the AC wave where it would normally reverse direction, the diode simply does not conduct and the capacitor is also unable to discharge through the diode because that would also be in the reverse biased direction and turn off the diode.

Note: the resistor in series with the diode can be ignored, it simply limits the charging current for the capacitor.

As for the second topology, it is not possible to give an answer with the little information you've provided. S1 is not a valid schematic symbol, making the schematic unreadable. If you can post a valid electrical schematic, or maybe provide the source of those two screen shots plus the entire schematic rather that the absolute minimum amount of information, it may be possible to infer what S1 is. Normally S would denote switch, but that is not a valid schematic symbol for any kind of switch. My only other guess is that it is a spark gap, but that wouldn't make much sense and the symbol would still be incorrect for a spark gap.

If you're able to provide a valid schematic or enough information to read the incorrect one you've provided, I'll try to update my answer to explain the rest of your question.

Final note: In the comments, you mention seeing a sine wave at the diode. If the voltage exceeds the diode's reverse voltage blocking capability, depending on the spice model for the specific diode being used, it can (quite correctly) simulate the reverse breakdown of the diode, rendering it ineffective. Make sure you're not shoving 1kV across a 600V diode in your simulation.

The transformers increase the voltage, the diode rectifies the output into the capacitor, and the capacitor charges. Perhaps look up diodes or transformers on wikipedia to understand what they do if that's still not clear enough.

What may be worth expanding is how transformers deal with a DC load like this. In practice, the DC output current pushes the magnetisation of the transformer core away from zero. This produces an offset in the currents flowing, which produces an offset in the voltage drops due to winding resistance. It's these asymmetric voltages that eventually counter the flux offset, and allow the average voltages across the inductors to stay at zero.

Not the answer you're looking for? Browse other questions tagged capacitor charging or ask your own question.