I'm looking to implement ADC and DMA with HAL on a F767. I want the ADC to be always converting and storing to memory via DMA until it reaches the buffer limit of 320 and then I want to go to a conversion complete callback function. ADC seems to be enabled fine and it converts values up to the buffer limit and then it goes to the conversion callback routine. The problem I'm having is when I check the ADC buffer in the conversion complete callback function is that the first half of the ADC buffer (exactly the first half, 0 to 160) is full of these values when the ADC input is ground: 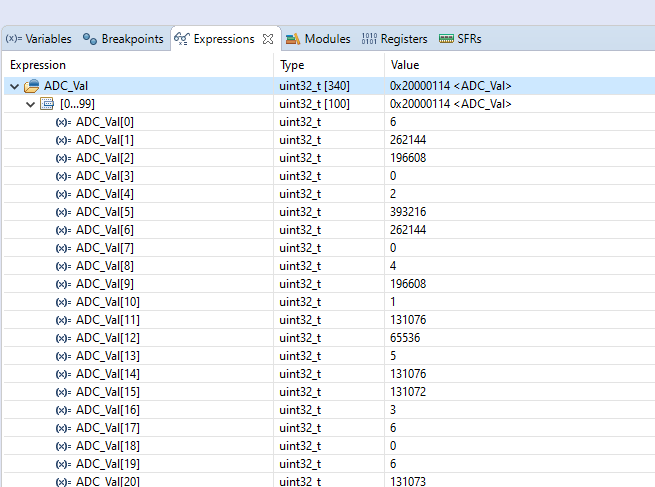 I'd expect values anywhere from 0 to about 15 at the worst, so it is partially consistent.

When I connect the ADC to 3V I would expect close to 4096 but instead I get: 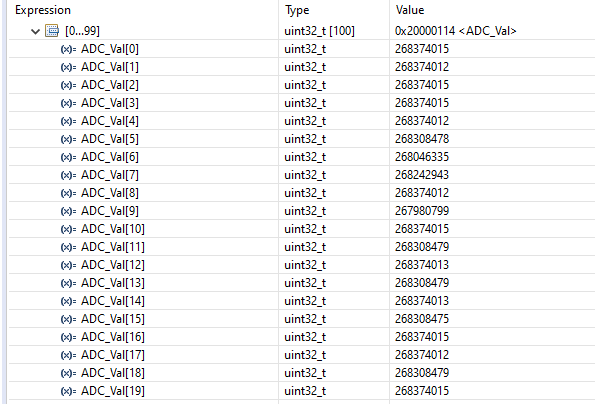 As the values ARE lower when the ADC is connected to ground and higher when the ADC is connected to 3V they're not completely garbage values, it's not just random values stored in memory. Also, after the first half of the buffer, everything is just zeroes so I'm thinking that maybe I've configured the ADC wrong or reading it wrong. I'm assuming that because the DMA stores the values in the array I just need to check the array during the conversion callback function but this doesn't work. The buffer size and DMA call

And the ADC initialisation:

and my conversion callback function:

Is there anything here that is obviously incorrect? If not, what is the best way to approach debugging of the DMA and the ADC?

It isn't a 32-bit ADC yet you are interpreting its outputs as UINT32.

So those values all look fine to me.

I could do the same for the "3V" values but I'll let you do that.

Not the answer you're looking for? Browse other questions tagged adc stm32 dma or ask your own question.