I've been trying to get this simple FM transmitter to work over the past few days and I could use some help in a few areas.

First iteration was on a breadboard with all parts included. The exception being I didn't have a 0.1uH coil handy but I had another coil rated at 0.7uH (using my LCR meter). I also didn't have a C4 value of 4.7pF but I had a 10pF value. I figured I could just tune it later. I hooked a scope up to it and got no oscillation. I tried connecting the probe to the gate and the collector separately and together. Still no oscillation.

Second iteration. I removed the audio component of the circuit. Essentially everything to the left of C2. I had gotten that working no problem anyway so I figured I would concentrate on the oscillator. This time I tried different values for the inductor ranging from 20uH to 1mH and different fixed values for the variable cap (10pf, 20pf, 30pf). These were all ceramic caps. No love.

Third iteration. I tested the transistor to make sure that wasn't the issue. Seems fine. PN2222A variety. (Also tried 2N3904 and BC547). I then modeled this up on a piece of perf board. I even found a SMD inductor of 0.1uH so now I thought I would be good. Tested all the pieces on the meter before installation. Still nothing. I'm not seeing anything on the spectrum analyzer either.

I know there are a lot better FM transmitter circuits out there I was just experimenting with this (and others like it) and couldn't get any to work.

Not on a breadboard. Not ever.

The capacitance between rows is about the same as the capacitors you are trying to use.

The inductance in each row is about the same as the inductors in your circuit.

I think you'll find that all the videos that show that circuit have the circuit built on a piece of perfboard.

On another forum I fixed in 5 steps an FM transmitter that was the exact same circuit as yours:

2) The bass response was very bad so I increased the value of the audio coupling capacitors.

4) The radio frequency changed as the battery voltage ran down so I powered the oscillator from the 5V regulator, reduced its emitter resistor value and increased its base bias resistor value.

Since a radio circuit will never work when built on a solderless breadboard I built it compactly on a stripboard. It works fine and sounds great.

EDIT: My C5 is 1/21 the value of yours because yours cut all medium and high audio frequencies. 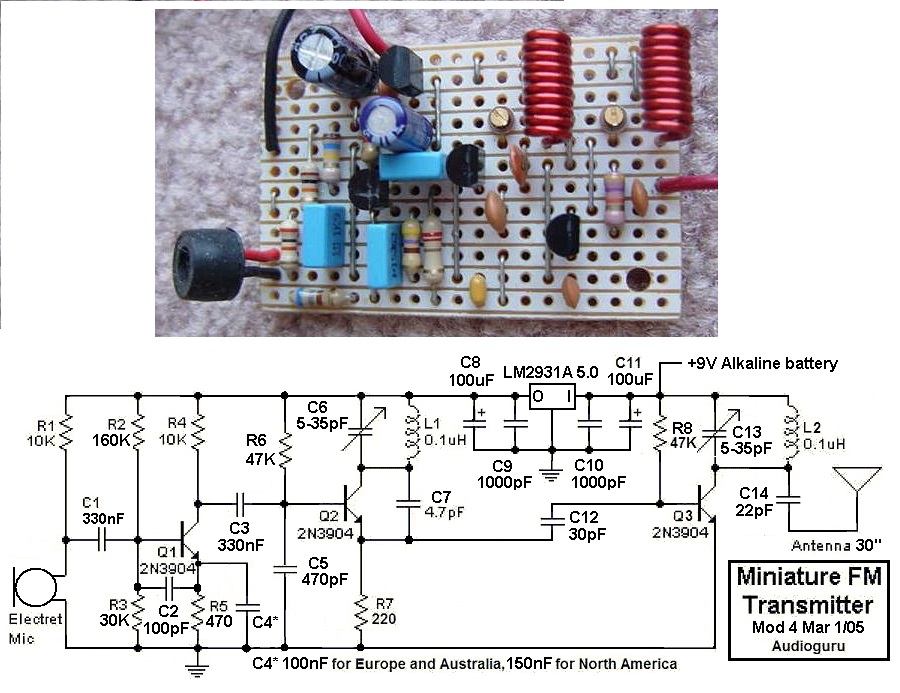 Often the VDD/gnd path is part of the circulating-energy path.

In this circuit, looks like the emitter resistor is more of a "constant current source", and the RF-circulation-path is the 4.7pf thru the large bipolar's Cemitterbase and back to VDD thru the base-collector bypass.

Not the answer you're looking for? Browse other questions tagged oscillator transmitter fm or ask your own question.

1
My FM transmitter never works, Why?