Why does this input pin stay high? 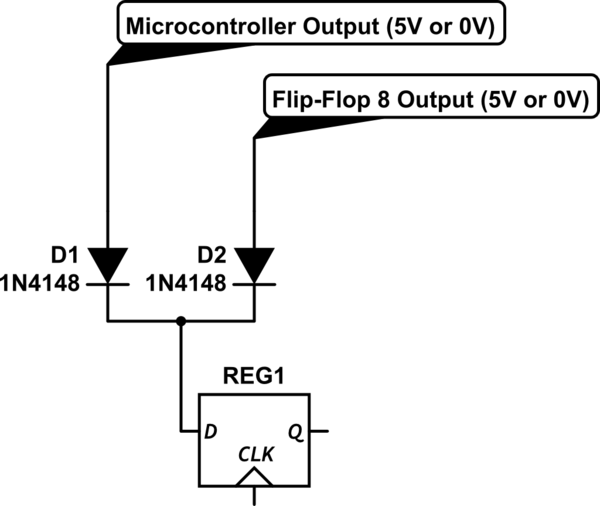 I am working on a project with some 8-bit D-Flip-Flops (using CMOS logic), feeding the first output into the second, the second into the third, and so forth. Only one of the D-Flip-Flop outputs should be on at any given time.

I believe I've set everything up properly, but there are two inputs to the first cell: the microcontroller, which can drive it arbitrarily high or low, and the cascaded output from the last cell, so it can loop indefinitely.

I didn't want to run into trouble where I was driving competing signals into this "bus" (I.E, low from the microcontroller but higher from the cascaded output), so I placed a diode (1N4148 IIRC) pointing from the source to the input pin of the D-Flip-Flop. So to clarify, I have the following:

I figured this would help avoid problems. Unfortunately, it seems to be doing something different. Even when (and I've measured carefully) both inputs (the microcontroller AND the final output) are LOW, the input remains HIGH once it has been set high by either one of the inputs.

Why is this happening? My initial guess it just the input capacitance of the pin holds that charge there, but I would think that would eventually dissipate (but it doesn't seem to, even after a number of uS (haven't tested it longer, but that's already too long for my application)). When I added a pull-down resistor of 100K, it began working as intended. I'd rather avoid putting more hardware (even just a pulldown), but I really want to make sure I'm understanding exactly what's happening before I make design changes.

Add a pulldown resistor to discharge the parasitic gate-source capacitance of the input MOSFETs of the flip-flop.

It can't drain backwards through the diodes when the anode of D1 and D2 go LO so once charged HI it stays HI.

Not the answer you're looking for? Browse other questions tagged microcontroller voltage diodes flipflop cmos or ask your own question.

10
Protecting Microcontroller Input Pins from Soft Power Switch
0
Sporadic Clock Signals from Momentary Switch
1
Does the output of JK Flip Flop toggle continously?
1
How can the flip flop neglect clear when given output is given as feedback?
3
PRESET and CLEAR in a D Flip Flop
1
D Flip Flop Toggle — Q into Hex Inverter into D, Unstable Output, Help
6
Detect the first rising edge of 3 input signals
0
Can you have different clocks working at different intervals to operate a flip flop?
0
Detecting rising edges from two different inputs