Why is the base resistance suggested to be one-tenth of the emitter resistance times beta?

The factor of 1/10 is a crude, rule-of-thumb rule used to design voltage-dividers, where a load resistor may be connected to the output.

If you want your voltage-divider to maintain a certain output voltage, even when a load is suddenly connected, then the parallel-R of the two divider-resistors must be much smaller than the value of the added load resistor. (Or equivalently, the current normally flowing through the two resistors of the voltage-divider needs to be far greater than any output-current delivered to an external load resistor. That way the load-current will only "pull down" your desired value of Vout by a small percentage.)

The factor of 10X current, or 1/10th resistance, keeps the Vout of the divider from changing by more than roughly 10% when the load-resistor is added. (If you wanted the factor to be only 1%, then instead use 1/100th as your rule-of-thumb value.)

Think: if you measure the Vout of a typical voltage-divider by using a 10meg DMM voltmeter, the voltmeter will seem "invisible," and won't unexpectedly alter the Vout value. At least, not by much. Heh, now try doing the same using an old-school analog voltmeter with a 5K impedance! Depending on the two resistances used in your divider, the current being drawn by the added voltmeter may totally change the Vout, or even reduce it almost to zero!

Remember, with R1 and R2 disconnected, any AC ohmmeter "looking" into the transistor's Base terminal will not "see" the Re resistance. Instead, the meter will report a much larger value of Zinp = β * Re (or 750K in the AOE example, where β=100.) This 750K value acts as the "load resistor" to be connected to the output of any voltage-divider placed on the transistor Base.

The easy way: Chose R1 to be less than twice 750K/10, or 150K. Then calculate the value of R2. The resulting voltage at the Base won't be exactly 8.1V, but will be pretty close. (If you needed it much closer, then make your R1 and R2 roughly 100x smaller than 750K!) The hard way: calculate the exact values of R1 and R2 while the 750K resistance is already connected to the output of your voltage divider. (Maybe you only need one "pull-up resistor," where the 750K resistance serves as the "pull down" for the divider process.)

The end result here is a "voltage-input amplifier," where Base current is just a small and unimportant "leakage" current, and beta is irrelevant. (Beta must be high, far higher than ten. But its exact value is irrelevant, as long as Ib "input leakage" ends up being far smaller than Ie "output signal.")

And finally ...ask yourself what would happen if this transistor circuit was manufactured, and the beta for the part number being used may vary: soldering in transistors where beta can be anything between 80 and 300. That 750K value won't stay the same across a population of products! We want our voltage-divider to mostly ignore the presence of the transistor Base current. (We want to make the Ib into a small undesirable leakage, same as with FET stages.) In other words: transistor beta needs to become unimportant, and this is done by making R1 and R2 have fairly small values. (The same is done with op-amp input-networks, where the diff-amp stage is roughly the same as two common-collector stages, and the input to the two Base terminals is a voltage signal, not a current.)

Are BJT bipolar transistors driven by base current? Or are they instead controlled by Vbe voltage? Well, go and ask Win Hill, author of "Art of Electronics," see...

@wbeaty already gave an answer in regard to the voltage divider, and why you don't want to load it too much. But here's another way to look at it, and I think is relevant in BJT biasing. \$\beta\$ is not a constant (highly dependent on temperature) and thus it will make the collector (and therefore emitter) current, susceptible to the changes in \$\beta\$. This will disrupt the Q point of the amplifier.

Think about the following configuration, with an emitter resistor: 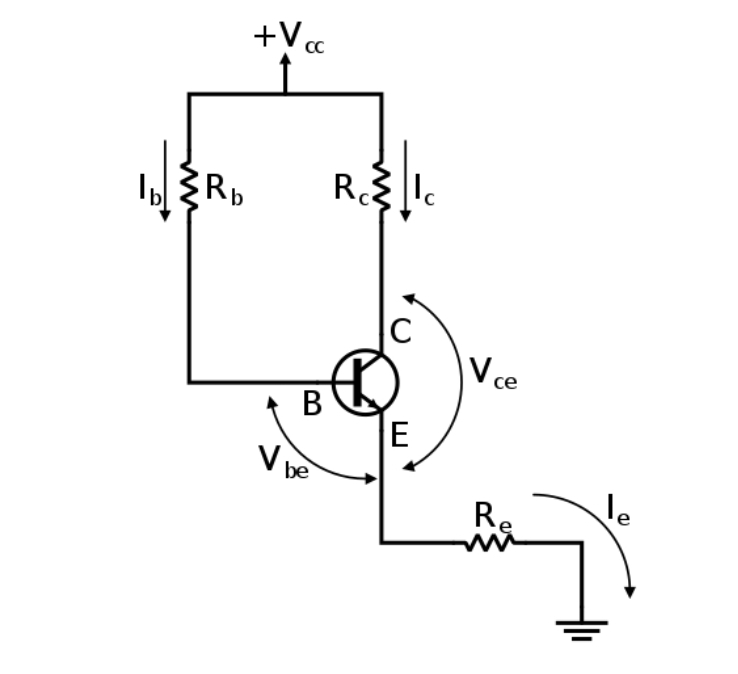 The collector current turns out to be:

That last equation is pretty much independent of the variability of \$\beta\$ so long as (2) is met. You could make that assumption, if for example, \$10R_B=(\beta +1)R_E\$, but that's just a rule of thumb (eg. you could make it a factor of 15 or 20). Note that this will work the same if you had an input voltage divider, instead of the single \$R_B\$ shown, those two resistors would combine into a Thevenin equivalent resistance, but the same concept applies.

Not the answer you're looking for? Browse other questions tagged bjt emitter-follower or ask your own question.

4
Transistor design with beta variation
1
How does a transistor make a signal copy?
1
Emitter follower biasing with voltage divider

4
Stiff Voltage Divider Bias for an Emitter Follower
1
Emitter Follower Current Gain
5
Designing a stiff voltage source using an emitter follower
7
Why the base current decreases automatically?
0
Why does the emitter follower clip?
0
Why base current is affected most on changing beta in voltage divider bias configuration of BJT?
1
Emitter follower biasing with voltage divider
0
In Emitter Follower BJT circuit Why the parallel resistance of the biasing resistors to be 1/10 of the Rin and not their series resistance?
2
When base is open, is the base-emitter junction reverse biased? How does leakage current from collector to emitter flow?