How will equivalent EMF and resistance of cells be calculated 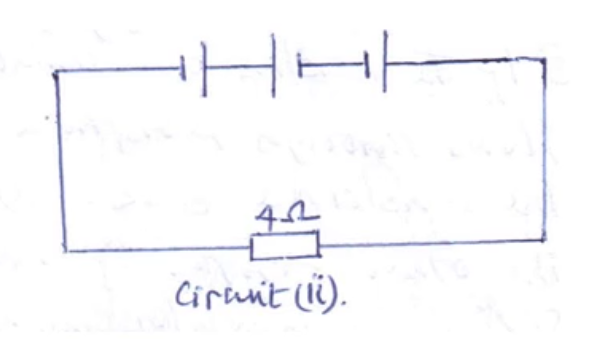 What does this mean for the total EMF and resistance of the cells?

I speculate that the total EMF and resistance will be calculated as though the centre cell were connected in parallel to the other two. Assuming each cell has an EMF of 1.5 V and constant internal resistance of 2 ohms, this would give a total resistance of 4/3 ohms.

As for the equivalent EMF, I speculate the EMF for the centre cell would be -1.5 V and then the total EMF would be +1.5 V. Is this calculation correct?

What you have here is just a series connection of batteries, with one in the middle being connected with reverse polarity. To find the equivalent voltage you’d add the voltages according to Kirchhoff voltage law. The result is (from left to right) =1.5V -1.5V + 1.5V =1.5V . Also since they are in series there internal resistances would add and give a total resistance of 6 ohms.

Not the answer you're looking for? Browse other questions tagged circuit-analysis resistors resistance electricity emf or ask your own question.