Can I simply hook up an opamp inputs, (either using a differential or in-amp topology that is/are also powered from a floating power supply), across a device under test that itself has exceeding voltages for the opamp (<50Vdc) ?

so idea is to build smth that uC's ADC can measure and eventually for PC to read (via serial).

The DUT can go as high as 50V and is only DC. Differentially I am not expecting anything higher than 2-5V across the inputs, worst case.

Thus I was wondering, How does a multimeter achieve differential measurement ? Without worrying about the voltage that the measurand is actually at, as long as the voltage between probes remain in the spec, I'm fine... (I do not want to build a multimeter (nor differential probes), but the functionality is the same...).

-> My understanding is that I should be able to hook up an independently powered opamp (dif-amp, in-amp ?) across another device's resistor, read out the voltage drop (by subtracting one input from another), without being connected to the ground with the Device Under Test. Right ?

I have tried to simulate different topologies but to no avail. At least Micro-Cap won't simulate floating power sources that well.. it seems.. I get errors and strange values.

a) If simulation won't allow me to detect floating power source, do I really need to connect the DUT and my measurement circuit to common GND at one point ? - Meaning the common mode voltage range should become an issue as both systems are tied to single reference... for me it doesn't add up.

I'm also referencing few topics, which should've lead me in a somewhat correct direction, but seems I'm missing something. I also started to think about possible grounding issues and reference points:

A question about differential measurement system

Ok, came here to post what I was missing and found that Finbarr already mentioned this in the first post's comment as well:

"How does a multimeter achieve differential measurement?" It doesn't have to. It uses the common input as ground and measures the voltage at the other one. – Finbarr

Yes, so I didn't set my reference right.

As long as I reference my opamp's one input to the floating GND I can measure directly what the other input sees. So differential for the otherf loating system as long as I put my opamps GND in the correct place.

I built this circuit. Non-inverting amplifier with gain of ~10x Simulated with some dummy loads and it seems to measure small voltage drops very nicely. Just enough for my purpose. 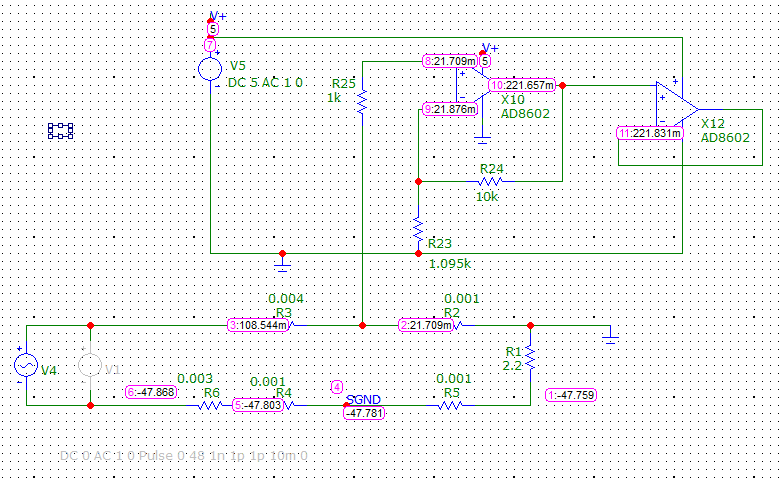 There I measure across R2 so that non-inverting is on the high side and the non-inverting input - which is actually my measurement-circuit's ground is on the low side of the 'DUT' - thus it makes sense in simulation as well.

In my use case I won't worry about the common-mode voltage range. The inputs location is fixed (such as in the simulation) and the voltage between the op-amp inputs cannot exceed +-6V there. So I should be fine.

Added an extra buffer stage in the end so that the ADC wouldn't load the first stage's feedback circuit. This might not be a problem, but I added it just in case, since I had a spare opamp in the package.

Short answer to Q1 is YES, provided some precautions are met. It's advisable to have some input protection when GNDs are seperate. You might care to think about leakage currents from the psu but for a differential measurements that's likely not an issue.

A multimeter measures differentially because it has no ground. It's like an entirely floating device. The measurement is of whatever you care to probe with the two leads.

You could make a differential measurement in software as you suggest but I'd be concerned about sampling both inputs at the exact same time.

Your best bet IMHO is an 'instrumentation amplifier' configuration. Similar to your 2 buffers idea. It has quite high input Z but a truly differential amplifier betters it. 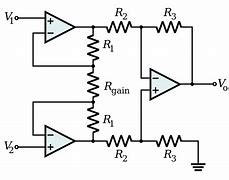 The second stage has a gain of R3/R2

OTOH, this differential amplifier from Analog Devices appears to be the 'bees knees' ! The specs sound insanely good at a glance.

Not the answer you're looking for? Browse other questions tagged adc single-supply-op-amp differential-amplifier floating or ask your own question.