Could an analog TV signal be transmitted over broadcast RF from a composite cable somehow?

My understanding is that an analog video signal (PAL or NTSC) has a particular form/structure.

Composite video is where a single video signal goes down a cable with RCA connectors at each end and is displayed on an analog TV.

Analog televisions do not need to be "tuned in" to the composite cable signal.

So I have a few questions:

I understand that the composite cable signal does not have audio, but apart from that, what is different?

What frequency is the signal transmitted down the composite cable?

Would it be possible to transmit at a different frequency down the composite cable, say for example at a frequency range that an analog TV could pick up?

And if yes, would it be possible to just have that signal transmit into the air, effectively making the composite cable a transmitting antenna?

Composite video is widely used for surveillance and auto backup cameras, because it only requires a single coaxial cable to connect. The strongest "frequency" associated with it is about 15.7 kHz (horizontal sweep frequency) in USA-NTSC, and varies from country to country. The frequency bandwidth, however, is circa 4.5 MHz. Vertical sweep frequency (for USA-NTSC) is 60 Hz. More accurate standards applied to analog broadcast (but for a home setup, accuracy is not vital).

Yes, there are boxes that will convert video and stereo sound to broadcast analog TV (usually analog channel 3 or 4), Radio Shack 15-2526 and with a bit of power boost, you can drive an antenna (there are low-power allowances for such 'broadcast'). The 'multiple' available frequencies are... only those two, channel 3 or 4, with most such boxes. Channel 3 spans 60 MHz to 66 MHz, and Channel 4 is 66 MHz to 72 MHz, and usually you cannot transmit adjacent channels (they interfere) so you just get one at a time. The converter output is radio-transmission-ready.

There's no great similarity; the video is modulated in vestigial sideband (like AM modulation, but with narrowed bandwidth) and the audio becomes an FM signal at the high end of the bandpass. Sync is the highest AM power, black is slightly lower, and white is minimum. Stereo sound uses a second subcarrier. More NTSC details here There is no way that the composite (a baseband signal) can go out an antenna to any receiver; it just can't contain any channel 3 character.

No, BUT some other-than-television pickup might be managed; it's called Van Eck phreaking. 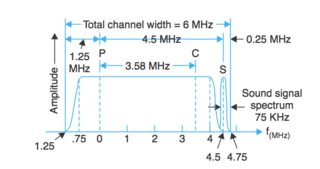 Video and audio were sent separately, but still within the 6MHz channel:

And the TV channel map:

When ATSC replaced NTSC, the 6MHz-wide VHF/UHF channels were reallocated to ATSC digital ones, but like NTSC are still single (vestigial)-sideband and 6MHz. This helped with the conversion process, as over-the-air and cable RF hardware and infrastructure could be reused with the new digital signal. 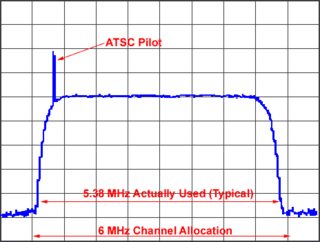 You'll notice from the spectrum that great pains are taken to use the entire 6MHz channel, with no gaps. To do this, ATSC uses a modulation scheme called 8-VSB, sending a digital feed using an MPEG-2 Transport Stream multiplex that carries compressed video, compressed audio and other kinds of data streams. Compression and efficient coding - that's what it takes to get 19.4 Mbit/s down that 6MHz bandwidth so you can watch sportsball in glorious 1920i or 720p 16:9 HD. (It's hard to believe that HDTV has been around for more than 20 years now, but here we are.)

Anyway, you were asking about old-school analog TV. It’s still possible to modulate analog TV onto an RF channel. This was popular with early video games that sent video over channel 3 or 4, and some camcorders had this ability as well. The reason for this is TVs didn’t have A/V inputs until fairly late (mid-80s or so), they only had antenna 'clip-leads' or a cable coax input, both of which required RF.

That said, it’s difficult now to find a recent TV set that can receive analog over-the-air TV, though most still accept composite video.

If you find an old VCR at a yard sale or in grandma’s attic, that device can receive legacy TV and output composite + audio, and also take composite + audio and send it out as RF on channel 3 or 4.

There were also boxes called 'TV extenders' that allowed multiple viewers from the same cable box or VCR. 'TV Rabbit' was an early, popular one.

There were later units that used 2.4GHz, for security, baby monitor and other legacy CCTV uses. Seems like you can still get those: https://www.amazon.com/AV220-3-Extender-Wireless-Transmitter-Receiver/dp/B07HRK2XNH

Analog televisions do not need to be "tuned in" to the composite cable signal.

Huh, you need to select "composite input" on your TV, don't you? That means it sets up its internal receiver chain so that it can deal with the signal.

And it's really what happens. Essentially, selecting the composite input configures your TV to tune to a really low frequency, which it receives through that RCA connector.

So I have a few questions:

The carrier frequency. In fact, in early 1990s lingo, when I started playing around on a TV, the technical term used in the manual was "FBAS" signal (and that's German for Farb-Bild-Austast-Synchron-Signal, Color Video Blanking Synchronization, CVBS in English). And it's identical to what is in picture information on your favourite analgue TV station at their carrier frequency, but at a carrier frequency that's effectively putting the whole signal symmetrically around 0Hz – Baseband.

I understand that the composite cable signal does not have audio, but apart from that, what is different?

Nothing, really. It's more or less PAL, SECAM or NTSC (depending on which analog TV standard your composite video source produces), mixed to baseband.

What frequency is the signal transmitted down the composite cable?

Well, strictly speaking, the carrier would be at 1.25 MHz, I think, with the signal then extending from somewhere above 0 Hz to ~ 5.25 MHz, depending on the video bandwidth.

Would it be possible to transmit at a different frequency down the composite cable, say for example at a frequency range that an analog TV could pick up?

It's already doing that.

Also, no. Composite video cables are a nightmare. They are better (if even) audio cables. The fact that you shove through megahertzes of bandwidth through an RCA connector is already an indication of how terribly designed that whole consumer standard is:

Low cost above literally everything.

And if yes, would it be possible to just have that signal transmit into the air, effectively making the composite cable a transmitting antenna?

Modulator boxes. Was very common before every TV hat a composite input.

Be very careful about transmitting in a band that your analog TV can pick up – that's illegal. These frequencies are either still in use for analog TV or have been repurposed for digital TV or other applications (this depends on your country's legislation), and you are not entitled by law to use that spectrum.

So, yes, modulator + amplifier + antenna = transmitter, but also = hefty fines or jail if someone else also picks up your signal and reports you to your national spectrum authority (FCC, BNetzA, OFCom, …).

Composite video is a baseband signal. The frequency range goes from DC to somewhere around 6MHz. As as baseband signal it is not suitable to be directly transmitted over the air.

The basic video signal is split up into frames and lines by sync pulses. Before the start of each line a reference signal known as the colorburst is transmitted. This is used to synchronise the QAM demodulator.

For radio transmission the video signal was modulated onto a carrier signal of much higher frequency, somewhere in the hundreds of megahertz, to save bandwidth a vestigal side band modulation scheme is used rather than regular amplitude modulation. The audio signals are modulated onto seperate RF carriers.

Not the answer you're looking for? Browse other questions tagged rf tv or ask your own question.

14
Generating PAL tv signal using a PIC
3
What are some economical ways to get a remote analog video feed?
1
How to fix a frequency shifted audio part of an RF signal?
6
Why the audio subcarrier is never transmitted with baseband analogue video signal?
0
Can an AM signal be picked up and decoded via software?
0
How to avoid signal interference between 5 volt analog video signal and 415 volt servomotor and drivers, when working nearby
4
How did the Telstar 525/405-line conversion system from 1962 work?