Transformer, how the primary current is adjusted to be equal to the secondary load (without considering magnetizing current)?

I am happy to always not understand how does a transformer works ... One answer give me 10 questions ... (So I suggest you to not answer to this question, if you do not want to have more questions :D)

Here is the circuit :

So I put the "coupling" factor to 1, in order to have no leakage inductance and I set the value of the inductors very high in order to have a very low magnetizing current. So the primary current is approximately equal to the secondary current. My question is the following : How the primary current can reach an equilibrium to be equal to the secondary load current ? I will not accept answer which tells Pout is equal to ... So Pin is equal to Pout... There is something happenning into the transformer ...

Thank you very much and have a nice day !

It seems to me that you have to be helped to recognize this: - 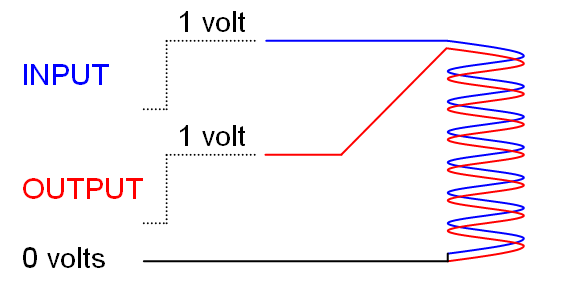 In other words, if you apply 1 volt to the blue winding then 1 volt will appear on the red winding. This happens when the turns on both windings are in-phase and very closely coupled but I haven't given a proper reason why this happens yet.

Consider ONLY the blue winding that has 1 volt applied to it. The current into that winding is the magnetization current and, it ramps upwards governed by: -

Now what would happen if we attached a load resistor of 1 ohm to the secondary winding?

Current (1 amp) would flow into that 1 ohm resistor like so: -

That current (on the face of it) could create an extra magnetic flux in the transformer windings. The extra flux might (possibly) do two things. It might: -

If it caused the output voltage to rise then we would have an unstable situation because, due to that voltage increase, there has to be more current flowing into the 1 ohm resistor and this means more flux and more voltage and this ends in disaster.

If it caused the output voltage to fall then the back emf in the primary would also fall and we would have a situation where the primary took an unholy amount of current.

But, the reality is that neither of the above happens. If either of the above happened we end with contradictions - if the secondary voltage rose driving more current through the 1 ohm load, the primary voltage also has to rise but it can't because, it is limited by the applied 1 volt hence, current has to simultaneously flow back into the 1 volt source on the blue winding whilst also flowing into the secondary load i.e. we have uncontrolled perpetual energy that self-destructs.

The sensible equilibrium is found when we examine the 3rd scenario: -

For a transformer with a non unity turns ratio, the secondary load ampere-turns are equal and opposite with the primary current ampere-turns that flow due to the load.

You have set the inductances very high, which is what you'd expect in a near ideal transformer.

This means that any dI/dt in the total current through the transformer, where total = the signed sum of primary and secondary, ie the difference between primary and secondary currents, will be able to generate a very large voltage, as V=LdI/dt. This voltage is able to dominate the supply voltage and control the current through the primary, such that the difference in currents remains small.

If you reduce the inductances, you'll see that the primary current does not track the secondary so closely.

This is a qualitative argument that there exists a mechanism for balancing the currents, and that the strength of the mechanism is dependent on the inductance in the transformer. It would be interesting to develop it quantitatively.

If you want the easiest quantitative answer, then going via energy balance is more straightforward. If no energy is lost in the transformer, then Pout = Pin. But of course this is non-mechanistic.

Not the answer you're looking for? Browse other questions tagged transformer switch-mode-power-supply or ask your own question.

0
What is impeding current when voltage is stepped up in a transformer?
0
Why does increasing the load on the secondary coil circuit increase the current in the primary coil circuit
1
Transformer Secondary Discontinuity