What potentiometer should I choose?

I want to create a sound amplifier with the LM386 and I need a potentiometer. I don't have a clue what I'm doing (:P) but I've printed out the datasheet (for the LM386) and had a look at it.

So I need a potentiometer, with a knob since I'm going to create a casing for it all :)

Also, I'm planning in stereo, so that's 2x LM386 but I don't want two volume controls. How can I hook that up?

There are many kinds of potentiometers.

As a rule of thumb, for audio, pots generally range from a resistance of about 10K to around 1 megohm. I.e. where a pot is going to be needed, you design that part of the circuit for some higher impedance like that.

Controlling two signals with one control is done with a "dual ganged" potentiometer. This is actually two completely separate potentiometers of the same value which are assembled onto one shaft, so that they turn to the same position at the same time.

Nevertheless, if you're designing the entire circuit (not just replacing a pot in existing equipment), it's best to stick with linear pots. Nonlinear pots tend to be inaccurate, especially the cheaper ones. An approximation of audio response can easily be obtained by choosing the impedances of surrounding parts, in conjunction with a linear pot.

If you drop the audio signal across a 10K pot, and then from the wiper of that pot, you go into a 10K impedance (1:1 ratio), that pot will have a mild dip in its curve, like a mild audio taper. This design violates the rule that a source impedance should be at least 10X smaller than the load, but deliberately so, to obtain this effect. For a deeper audio taper, try a 20K pot facing into a 10K impedance (or any 2:1 ratio). Scroll to the bottom of the answer, where there are some images made with GNUPlot which show the effect on the potentiometer curve of different impedance ratios.

Pots are made from different materials. The common, cheap pots have carbon elements, but even among those, the quality varies. Better, more expensive pots use conductive plastic or "cermet". Carbon pots made by Bourns are rated for a lifetime of 15,000 turns, whereas their conductive plastic and cermet ones are typically specified as 100,000 turns.

Pots have attributes which make a difference when you're assembling your circuit into a chassis. Some pots are designed to be soldered onto circuit boards. They can be panel-mounted, but it is somewhat difficult to solder hookup wires to these: you want pots with solder lugs: flat legs with donuts on the ends into which hookup wire can be inserted. Shaft length can be a nuisance. When you mount a pot you may find that the knob isn't flush with the panel because the shaft is too long, requiring it to be cut to length with a hacksaw. If you order pots online you can select all these attributes, but if you want a pot today, the selection in your local electronic shop may not be that great. The pot in the value you want might have PCB pins only, or a shaft that is too long. Select the knobs together with the pots and fit them together before paying.

The LM386 is a very low quality part in terms of noise and distortion,so I wouldn't spend more than a dollar on a no-name-brand potentiometer. There is little sense in getting a Bourns (carbon or otherwise) to go with the LM386. A non-name carbon unit from the random part bin of your local electronics store, or something pulled from discarded equipment.

Okay, here are some images related to pot impedance. 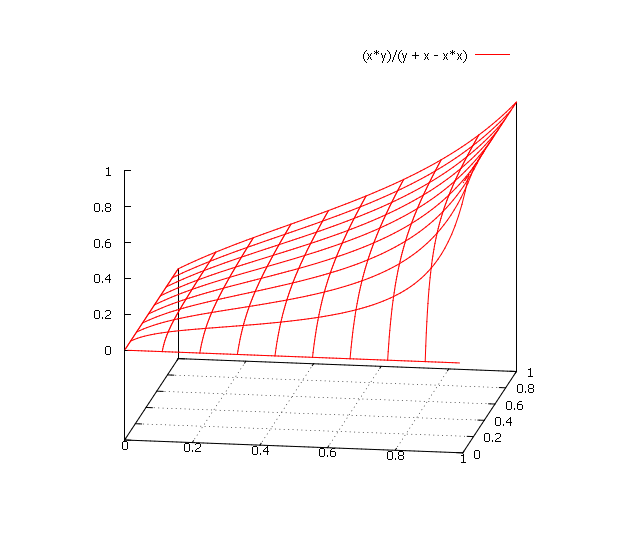 The horizontal axis is the position of the potentiometer wiper, from 0 to 1 (all the way). The input signal is assumed to dropped to ground across the full resistance of the pot, and the output of the pot is taken from the wiper.

The Z axis (receding into the page) shows the load fraction of the impedance that the wiper faces, divided by the impedance of the pot. The first image shows ratios from zero to 1. So it shows what the curve is like for small loads, all the way up to 1:1 (like the 10K pot going into 10K situation). At 1:1, the curve is quite straight already: the dip is very mild.

This second image extends the scale, showing increasing load impedances all the way up to 10X the pot impedance: 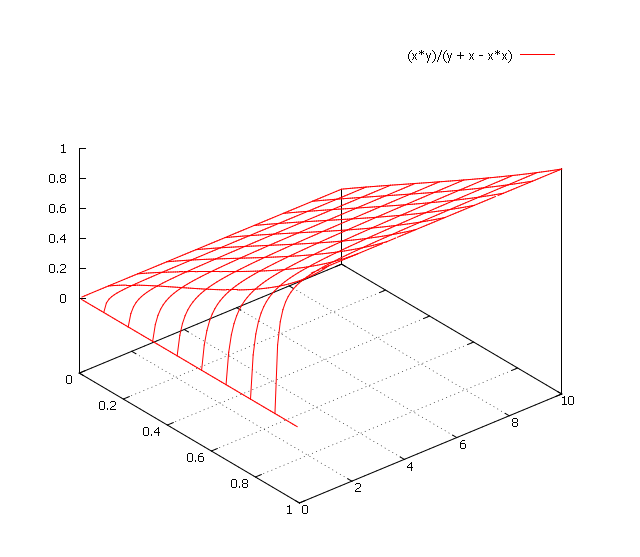 You probably also want a reference circuit to build from ..

Not the answer you're looking for? Browse other questions tagged amplifier control gain lm386 or ask your own question.

2
What type of potentiometer to use?
0
Choosing the value of an audio pot