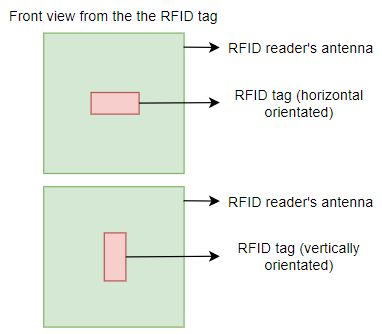 "A circularly polarized field is made up of two orthogonal E-field components of equal amplitude (and 90 degrees out of phase)".

Since the two E-field components are not equal because of the elliptical polarization the E-field strength that reaches the RFID will be different. Therefore, in this case, the vertically orientated RFID tag might only be receiving the minor axis E-field, while the horizontally orientated receives the major axis E-field. Hence the variance in the detection with respect to the orientation of the RFID tag.

With regards to the RFID tag been detected when it is closer. Keep in mind that the intensity of the radiation is inverse to the distance. So the further you move away from the source the weaker the intensity gets and the closer you move towards to the source the stronger the intensity becomes. Also, it could be that as you move closer the minor axis E-field is now above the threshold to detect the RFID tag but as you move further away remember the minor E-field will drop and will always be less than the major axis E-field.

Not the answer you're looking for? Browse other questions tagged rf rfid em or ask your own question.