I'm trying to make a buck converter with this mickey-mouse MC34063A chip that will step-down +5V to +3V3 up to 500 milliamps. I've gone through the calculations by hand and validated them with an online calculator as well. My PCB works great with small loads, but with loads of around 300+ milliamps the voltage starts to taper significantly.

For reference here is the capacitor and inductor that I used:

My scope shows 200mV pk to pk ripple on the output, and the switching waveform on the inductor side looks like pork and beans. 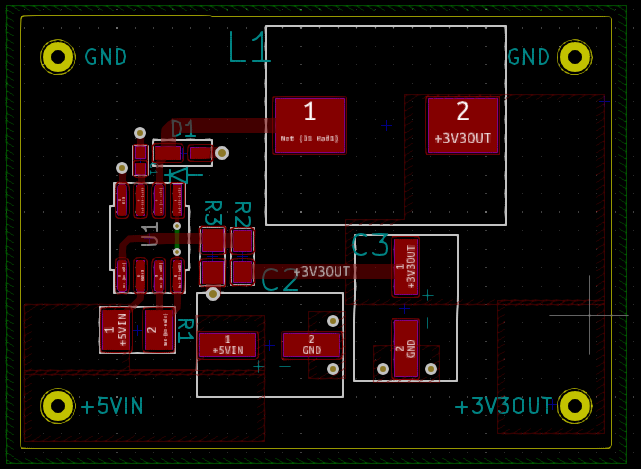 Your inductor is 6 uH ? The datasheet tells us that the max. frequency is 100 kHz and that the peak output current in the switch is 1.5 A.

How does the buck work? During the "on" time, energy is stored in the inductor, and during the subsequent "off" time, that energy is released into the load (powering it while the input is effectively disconnected).

Let's say every cycle, the inductor totally "empties" i.e. its stored energy goes to zero (just before the switch turns on to begin replenishing it). When replenishment begins, one end of the inductor is at the load, at 3.3V. The other end is hard-switched to the +5 rail thru the switch. If your input is only 5V, life will be hard because the switch in 34063 is not one but two diode drops (at least) below the +5V supply. At 0.7V/diode-drop, that means the energy must be supplied to the inductor with only (5-2*0.7-3.3)V across it, which is only 0.3V !

So life is difficult. I would say, based on this, that the 34063 is not a good choice for this particular application due to its low operating frequency and its rather lossy switch transistor. That 0.3V differential across L is a real difficulty, and is likely responsible for the trouble you're seeing at the high end.

But I hope working thru these equations is useful to see how designing SMPS's can be quite an undertaking...

If you are stepping down from 5.0 V to 3.3 V, the converter is operating with a duty cycle of 66%. At 100 kHz, your on-time is 6.6 us. With 6 uH inductor and 500 mA load current, you can expect a peak inductor current of 2.12 A, which is much higher than your load current. I assume here that you are operating in continuous conduction mode. I think for such low load currents you should be using a larger inductor or you should use a different converter with higher switching frequency. You are probably running the converter in current limit and the output voltage is not regulated anymore. You can verify if this is the case by measuring the inductor current. In case you can't do this, you can probe the switching node and check how the duty cycle changes with the load. There should be a slight change with load. If the duty cycle is being reduced agressively with the load current is because you are hitting the current limit.

PS: The inductor value defines the current ripple and therefore the peak current through the switches. The ESR of the inductor generates additional losses. If you don't care much about efficiency, this is not important. Just use one with a ESR of the same order of magnitude of the on resistance of the switches. The current ripple goes through the output capacitor. You should determine its capacitance based on a ripple requirement. The larger the output capacitor the lower is the ripple. Have in mind that the ripple current also goes through the ESR of the output cap. If the ESR is large it might be the main contributor to the ripple magnitude. If you look at the ripple waveform and it looks triangular, then you know the ESR is too large (the triangular shape is the inductor current flowing through the ESR of the output cap). This will also affect the load transient performance of the converter, but I assume it is not a major concern for you.

Not the answer you're looking for? Browse other questions tagged capacitor inductor buck esr mc34063 or ask your own question.