Voltage regulator 'hiccups' when gate pin of MOSFET is touched

I've been struggling with the following circuit which includes a Raspberry Pi: 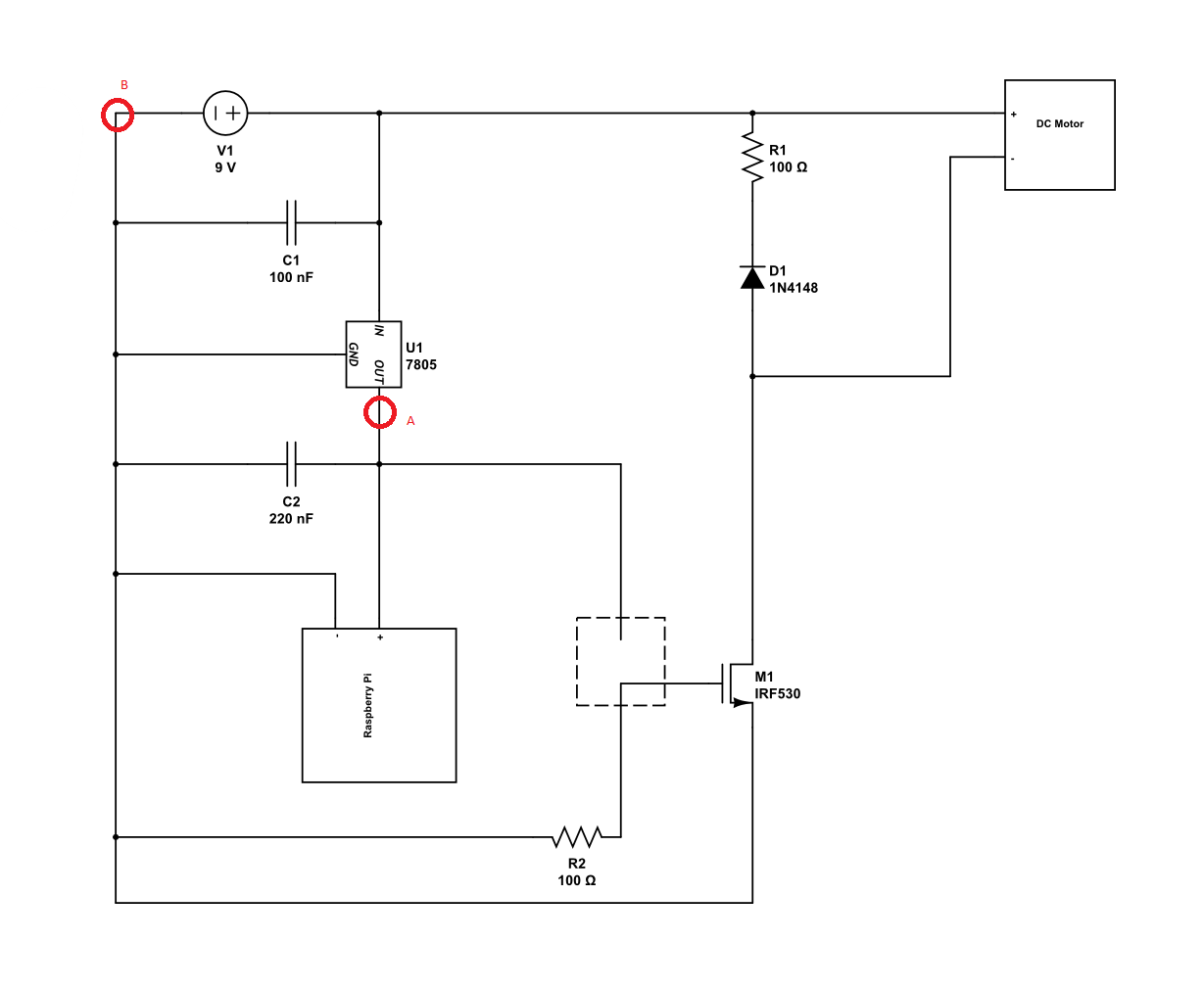 That's a 5V voltage regulator (with protective capacitors), and a DC motor over on the right, and an IRF510 N-channel MOSFET toward the bottom.

The 9V supply is actually a plugged in 9V supply, so battery death isn't an issue.

The problem in some way is stemming from the presence of the Raspberry Pi.

Now, I touch the two wires in the dashed box. This should simply kick the MOSFET over, allowing the motor to run. And it does that. Except there's a small hiccup. The voltage reading (A to B) drops momentarily to about 1.0V, the Raspberry Pi turns off, but then the voltage (A to B) comes back up, the Pi reboots, and the motor is running. I disconnect the wire and the motor stops. Everything is fine.

Replace the raspberry Pi in the picture with a regular resistor and the hiccup doesn't happen.

Now I would say that the most likely cause is some sudden spike in current is happening, overloading the voltage regulator's 1.5A rating. But I can't see what would be causing it. Measuring the current out the regulator when the Pi is idling gives only about 0.35 A. I can't see how touching the other parallel wire there would cause some surge in current.

Furthermore, everything works fine after the hiccup!

So I'd be extremely grateful for any clue as to what might be happening! Thanks for any advice!

Measuring the voltage across the power supply (where it comes INTO my breadboard)'s positive and negative terminal during the touching of the wires ALSO shows a drop from 8.98 V all the way to around 2V and then goes back up. Now I'm even less sure of what's going on!

And just to clarify - this is a AC to 9VDC converter plugged into a wall outlet; the wires go directly into the + and - rails of my breadboard.

Steps to diagnose / eliminate the problem:

If the above does not resolve the issue:

Motors often (always? it's not really my thing) need much larger currents to start up than they need to keep running.

9 V batteries have fairly high internal resistance. Edit I just saw you are saying you aren't using a battery. In this case I'd say your supply probably doesn't have the juice to get the motor started. It could also be an issue with long wires and flaky breadboard connections, but just not enough juice is more likely.

So the motor (not the gate of the FET, which is what I think you were thinking) is drawing a large current to get started. This is pulling the 9 V supply output so low that the regulator goes out of regulation causing all the other symptoms you mentioned.

The simple solution is a higher amperage supply.

If the supply you have is just on the edge of providing enough current, you could try adding a big capacitor, say between the 9 V positive terminal and ground. The value will depend on the motor. The value might be 10 uF, 100 uF, or more. If values in the 100 - 500 uF range don't work, then you may need to consider more drastic circuit changes.

The only thing that isn't clear is why it doesn't happen with the uC removed.You might want to try that test again --- maybe you just didn't see the glitch because with no uC, there's no way to see that the uC is rebooting.

Well, upon further inspection, I looked at my power supply to find that it was rated for 0.3A. Since the Pi draw 0.35 on it's idle time, I can see how this could be a major problem. As soon as I can get another one I'll test again, betting the issue will be resolved.

Not the answer you're looking for? Browse other questions tagged power-supply voltage voltage-regulator raspberry-pi or ask your own question.