Theoretically, I have read and understood that during the initial start-up of a circuit, the circuit will draw high current (known as inrush current), so as to charge the capacitors in its direct line to its input voltage value.

Suppose, I have an inrush current of 2.5A from 0 to 5ms, and then the current decreases to my actual load current of 500mA, how to calculate the peak pulse power dissipation of the resistor during that 5ms.

Decades ago I was tasked with analyzing the power dissipation of switch-cap circuits.

As part of that, I wrote the integrals of energy in the switch and in the capacitor.

Turns out the SWITCH(RESISTOR) energy dissipation is exactly the energy stored in the capacitor.

Thus if you have a large audio amplifier with 100,000 uF capacitors on +50v and -50v rails, the energy stored in each will be

Assume your surge-limited resistor dissipates that energy in 1/120 second.

Yes, it is possible. However, as the complexity of a circuit increases, it becomes harder and harder to estimate it, especially if you are using some current controlling mechanism, whose behavior is not linear. Assume the following simple RC circuit, where the current in the time domain is given by:

At \$t=0\$ you would have you peak current, which equals \$10A\$. Determining such a equation for more complex circuits can be challenging, and the traces inductance also places a role in limiting the peak current. Furthermore, there is a dependence on the supply voltage's slew rate, which can shape the inrush peak current.

I suppose the best way of estimating the in-rush current is by simulating it an considering the biggest capacitances in your circuit. It gives you a good start and you can better adjust the current limit later. 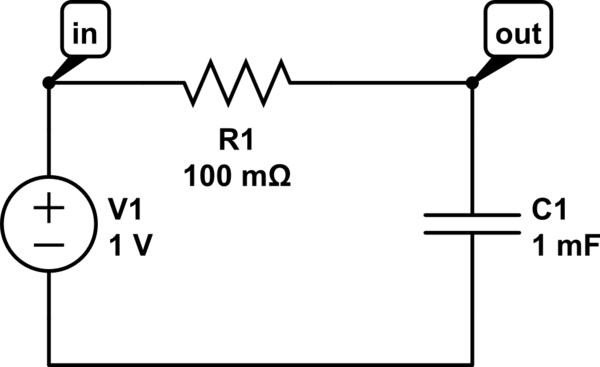 You way of thinking is correct, and the inrush current can be limited using a NTC in series with the supply voltage. Once the system is starting up, the NTC poses a large resistance to the supply, but as it gets warmer, its resistance drops considerably. Basically you limiting the current at start-up and reducing the power loss at steady-state. However, using NTCs has catch, if your device is being switched on/off very often, the NTC cannot cool down, thus, not being as effective as it should be.

You are being a bit conservative with your formula, because it assumes that your peak current lasts 5ms, which is not the case. Usually the in-rush current has a bell shape and for the precise value, you would have to integrate the area below it. That said, your formula should be ok, if you want to be in the safe side.

Here there is an application note by Texas Instrument, where many approaches for limiting the inrush-current are presented.

Not the answer you're looking for? Browse other questions tagged capacitor resistors inrush-current or ask your own question.