Issue: PCB 1 more likely MT3608 not provide enough amps to run LED strips (0.7A max in basic mode) & controller (ESP32 ~200mA) however MT3608 should be able to deliver 2A (I need 1.5A top). If I power up PCB 1 directly via ESP32 usb connector then Windows run audio about disconnecting USB but both devices are running well (also tried powerbank 2A delivery, works, input ESP32).

I think there is issue with MT3608. I disconnected PCB 2 and used computer PSU with 3.3V node. Still not working. When devices freeze I can hear loud noise coming from power inductor. Running just ESP32 without LED part is just fine for ESP32. Plugging in LED connector makes ESP32 crash.

Some parts are not soldered onboard 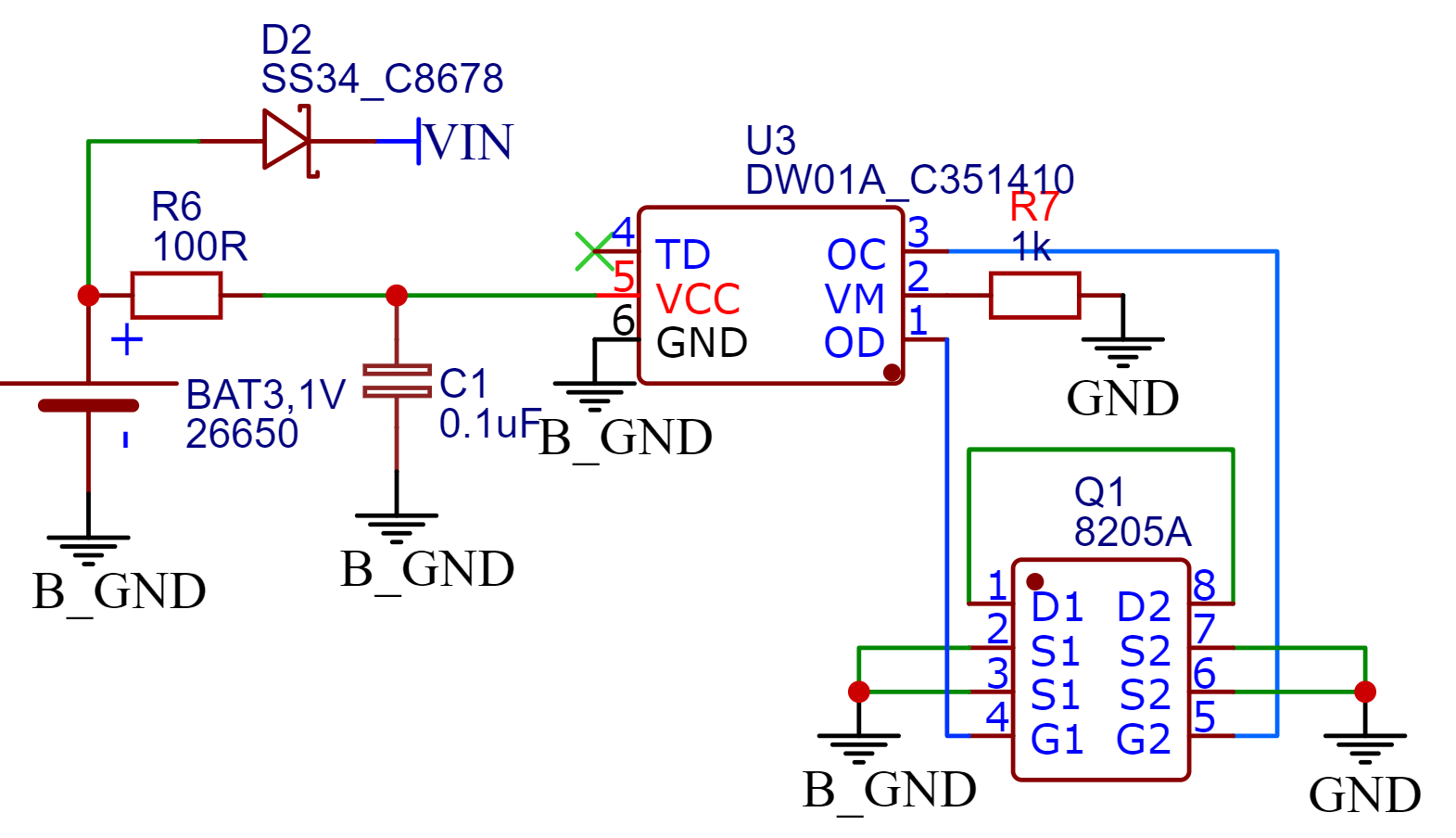 I can post up PCB wiring if you need.

PB => Powerbank PSU had 3.3V There is for sure some voltage drop on PCB 1.

Any idea what to improve? 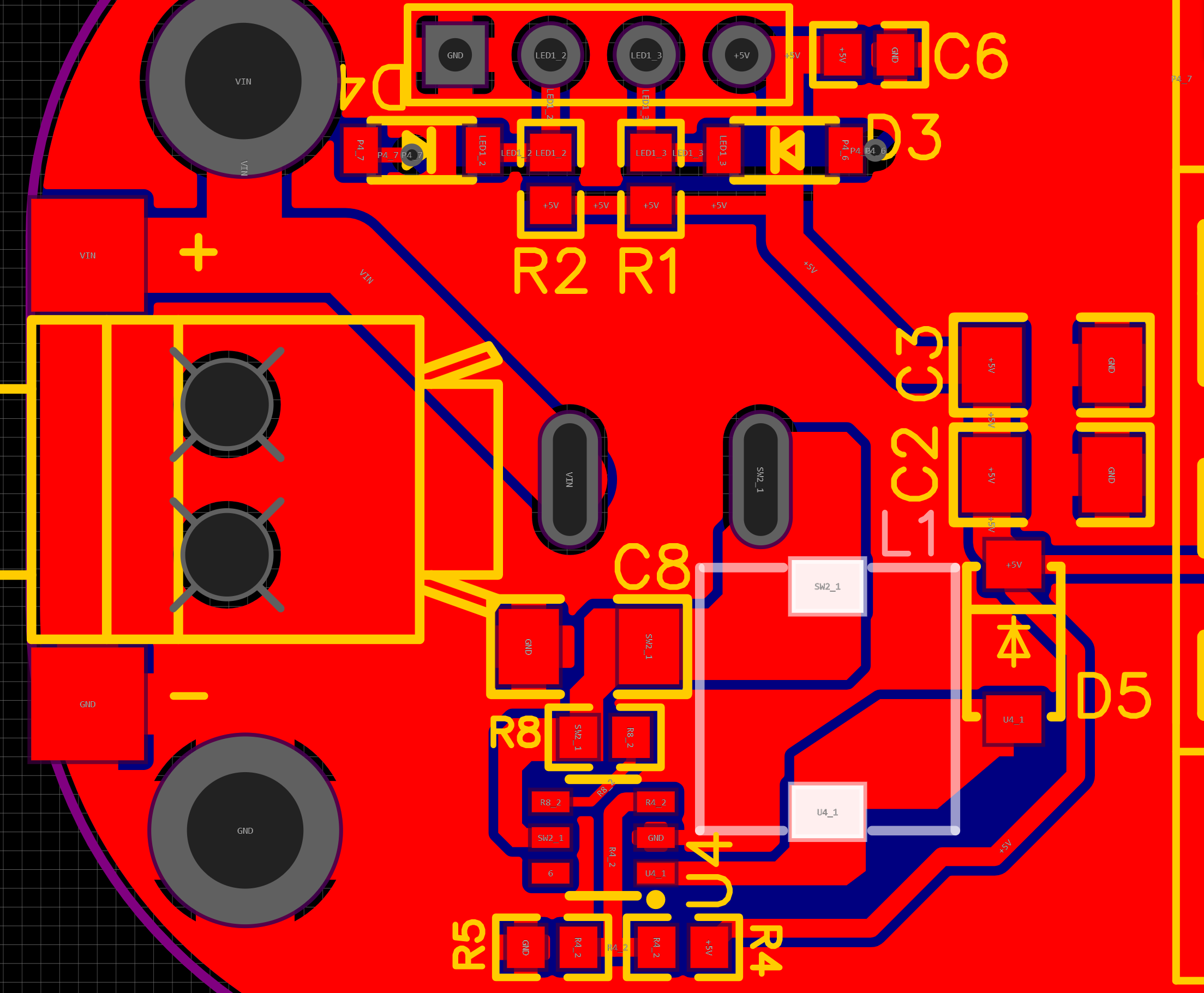 (line on the right goes to VIN ESP32)

Inductor datasheet does not spec saturation current, but it does spec max DC current:

With 0.11 ohms DC resistance, at 1.23A it will dissipate 0.16 Watts. An inductor of this size (7.3mm x 7.3mm) can dissipate a lot more heat than this without overheating, therefore I believe the max DC current is not specified with regards to maximum temperature but with regards to magnetic saturation.

The chip switches inductor current between the cyan and blue paths which are the "hot loop" and that should have a very tight and short layout. If possible blue and cyan paths should be as close as possible to each other.

Also the inductor current path (green) and the path between GND of input caps, output caps and the chip should be as tight as possible.

This layout is pretty bad, I think the ground pour made you think "GND" was connected everywhere but look at the path the current has to take through the ground pour... this will radiate a lot of EMI and it probably won't work at all, considering the high switching frequency. 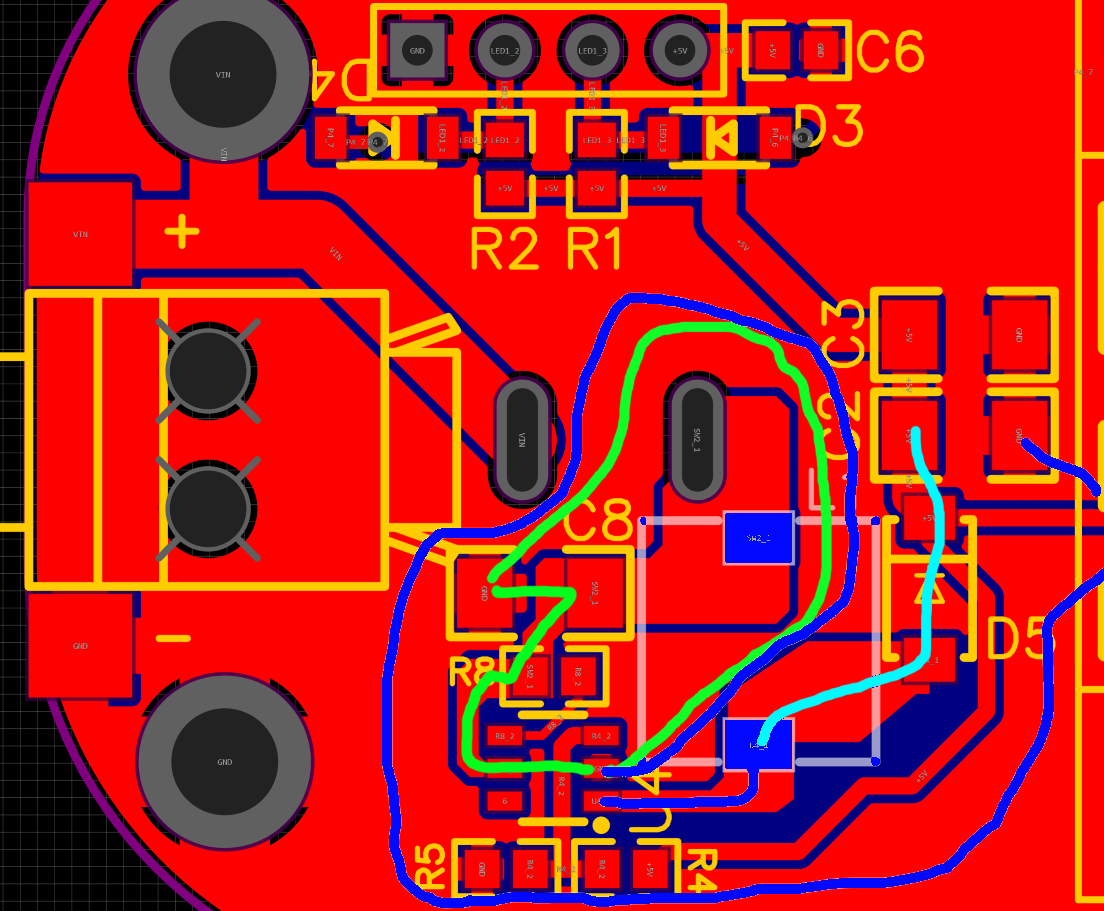 For this kind of layout, you should place the chip, input caps and output caps in such a way that the GND pins of the three components are connected together very close and tight. Then place the diode and inductor.

Highest priority is the hot loop, then inductor and input cap, then the resistors, which are low priority.

If you have a ground plane on the other side it's easier because you can use vias, but if you don't, then you have to make a real good single side layout. At this switching frequency a ground plane is pretty much required...

You can look at layout advice in datasheets of other boost converters in SOT23 packages. Manufacturers like TI or AD usually provide good hints.

Pushing high di/dt current (in this case a >1MHz current square wave) into an inductive path (long winding path) radiates lots of EMI but it will also cause voltage spikes to appear between various points labeled "GND" along the way. This can make your DC-DC chip misbehave, for example if the spikes find their way in the feedback the chip might think the output voltage is wrong and do stuff you don't expect (like shutting down).

You can scratch the soldermask, drill some holes and solder wires through the board to the ground plane on the other side to create vias (green dots on the picture) on the important GND pins. This will make a much shorter and less inductive ground connection. 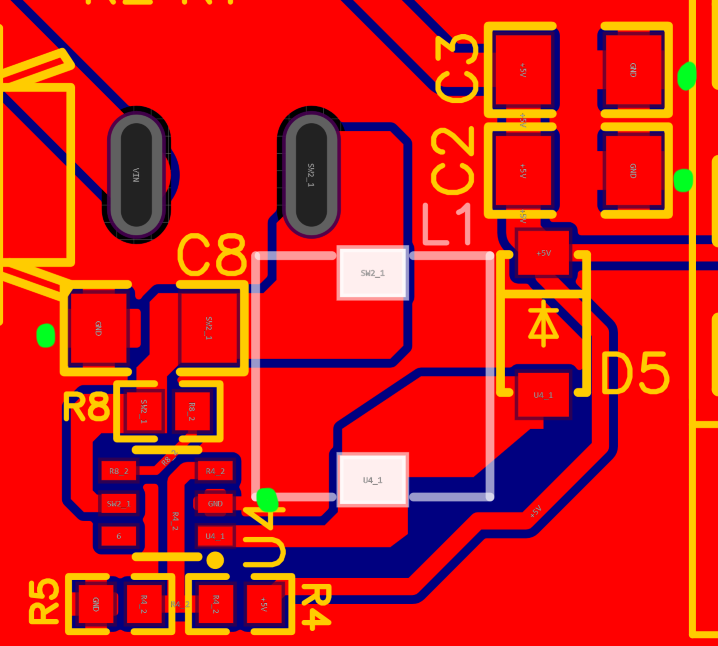 This should fix some but not all EMI problems, and I think it'll probably work if you use a suitable inductor.

If you redo the board you can post a "check my layout" question and ask for advice.

Not the answer you're looking for? Browse other questions tagged pcb-design battery-operated led-strip step-up or ask your own question.