So, I'm trying to control a LED strip with a NodeMCU using N-MOSFETs FQP30N06L, one for each channel. However, the strip is not nearly as bright as with the original IR controller. (I saw the similar question, however my transistors are definitely logic-level)

The main problem SEEMS to be the mosfets, as if I connect the LED strip chanels directly to ground i get a much much brighter light. Also, there seems so be a quiet high pitch sound when using the transistors. 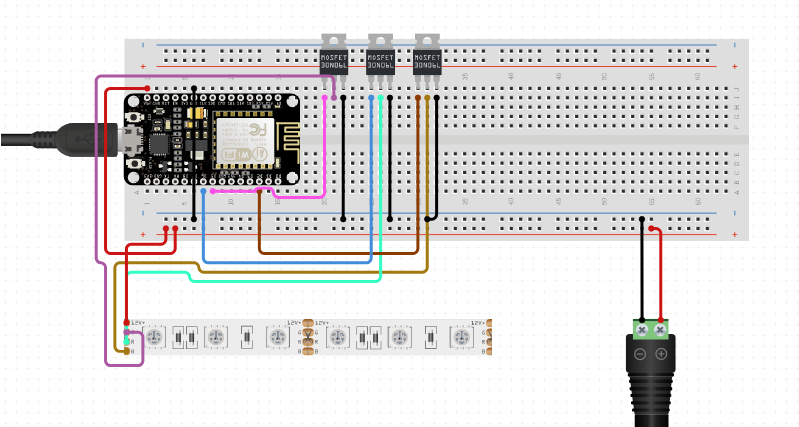 The circuit is very simple, strip (5m, 30 leds/m) runs on 12V and should take 1.5A, so 0.5A for each channel, and that's what the power supplies. Looking at the datasheet for the MOSFETs, it looks like at 3V G_gs is should let through 10A, way more than the 0.5 I require. (However it is my first time looking at a datasheet so that's probably where my mistake is, though I have no clue what). 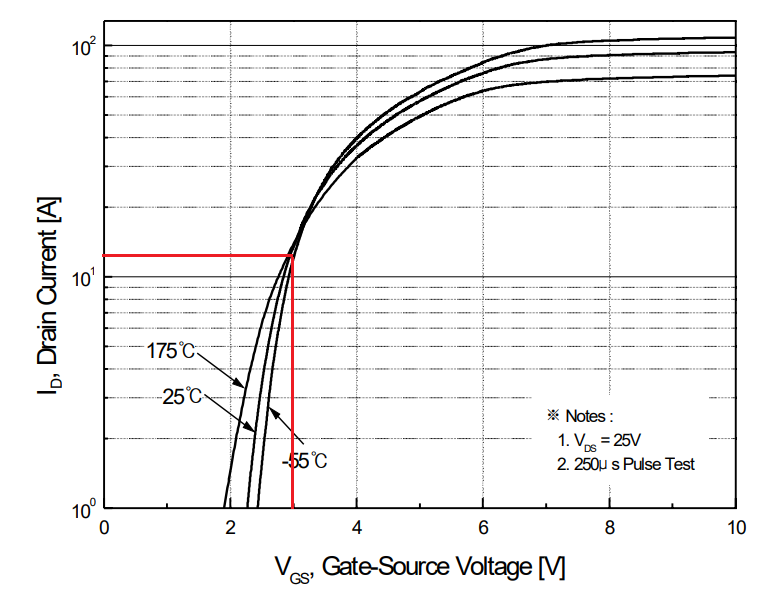 I have a multimeter, just wouldn't know where to even start measuring things.

Also I'm not connecting the MCU to 12V as I know that's too much for the voltage regulator, I just couldn't find a good enough cirtcuit drawing tool, so any suggestion for that is welcome as well.

Fortunately, the graph you want is actually next to the one you used and I have marked red lines on to explain where you problem is: -

So, on the graph on the right (the one you used) I have marked a vertical red line corresponding with a gate source voltage of 3 volts. Now, at the point where the red line hits the traces if you looked across at figure 1 you can see what that means. Note - the current is about 13 amps.

Can you see that the 2nd line I drew (the horizontal red line) crosses a bunch of traces in figure 1? It doesn't cross the lower trace (not quite) and that is the trace when \$V_{GS}\$ is 3 volts - this means that driving it at 3 volts isn't going to deliver the goods (13 amps) typically.

Take the next trace up where \$V_{GS}\$ is 3.5 volts - you can see that my horizontal red line crosses it at a drain source voltage of about 0.7 volts (vertical blue line). This typically means that if you wanted to deliver 13 amps to your load, the MOSFET would drop about 0.7 volts from drain to source.

Given that you only need 0.5 amps I would say this MOSFET would drop significantly less than 0.1 volts across drain and source even when fed with a \$V_{GS}\$ voltage of only 3 volts.

So, my conclusion is that it can't be the MOSFET that's giving you the problem. Maybe it's the interconnecting wires or your power supply isn't able to deliver the current you need. Maybe your MOSFET is "fake"?

However it is my first time looking at a datasheet so that's probably where my mistake is, though I have no clue what

Hopefully this clears up where the problem doesn't appear to be - use fig 1 in future - it delivers what you need to know in this respect.

Based on you mentioning noise, I'm assuming you are using a PWM control scheme of some sort? Are you sure you are driving the devices on 100% duty cycle.

Also if you are switching with PWM, you may need a dedicated mosfet driver, the IO pin on your micro controller is not ideal for driving mosfets with a PWM like frequency. The gate acts like a capacitor that is charged and discharged. Doing this quickly requires more then the 20mA drive of most microcontrollers.

The datasheet says that the gate-source threshold voltage could be as high as 2.5 Volts. Maybe you have a batch that came out at the high end, and your 3-volt gate-source voltage is not quite enough. Do you have a way to temporarily apply a higher voltage to the gate as a test?

Not the answer you're looking for? Browse other questions tagged arduino power led mosfet led-strip or ask your own question.

1
Very hot mosfet when powering an led strip
7
MOSFET choice for 12v LED Strip and 3.3v Logic
0
How much power should 14.4W LED strip consume?
1
RGB LED Strip without microcontroller
1
Mosfet controlled LED-strip is dimmed
3
Will a LED strip be less bright when I drive my mosfets with 3.3V instead of 5V?
2
NPN Transistor To Control LED Strip
1
Use IRF540 MOSFET to control LED strip
0
P30N06 Mosfet Not Working Correctly
2
Big voltage drop across MOSFET with LED strip load