I am trying to make an amplifier with an opamp, using a single supply. I found lots of ressources online. This response was very informative and I tried to simulate this circuit. 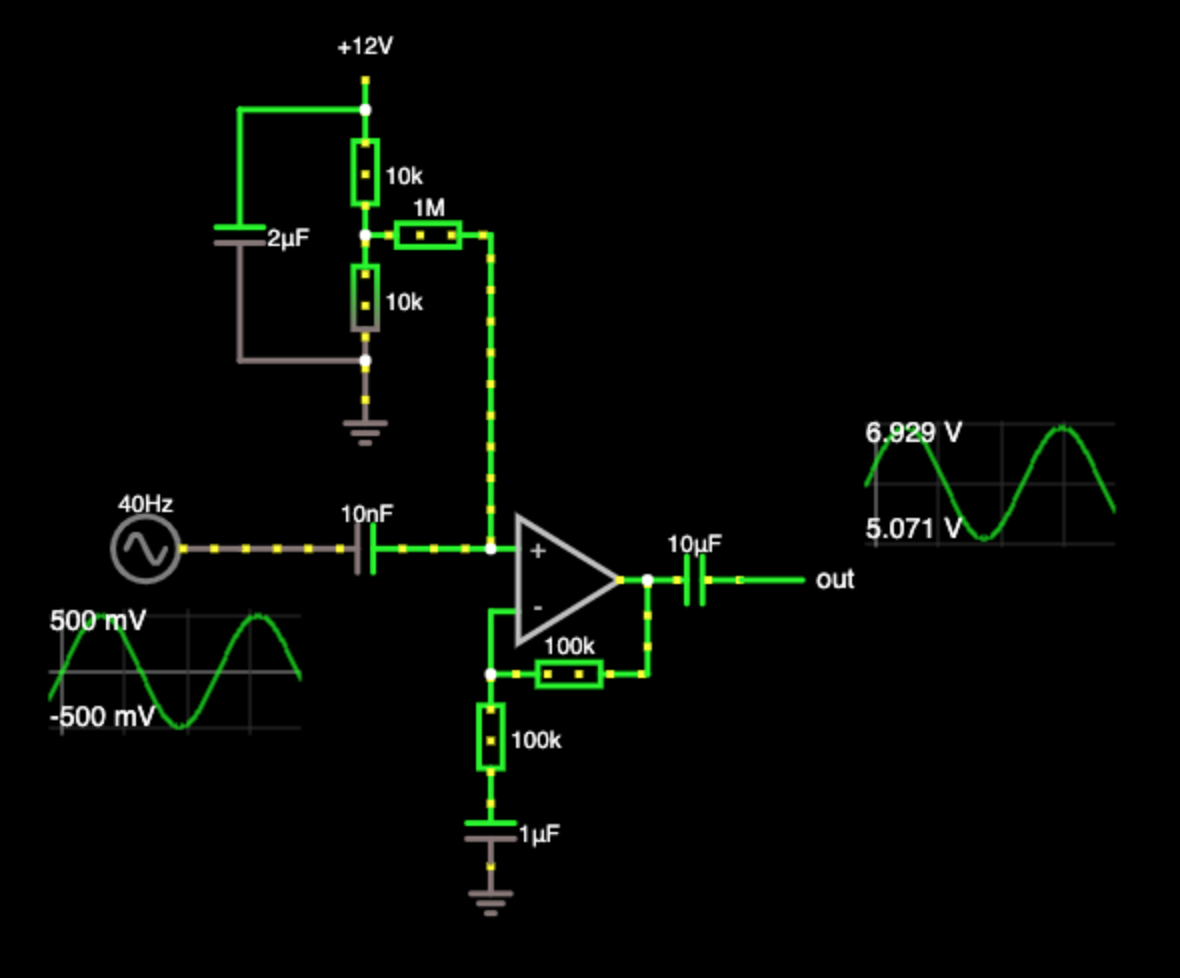 This seems to work, but why isn't the signal AC-coupled?

After trying different things I found out that adding a 1k resistor to the ground after the last capacitor seems to fix it, but I can't really understant why. Is it the right way to do it? Why 1k?

Also, I heard somewhere that rail-to-rail opamps were preferable for these kinds of designs (single supply amp). I only got TL072, would this work? I assume that it would be a problem if I used a very low power supply (like 5V) for my opamp but should be OK with a 12V supply, am I wrong?

After trying different things I found out that adding a 1K resistor to the ground after the last capacitor seems to fix it, but I can't really understant why. Is it the right way to do it ? Why 1K ?

It needn't be 1 kohm. It could just as well be 10 kohm or 100 kohm or 1 Mohm. The 10 uF capacitor and the output resistor form a high pass circuit. This means they let high frequencies through and block low frequencies. At 0 Hz, the DC is fully blocked. The point where the output signal power reduces by half is called the cut off frequency and is defined as: -

I only got TL072, would this work ? I assume that it would be a problem if I used a very low power supply (like 5V) for my opamp but should be OK with a 12V supply, am I wrong ?

Yes, the TL072 would work OK but because the output isn't "rail-to-rail" you will see clipping if your output signal rose above about 8 volts peak-to-peak.

Technically an op amp that normally is powered by dual supply can be used in single supply if input and output signals are small enough and don’t go to rail voltages. That is if you power off 12V and set input and output at 6V where input is 1Vpp and output is 2Vpp then your fine since you’ve got plenty of headroom. In other applications where you’d like to have small power supply and use as single supply to amplify ac signal with ac coupling then you might run into trouble with setup I mentioned. In this case your best option is a single supply rail to rail op amp. Even if you didn’t use lower Olathe for power supply but just wanted more range to output and input the then rail to rail op amp would be ideal anyway. Soothing like opa340 for low power and TLV271 for higher voltages are good single supply rail to rail input and output op amps with ok bandwidth. If you wanted more bandwidth then you can find others on DigiKey. Just look for rail to rail input output op amps.

Reason your signal was not ac coupled at output is because you have no load resistor. Meaning output was connect to very high impedance and almost capacitor like load. When two capacitors are in series with voltage across them, the midpoint will also have DC voltage. To solve this you should place a load like 10kohm.

After trying different things I found out that adding a 1K resistor to the ground after the last capacitor seems to fix it, but I can't really understant why.

It is a well-known situation where OP finds out that some remedy helps but cannot really understand why... The problem is that he/she knows the specific circuit solution but does not really understand the basic (biasing) idea. It can be best introduced in an intuitive way by thinking of coupling capacitors as of "voltage-shifting batteries"... and thinking geometrically like in Raz's answer ("raise", "lift", etc.). Andy's "high-pass-circuit approach" is formal and not suitable for intuitive understanding. It is useful later for the purposes of calculation.

Simply speaking, the input 10 nF capacitor "lifts" the input sin voltage by adding 6 V in series while the output 10 mF capacitor "drops" the op-amp output voltage by subtracting 6 V in series. For this purpose, both capacitors should be initially charged through some relatively low resistive paths to 6 V (like rechargeable batteries). The input capacitor charges through the input voltage source; so the latter should be "galvanic" (low DC resistive). The output capacitor charges through the low-resistive DC load that; so, first at all, the load should be connected.

It would be interesting to draw current paths during the three typical cases - zero, positive and negative input voltage. I have done it for the classic transistor AC amplifying stage in my answer below (the idea is the same): 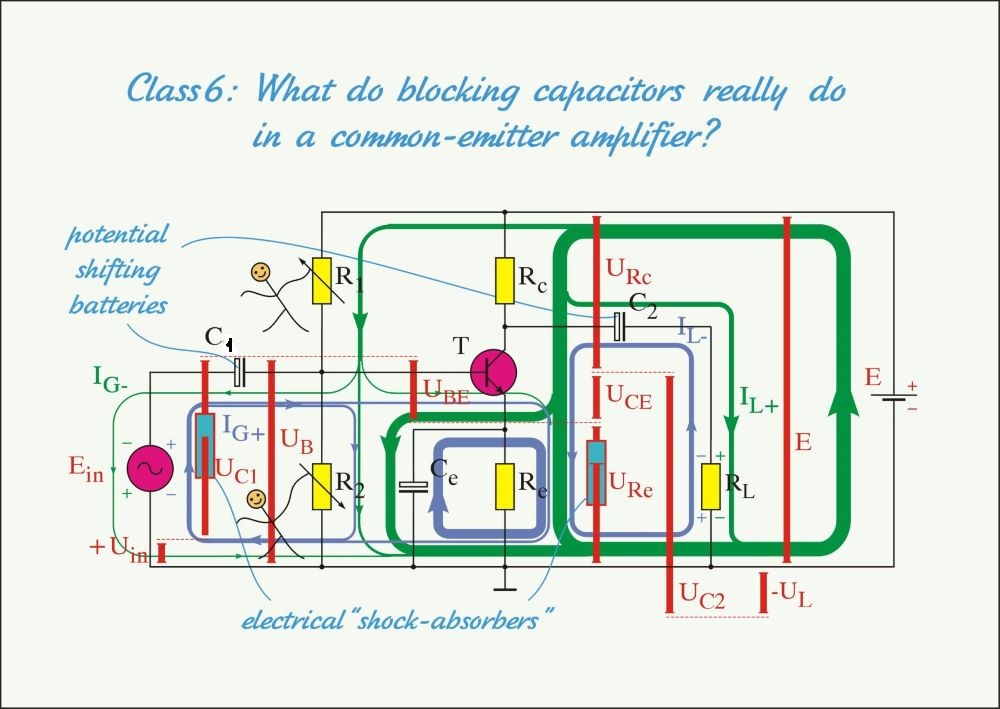 The voltage that is read is only temperary unless the cap is leaky of course, because 10 uF against the 10 to 100 megohm input resistance of the measuring instrument will require time to bleed the 6 volts on the output cap to ground potential.

In an opamp that is working with two supplies, there is ground which is at 0V, so you have say +6V, Ground and then -6V. When you change the energy supply for a positive voltage only method you need to raise the negative supply voltage, that is you are rasing - 6V by +6V so you get 0V, and you raise the positive +6V supply by +6V so the positive supply becomes +12V, right? Well, you also need to raise everything else by +6V. You already have started doing this with that bias supply at 1/2V+ but you are forgetting to raise all the other nodes that were previously at 0V as well. You need to feed from the 1/2V+ divider everything that would be at 0V using dual supplies, you need to to lift EVERYTHING by +6V, remember? A good way of doing this would be by to feed each node with a large value resistor tapped from the 1/2V+ divider, and then add de-coupling caps where necessary.

Not the answer you're looking for? Browse other questions tagged operational-amplifier capacitor amplifier audio non-inverting or ask your own question.

21
Single supply op-amp audio amplifier
1
If you were to add "DC offset" with a clamp, can you easily remove it afterwards?