Am I on the right path to solve this RLC-Circuit? (Need to find the voltage at the resistor)

I'm currently taking Physics II and I'm tasked to solve for the voltage $$U_R(t)$$ in this circuit. 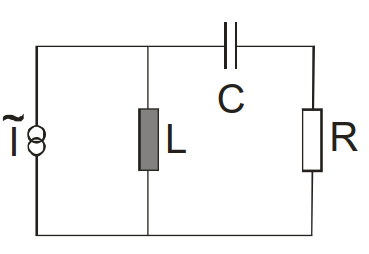 It's driven by a current source $$I(t) = I_0*e^{i*\omega*t}$$ and I can neglect the switch on process. I'm currently at the point of having the differential equation to solve this problem but I'm not entirely sure on how to solve it yet.

I wanted to ask if my thought process was correct so far and if I landed at the correct differential equation or am I on the completely wrong path? 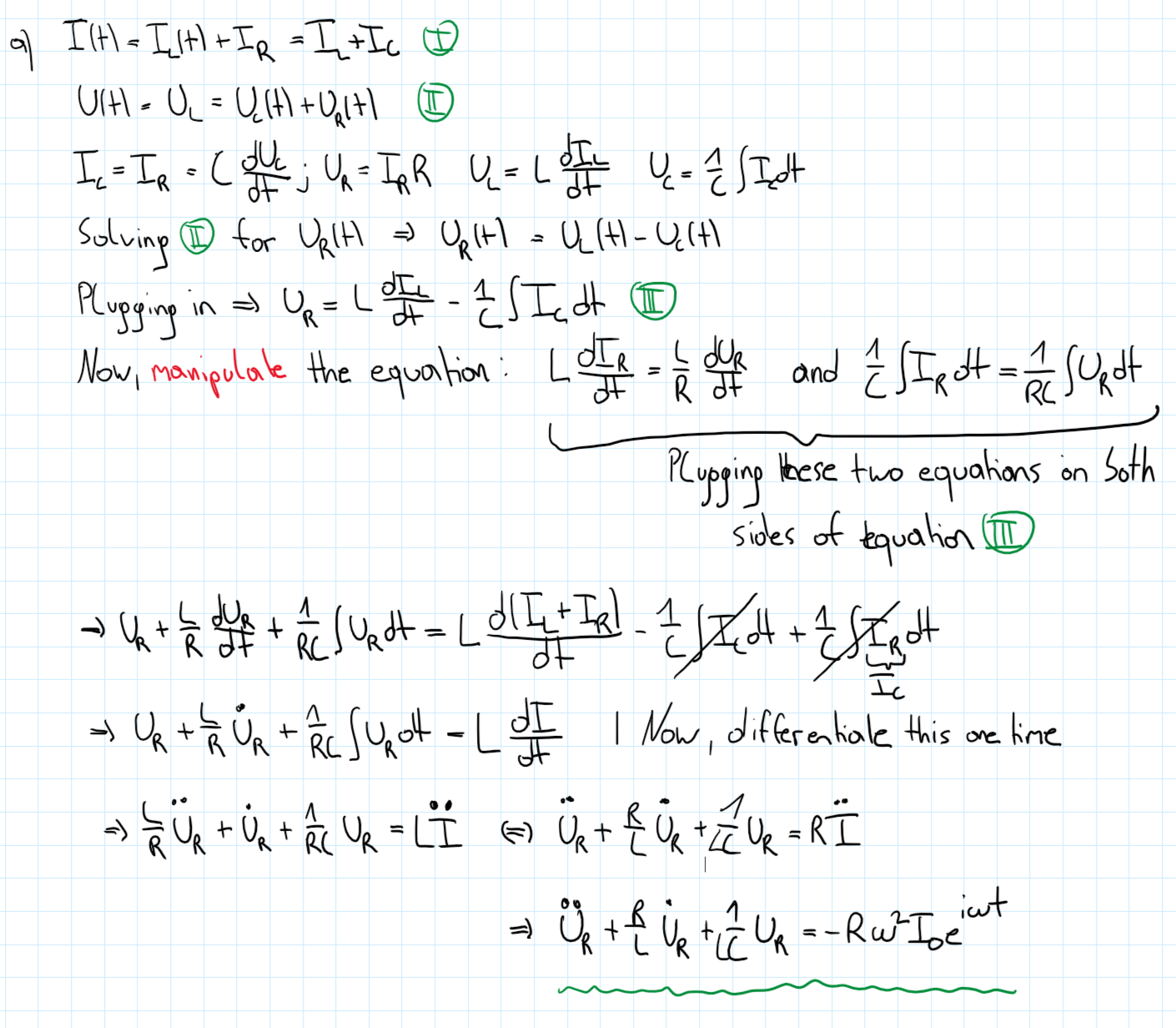 Yes, your analysis is correct.

It would have been quicker to solve for the resistor current and then multiply through by \$\small R\$ to get the resistor voltage, \$v_R\$, as below (I've used \$\small j=\sqrt{-1}\$ to avoid confusion with current, \$i)\$.

As you could figure out, your source is expressed as a phasor, hence we can assume safely the solution can be expressed with phasors and impedances, in consistency with the requirement of ignoring transients.

Which is equivalent to your solution.

Note that this is not the canonical series or parallel RLC, hence the maximum is not the simplest case, and we need to take the derivative of the absolute complex value.

And also note. From this expression, the maximum happens only when \$2L>R^2C\$. If this do not happens, you only have the asymptotic value as limit.

If you aren't familiar with Laplace, getting familiar with exactly why Laplace helps with differential equations is worth some of your time. Find some good book that covers it in a very simple, introductory way (or a video that does the same.) It's actually quite wonderful to see in action. And once you get it using a few of the simpler examples, you can just "accept" that the more difficult cases also work and just use a table from then on. It's like integration, that way. Some integration takes a lot of intuition and imagination to work out on your own -- or, you can just look it up in a table or book, as someone else did the hard work for you. Laplace is kind of like that.

Laplace also relies a lot on partial fraction decomposition. (This is just breaking down a ratio where the denominator includes multiple factors into a sum of fractions which include simpler denominators -- if you don't mind a sloppy way of saying it.) It makes looking up the solution easier, because now you can do it in smaller pieces that are easier to look up. So you'll also want some skills there, too, if you do much with Laplace.

Laplace is more commonly applied solving complex differential equations and, occasionally, convolution. But it does really make things simpler. So it's worth the trouble to at least get a feel for it.

A reason why Laplace is so important in electronics is that capacitors and inductors are ideally represented as differential or integral equations and this makes Laplace stand out as a likely handy approach. And since those components abound in electronics, using Laplace is an obvious fit.

(Sidebar: That's not the only place where Laplace is widely used, as most physical systems involve differentials requiring solutions with exponential relationships. There is a deep relationship between exponentials and sampling, which is exactly what happens when a particle collision occurs. So it abounds in natural/physical systems, as \$d\,x=x\cdot \text{d}\ln x\$. But that's for another time.)

For now, this may just look like some magic-wand-waving... and it is, kind of. But it actually works, too. There are good reasons for it and this is why I want you to really go and study Laplace. It may seem a little daunting, at first, but the "trick" is really, really powerful. So it's worth the time to gain some comfort with the ideas.

Now, in electronics usage, \$s=\sigma+j\,\omega\$. As you probably already know, multiplication in the complex domain involves both rotation and scaling. Usually, timeless polar coordinates here are represented as \$e^s\$ and you introduce time by simply multiplying the exponent by \$t\$ to get \$e^{s\,t}\$. If \$\sigma=0\$ then the factor is \$1\$ and there's no spiral scaling (less than 0 would be spiraling inward and greater than 0 would be spiraling outward, over time, as rotation over time takes place due to \$\omega\$.) So if you are only interested in the frequency response, you set \$\sigma=0\$ and move forward with \$s=j\,\omega\$ (as Brethlosze did.) For systems with \$\sigma<0\$ you can expect them to diminish over time. For systems with \$\sigma>0\$ you can expect them to increase over time (which usually in electronics isn't a good thing as eventually the system must exceed its limits.)

So, keeping in mind how Laplace can simplify otherwise complicated-looking differential equations into simpler-looking algebraic ones, let's now see how this may apply to help out in your case.

In your case, the current divides along two branches; one branch is through just an inductor and the other branch is through a series pair made up of a resistor and a capacitor. The simple approach that Brethlosze chose to take is one often used by folks familiar electronics. But let me clean it up a little bit.

I just wanted to hammer home a few more thoughts about Laplace and why it is handy. You can do all of the hard work, staying in the time domain. But it's often easier to switch over to the Laplace (s) domain and treat things a little more simply before working backward into the time domain, again.

Not the answer you're looking for? Browse other questions tagged capacitor circuit-analysis inductor passive-networks homework or ask your own question.

0
Find the differential equation for Vo (RLC circuit)
4
How to solve this diode resistor circuit?
0
Solving an rlc circuit
0
Two-tap voltage divider, why can't I solve for the center resistor?
0
What is the correct way to solve this DC RLC circuit?
0
RC Discharge (Natural Response) Currents
1
How do I reason about the power output through element A in this circuit?