Why the Inrush current increase with decreasing voltage?

Here are the voltage and current shown for the primary winding of a transformer or an ideal inductor when the voltage is sinusodial.

And the current decreases during the negative voltage cycles only.

What is the the reason behind all this ? 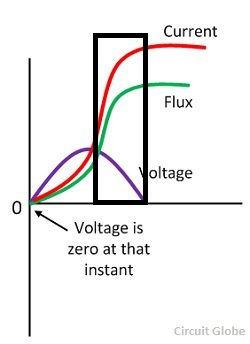 Here are the voltage and current shown for the primary winding of a transformer or an ideal inductor when the voltage is sinusodial.

And the current decreases during the negative voltage cycles only.

What is the the reason behind all this ?

Because it's only in the negative half cycle that the time integral of the voltage decreases.

Your credit card debt is the time integral of the rate at which you buy stuff online. If you keep buying stuff, your debt will keep increasing. It doesn't matter whether the rate at which you buy stuff is increasing, or decreasing (hey, I bought less stuff than last week!). As long as the rate is positive, like the voltage is positive, the debt or the inductor current will keep increasing. To get the debt or the current to decrease, the spend rate or the voltage must actually go negative, so sell some stuff and pay off some debt.

With the voltage now at 0 volts, there is no area under the voltage waveform and hence, there is no need for the current to increase or decrease with time i.e. it remains at a constant value.

No, that's not how it works.

You have an object that can travel only forwards or backwards.

Not the answer you're looking for? Browse other questions tagged ac inductor inrush-current or ask your own question.

0
Why does the multimeter need to be set to AC voltage to measure the voltage on secondary winding when driven by a square wave on the primary?
1
Turning an inductor into transformer and leaving the secondary open
1
Inductor Inrush Current Rating
0
What should be the sign of the voltage across the inductors while doing circuit analysis?
4
Question about ideal transformers and inductors
1
Is Inductor peak current same as the Inductor Inrush current
1
In Buck Converter, when the ESR and EPR of Inductor increases then what is the its effect on output voltages and why?
0
RL circuit and pure inductor
2
Current waveform in an inductor with AC source