1)Short circuit all the batteries.

2)In case of many resistors, the product of equivalent resistance across the capacitor and the capacitance of the capacitor will give the time constant of the circuit.

I have given a lot of thought on this but I am not able to figure out why that method works. Can someone please help? Can't this method be somehow extended to the general case containing any number of capacitors and resistors?

I have given a lot of thought on this but I am not able to figure out why that method works.

This is an application of the Thevenin theorem.

Step 2 is very straightforward. You're treating everything except the capacitor as a one-port network, and the capacitor as the load. Then you're following the usual method of finding the Thevenin resistance of the source network.

Step 3 is a bit less obvious, but you're actually doing the same thing. You treat everything except the resistor as a one-port source, zero the load, and find the equivalent impedance of the source.

If you're familiar with Laplace analysis, you know that capacitors can be treated as a kind of complex-valued resistor, aka an impedance or reactance (in this case, where the impedance will be purely imaginary). Understanding the Laplace analysis makes it much more clear why the two scenarios (several resistors and one capacitor or several capacitors and one resistor) can be treated in very similar ways.

Can't this method be somehow extended to the general case containing any number of capacitors and resistors?

In this case, you can pick out one capacitor and find a Thevenin equivalent source for the network driving it.

But the behavior won't necessarily be equivalent to a single resistor in series with this capacitor, allowing you to characterize the circuit with a single time constant.

This is a direct implementation of the fast analytical circuits techniques or FACTs. To determine the natural time constants of a linear or small-signal circuit, whether it is passive or active, you do not need the stimulus so you turn it off: turn a voltage source off and replace by a short circuit while a 0-A current source is replaced by an open-circuit. Then, temporarily remove the capacitor (or the inductor) and "look" through the component's connecting terminals the resitance \$R\$ that you "see". Sometimes the resistance expression is determined by inspection (you find it your head), sometimes you need to install a test generator and go for KVL and KCL analysis. Let's see a few examples: 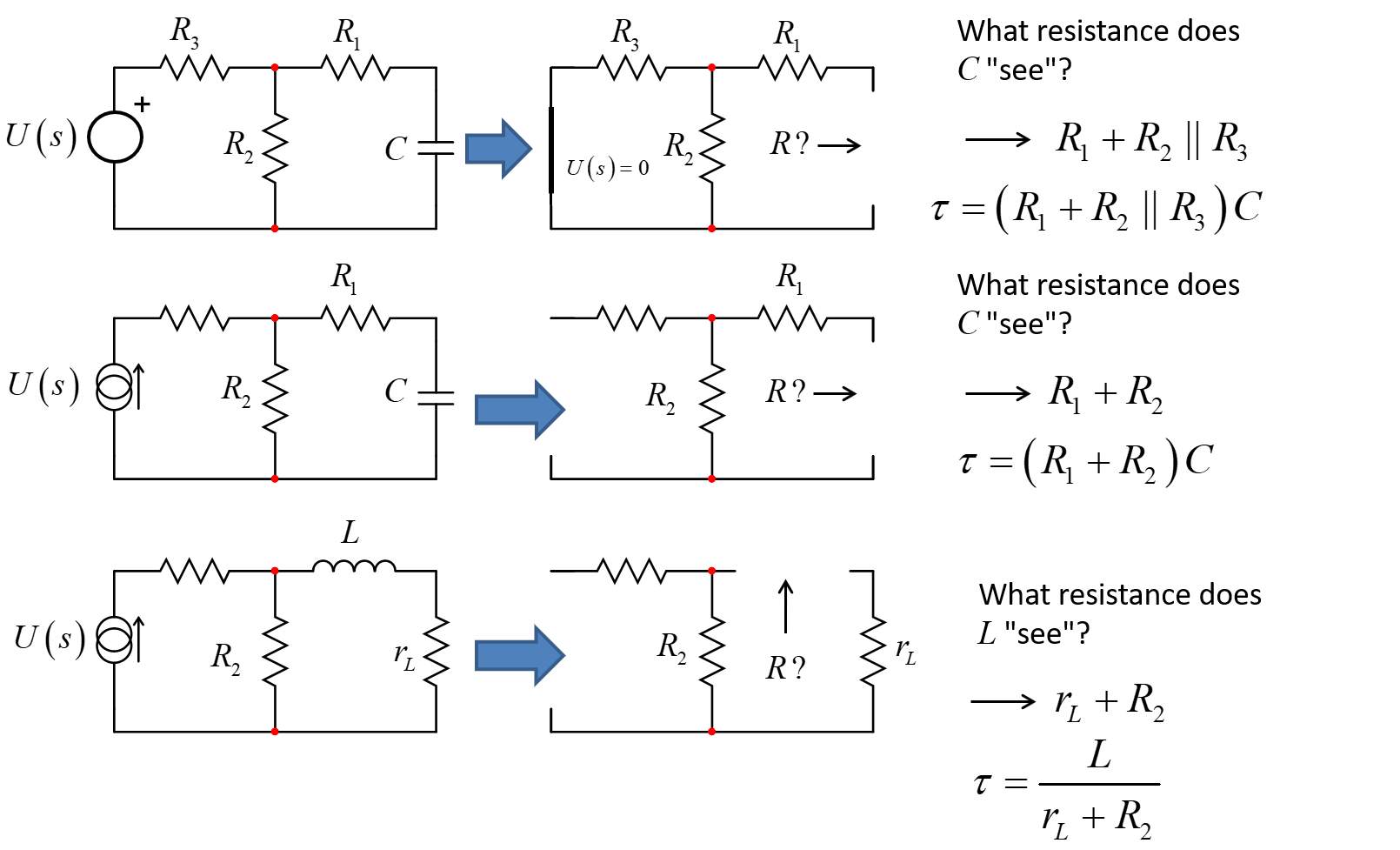 For all of these 1st-order circuits, the pole is the inverse of the natural time constant: \$\omega_p=\frac{1}{\tau}\$ so by inspection you already "see" the pole value and can write the denominator of the transfer function: \$D(s)=1+\frac{1}{\omega_p}\$.

If you have more capacitors and inductors, the circuit order increases and so does the number of individual time constants \$\tau_1\$, \$\tau_2\$ etc. and you'll have to combine them to determine the transfer function you want and a methodology exists for that purpose. Have a look at the seminar I taught at APEC in 2016, it is an introduction on the fast analytical circuits techniques heavily relying on time constants determination.

Not the answer you're looking for? Browse other questions tagged capacitor resistors or ask your own question.