My view on life, in any field, is not to produce more but to consume less. Everybody told me this is a very eccentric weird mentality. Perhaps they are right. Nevertheless I have to build my project to make a highly efficient, extremely low drain, motion triggered 12V battery powered dimmable COB LED light for a room. That’s a mouthful I know. Sorry. I have STPD and paranoid fear of not being understood. My battery is charged by a solar panel. But that’s not important for now. I don’t want to use switches, potentiometers or relays. Let’s eliminate those from the start in any design. I also want to consume minimal power. When I enter the room I want the light to automatically turn on. When I leave the room, after 1-2 seconds the light turns off by itself. I don’t want any switches or potentiometers, If light too bright or too dim, I want a touch sensitive surface in rare occasions to control the dimming. The entire assembly will be mounted in a box on the ceiling of the room (except the battery of course).

In my mind there’s this logic diagram with 4 basic minimal components:

I don’t want to ditch the FC-106 module to design a different PWM block dimmer controlled by a potentiometer as a normal individual would think of doing. I’m not normal. I have issues. I have an allergy to potentiometers. They are prone to failure after a few years due to dust, moisture, grease or other mechanical failures. I want something that is maintenance free and lasts thousands of years. I’m crazy, I know. We live in the 21 century. Let’s keep up the pace and use touch sensors instead of switches. Call me a germophobe weirdo if you want. I don’t care. 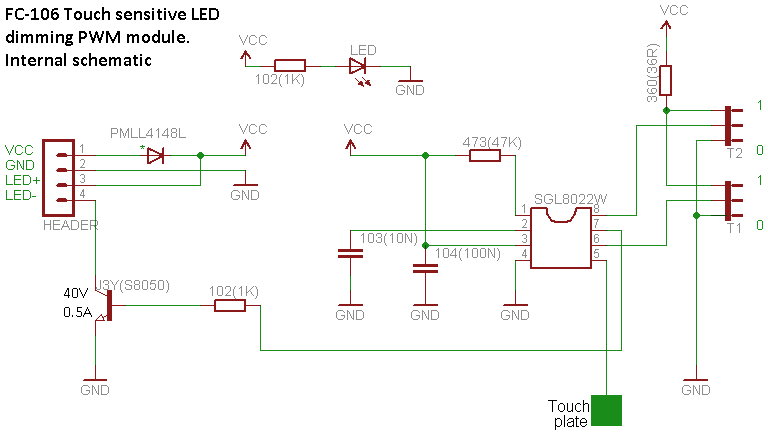 The dimming of the 12V COB LED works flawlessly. Why it’s sold as “undimmable” is way beyond my comprehension. The maximum current I was able to measure was 0.8A at 12.9V meaning 10.32W. Math checks out. The onboard S8050 Y3J transistor gets warm but didn’t got upset since the SGL8022W when first powered automatically starts from half level light and not full power. That transistor is the least of my problems with this project. The problem I’m facing is interfacing the PIR sensor with the dimmer. I’ve managed to solve half of the problem by sandwiching the touch sensor module between 2 capacitor plates and a thin dielectric film not seen in the attached picture. Applying at least 1.5V on this makeshift plate capacitor seem to trigger the SGL8022W chip. (I took care of not touching the wires going to my makeshift plates)

This only solve half of the problem because I still need some sort of “buffer” between the PIR sensor and the dimmer. They don’t speak the same language, so I need a “translator”. Excuse my weird terminology. English is my 2nd language.

Somehow interfacing directly to the touch capacitive sensitive pin 5 of the SGL8022W IC ideea did cross my mind but I have to keep in mind that I don’t want to discard the touch sensitive area of FC-106 module, because I still want to occasionally manually control the dimming. And besides the signals are not compatible (see picture of signals required). According to SGL8022W IC datasheet a short pulse less than 550ms is required to turn on/off the light. More than that will dim the light. Thus the interface circuit will have to put out a pulse with the width less than 550ms (RC time constant).

I’m thinking along the sides of a both rising & falling edge retriggerable one-shot. I’m ok with building complex circuits, however, since there might be an easier alternative, I have to explore it. I sense there’s a simpler solution for my project, which is why I’m posting on this forum. I know I’m missing something.

Thus I was thinking, why can’t I use this type of circuit to act as my interface between PIR sensor and touch dimmer? 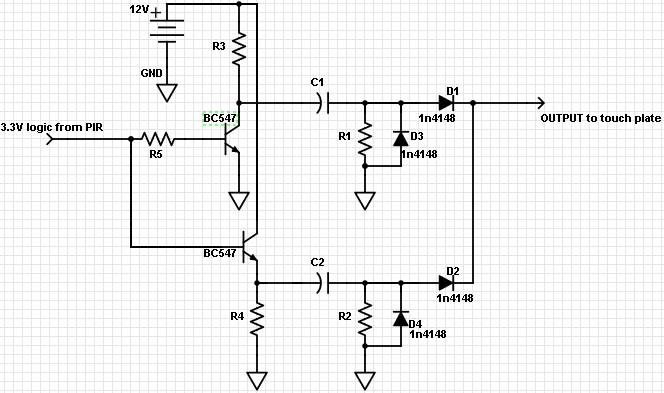 I need some help. It took me 6 hours just to compose, write, draw and raise this question on this forum. Please show me the courtesy for all my work and reply more than a few words, a sentence or a question. Thank you.

TL;DR: Interface a 3.3V TTL logic signal, to a touch sensitive capacitive pin, by doing a signal conversion of the input raising and falling edges into short 200ms pulses.

Capacitive touch sensors react to change in capacitance. Pins 1 and 2 , (OSC and VC) on your SGL8022W chip are the ones which define the capacitance change range.

To emulate a touch I would guess you could try following things:

Now the key is in the word momentary, as you described a pulse of 550ms or less will trigger the "switch".

This you could implement with a 555 Timer circuit configured as a monostable timer where you can define the pulse length.

Place a capacitor or resistor in series with a transistor and in parallel with the pin to influence and activating the transistor will allow current to flow through this "momentarily" added circuit to simulate a touch.

Exact values and so on I cannot give you because I do not have the chips or circuit you have , so it will require some measurements and trial and error from you part to see what works.

Not the answer you're looking for? Browse other questions tagged led battery-operated dimming lighting motion or ask your own question.