Deriving the Impedance equation of a RLC circuit (with 2 Inductor)

During this lockdown I had some time in hand and decided to learn more about impedance. So I gave myself a project, trying to create a impedance graph in excel base on a the schematic seen above. The passive components will be a variable.

To do that, I first need to derive the impedance equation for the schematic seen above. When I cross check it with a simulation tool and a proven graph, I could not get the graph to match. Hence, I believe I must have done something wrong. I had doubled, tripled checked and corrected all the mistakes.

I do not know where I went wrong. I am hoping if I can get a 2nd or 3rd eye to look to see where I might have gone wrong.

This is my first post here, I had done the search but to no avail of information I can obtain anymore. Do let me know if I did violate any rules by posting this.

Edit: I have removed my derivation, as it is wrong and not working. This is to not confuse other readers as User Verbal Kint has provided a really good solution.

There are several ways to look at this type of 3rd-order transfer function: brute-force analysis - which often leads to algebraic paralysis - and the fast analytical techniques or FACTs.

The brute-force expression is not that complicated to write but good luck to develop it and express the result as a meaningful transfer function. Fortunately, it is easy to plot it with a mathematical solver like Mathcad: 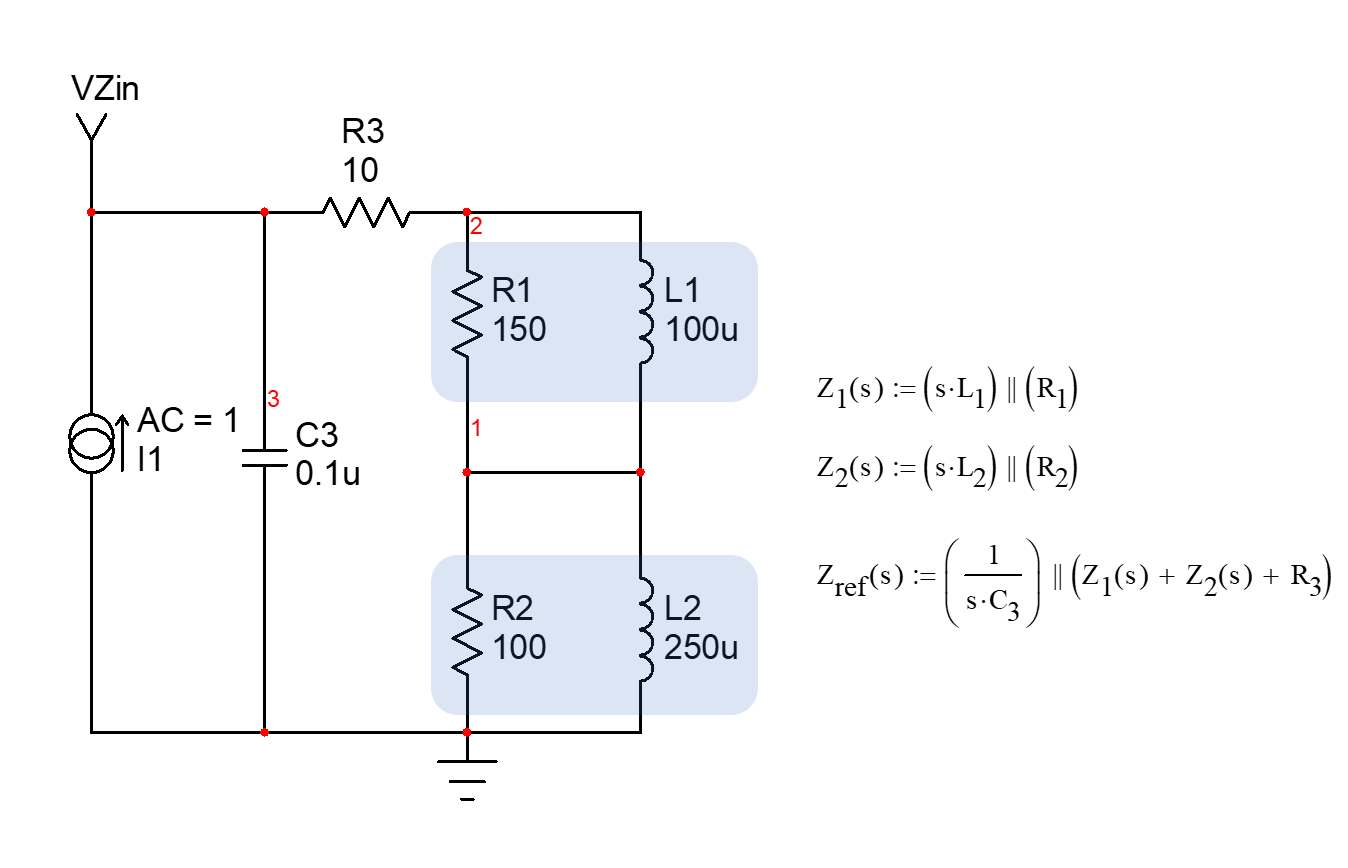 With the FACTs (or any other approach), you determine this transfer function (yes, an impedance is a transfer function) by installing a test generator \$I_T\$ - the stimulus - across the connecting terminals and determine the response \$V_T\$ that it generates. To determine the denominator, you turn the excitation off (the current source is zeroed or open-circuited) and you "look" through the connecting terminals of the 3 energy-storing elements to determine the resistance \$R\$ that drives them. They are temporarily removed during this exercise. This is to write the denominator \$D(s)=1+sb_1+s^2b_2+s^3b_3\$.

For the zeroes, you null the response across the current source \$I_T\$ meaning that you replace it by a short circuit (this is a degenerate case). Again, you "look" through the connecting terminals of the 3 energy-storing elements to determine the resistance \$R\$ that drives them. This is to write the numerator \$N(s)=1+sb_1+s^2b_2\$. There is no third-order coefficient as \$C_3\$ is shorted in this exercise.

If you draw intermediate sketches and write carefully all the time constants, without a single line of algebra, then you assemble the transfer function at the end: 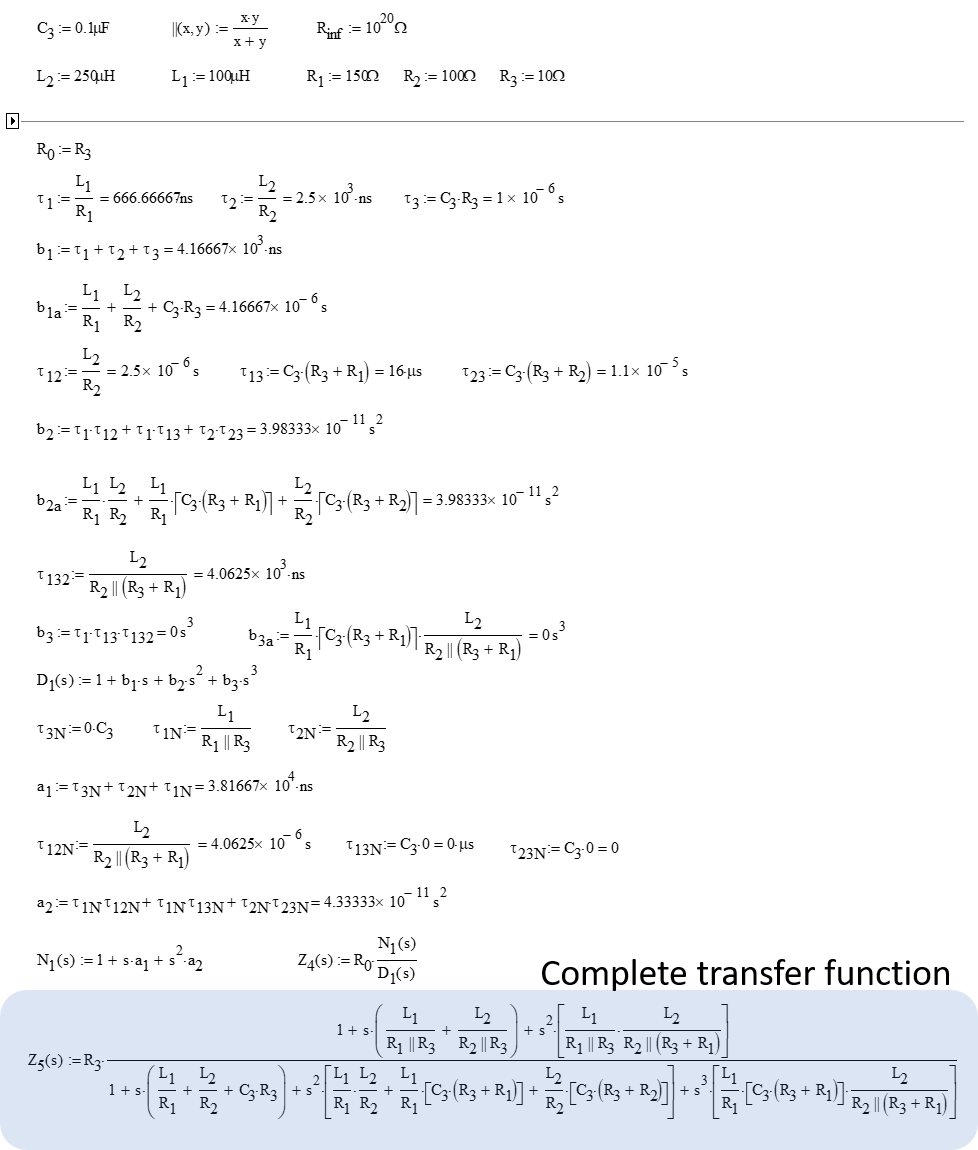 Finally, you can plot this expression and compare its response versus that of the brute-force formula used a reference here:

If you now want to extract the magnitude and phase expressions, I let you replace \$s\$ by \$j\omega\$ and collect real and imaginary terms. I'm done for tonight : )

If you want the phase and the magnitude of this transfer function, below are the expressions to compute them: 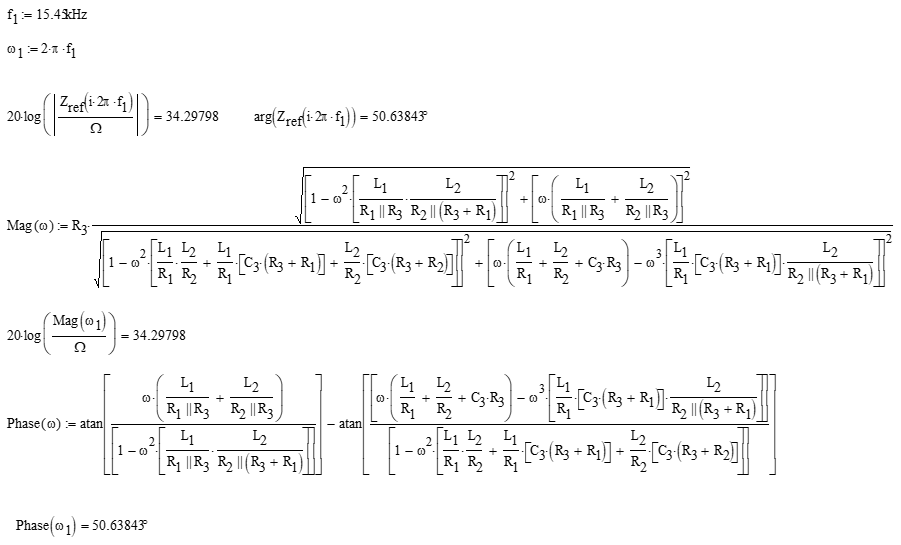 Not the answer you're looking for? Browse other questions tagged impedance passive-networks equation or ask your own question.