I've been getting some amazing info on this site so thanks for all the info so far!

I've attached 2 drawings...one of my current setup and one with a DPDT switch that will disconnect the motor and at the same time, short the terminals. (I think I've got the wiring right?!) My concern is that the current generated by the braking will still damage my SPDT relays that are used for polarity switching. Is there another way around this?

It's for an electric car. Motors are 12vdc pulling approx 4a no load. SPDT relays rated at 40a. 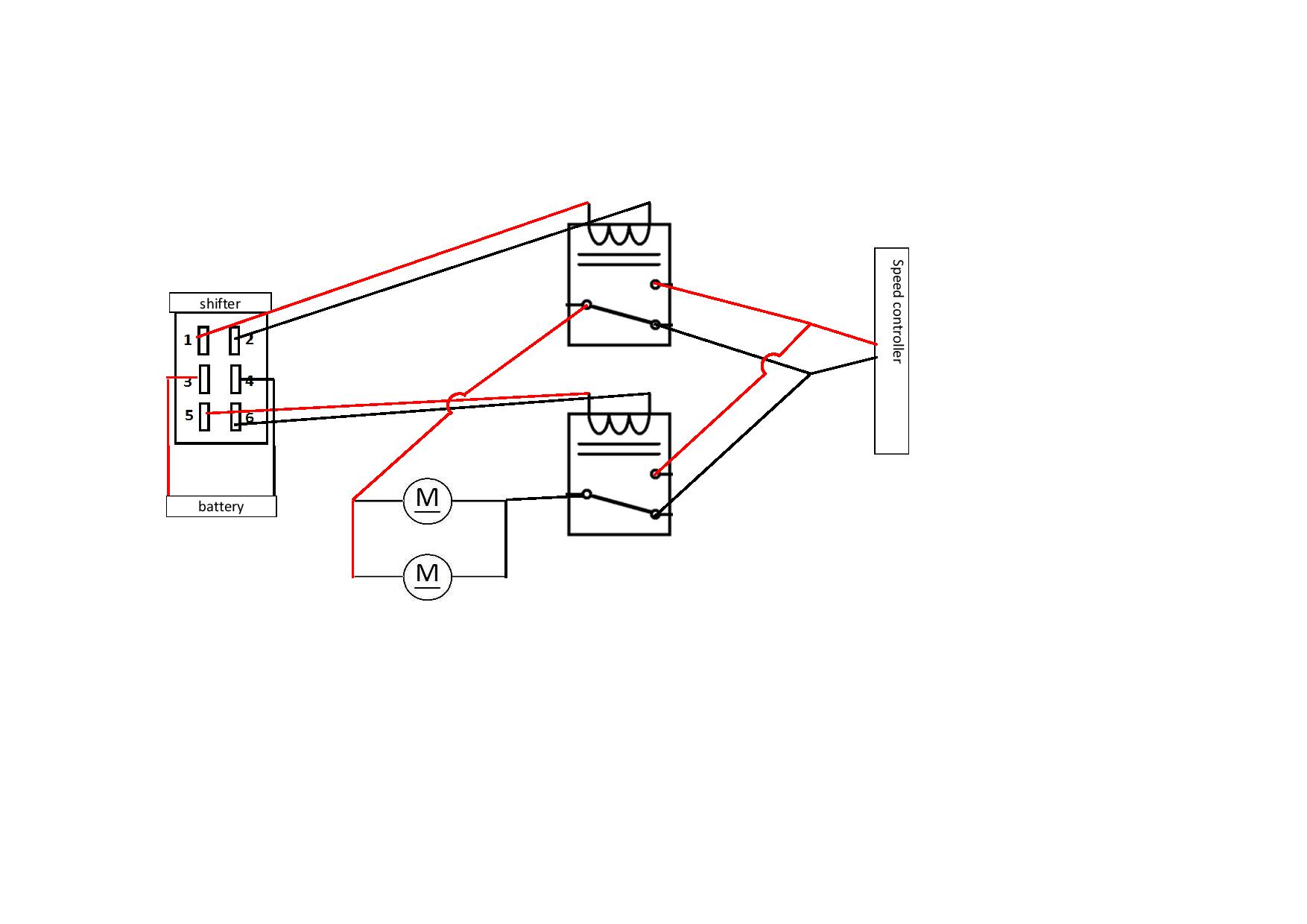 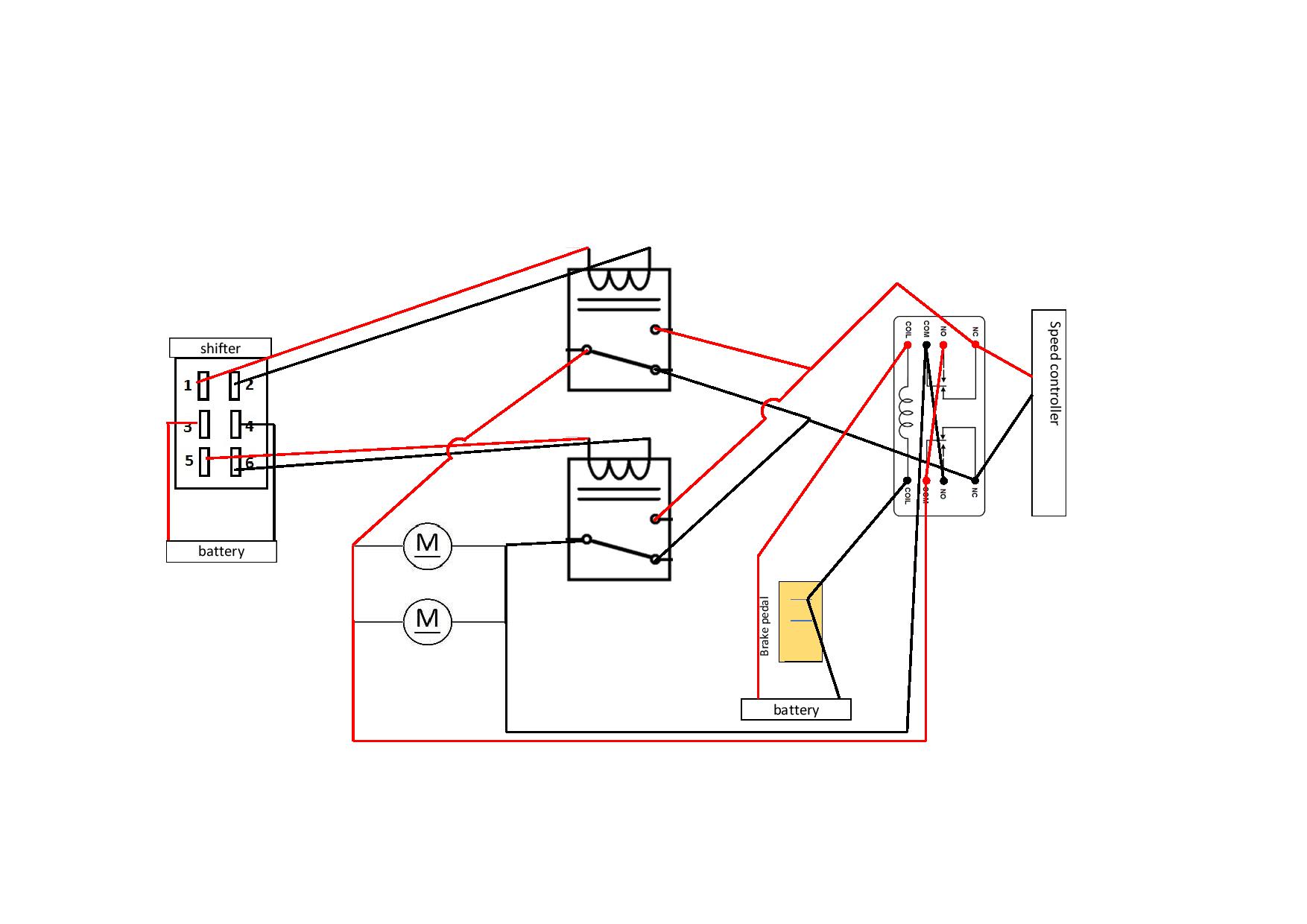 It is never a good idea to short motor terminals. For a permanent-magnet DC motor with a commutator, you need to disconnect the armature from the power source connect a resistor across the armature terminals. Rather than using just a fixed resistor, better braking performance will be provided by a PWM braking circuit that will regulate the braking current.

The ohmic value of the resistor should be chosen to draw no more than 150 percent of the rated armature current at the rated armature voltage. The power rating needs to be based on the motor plus load inertia, the load torque and the duty cycle. The total dissipated energy in the braking resistor for a braking cycle will be the energy stored in the rotating mass minus the energy dissipated in the load and in the motor losses.

First off, Charles Cowie is right: Drawing proper circuit diagrams that follow conventional sketch geometries is far easier for other people to interpret, than trying to make sense of a rat's nest of "connect the dots" pictorial diagrams. (Take a look at how professionally-drafted circuit diagrams are typically laid out, and you'll soon catch on. It's not difficult.)

That said, your second circuit is asking for trouble. To answer your question: No, the wiring is not correct. When you press the brake and your DPDT relay energizes, not only will you be shorting out the motor... but you will also be shorting out your speed controller.

Also... why so many relays? That makes your circuit more complicated (and therefore less reliable), and of course less efficient (by a wee small amount due to the relay coils' power consumption), and certainly take up more physical space and be more expensive than it needs to be.

Consider: If your shifter switch (which I'm going to call a "reversing switch", because that's what it does) can handle the current of the motors, why not use it directly to flip the polarity? Bridge terminals 1 and 6, and bridge terminals 2 and 5, on that switch. Then connect the motors across 3 and 4, and the power source to the two bridge wires. (Or connect the motors across the bridge wires, and the power source to terminals 3 and 4. Either way; doesn't matter.) Now you've eliminated the two unnecessary SPDT relays.

Now for your brake, use a SPDT switch if you have one; otherwise, yeah, use a single SPDT relay here: Connect one terminal from your speed controller output directly to your reversing switch input. Connect the other terminal from your speed controller to the normally-closed throw on the brake switch/relay. Connect brake switch/relay's common to the remaining input node of your reversing switch.

Now here's where you implement the actual brake: Connect an ENERGY DISSIPATING DEVICE across the normally-open throw on the brake switch/relay and the node which is permanently tied to speed controller and reversing switch. (A large ceramic resistor is a good choice, but a suitable incandescent light bulb might serve as an amusing "regenerative self-powered brake light" too. Just beware that if the bulb filament breaks, so do your brakes.)

You could simply make the brake circuit a "short circuit", so when you press the brake pedal, your reversing switch gets disconnected from the speed controller and simply becomes shorted to itself. Which in turn, ends up shorting the motor to itself. But as others have mentioned, this will cause excessive arcing at the motor brushes, which will also burn the commutator. Also, if you keep such a brake engaged for a long period of time in an attempt to dissipate a lot of mechanical energy -- such as trying to slow down the vehicle as it's rolling down a long and steep hill -- you might even overheat the motor windings.

As an "emergency brake" though (which is infrequently used, and almost never engaged while the motor is still spinning at high speed), you probably won't cause too much wear on the motor by shorting it. And after all, shorting the motor will yield the "most powerful dynamic brake" you can achieve.

Regardless, you don't need 3 relays. You don't need ANY relays, actually, if your reversing switch and brake switch can both handle the motor current... provided the brake switch is still double-throw, of course.

Not the answer you're looking for? Browse other questions tagged dc-motor motor-controller dpdt spdt or ask your own question.

1
Controlling DC brushed motor for dummies, please
0
Braking a small, high-speed DC motor
0
Braking a motor with power transistors
0
Electrical Braking: Why does voltage decrease with a decreased rheostatic load?
3
What could cause the mosfet to burn out in my motor driver?
0
Help with brake in motor control
0
Resistive braking of series wound DC motor
0
Issues with 2 motors in series
2
High-power motor driver without driver IC