I was reading the chapter about Op - Amp design in Microelectronic Circuits by Sedra Smith, and I have some questions about the so called "common mode feedback" (CMFB) which is used to control some current mirrors. 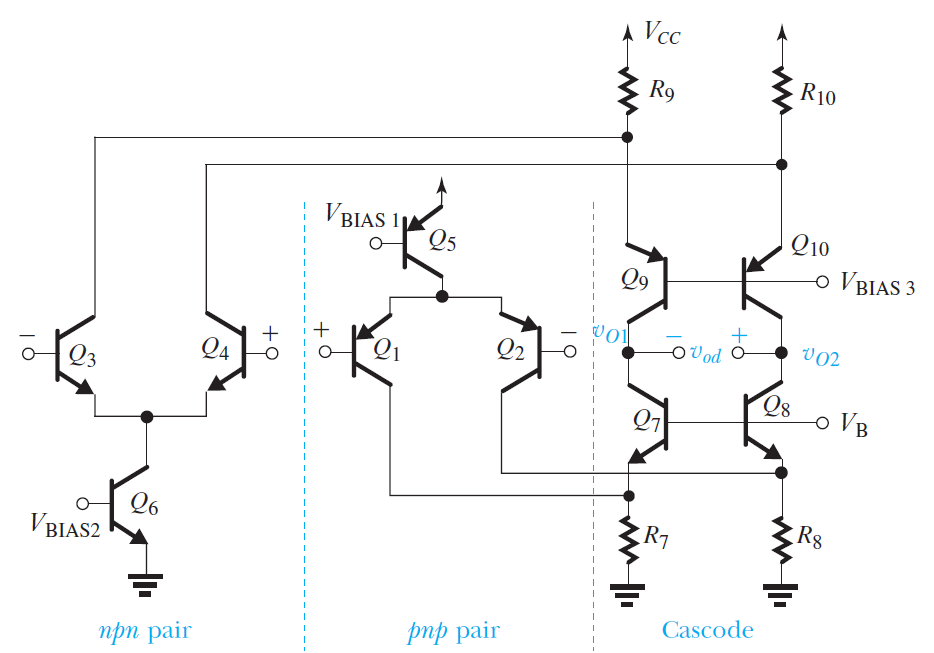 Relying solely on matching will not be sufficient to ensure that the currents supplied by Q9 and Q10 are exactly equal to the currents supplied by Q7 and Q8. Any small mismatch \$\Delta\$I between the two sets of currents will be multiplied by the large output resistance between each of the collector nodes and ground, and thus there will be large changes in the voltages vO1 and vO2. These changes in turn can cause one set of the current sources (i.e., Q7 −Q8 or Q9 −Q10) to saturate. We therefore need a circuit that detects the change in the dc or common-mode component VCM of vO1 and vO2, VCM = 1 2 (vO1 +vO2) and adjusts the bias voltage on the bases of Q7 and Q8, VB, to restore current equality. This negative-feedback loop should be insensitive to the differential signal components of vO1 and vO2; otherwise it would reduce the differential gain. Thus the feedback loop should provide common-mode feedback (CMF).

1) How is it possible that for instance current of Q9 is different from that of Q7? Their channels are in series (since the load is supposed to be of infinite impedance) and so, by kirchoff current law, all the current through Q9 should go on Q7, I think...

2) Does the book refer to DC or signal currents?

1) The currents of Q7/Q8 and Q9/Q10 are set by the bias voltages. It is very difficult to get this bias voltage exactly right without a feedback network, so the theoretical collector currents would differ. This discrepancy in current results in wild shifts in output voltage as a result of the Early effect (i.e. R_out in the small-signal model of each BJT).

2) The DC bias itself is susceptible.

How is it possible that for instance current of Q9 is different from that of Q7? Their channels are in series (since the load is supposed to be of infinite impedance) and so, by kirchoff current law, all the current through Q9 should go on Q7, I think...

Assume that you have identical transistors including pnp and npn. Suppose you set the bias \$V_B\$ such that \$V_{BE_{pnp}} \ne V_{BE_{npn}}\$. Assuming the system starts with both the transistors in active region, the two transistors are going to have different currents. Let's say npn has smaller \$V_{BE}\$, thus at node \$v_{O1}\$ less current is being sunk to ground then what is being sourced from supply. The potential at this node will rise as a result. And in steady state or DC the pnp will go into saturation. In DC, the current through the pnp is same as npn but you will loose all the gain as pnp is saturated. This needs to be avoided via CMFB.

Does the book refer to DC or signal currents?

0
maximum possible common mode voltage for npn
0
Sedra and Smith - Common Mode Input Resistance
3
Need for common-mode feedback
0
How do we explain the common-mode feedback in an intuitive way?
0
Dependency of Collector current in common base transistor(active region)
0
What is meant by this statement about op-amps?
0
How to set up an LTSPICE test bench for Common Mode Feedback Loop Stability