To test an offline switching PSU I decided to build a custom isolated high voltage variable PSU. The idea was to build a nice, small, low power equivalent of a variac and isolation transformer that is commonly used in this scenario.

The idea was to use two stock transformers 'back to back' with a variable voltage load in the middle to simply waste the excess power. As the design only called for a few Watt's power this is not much heat to get rid of. The concept is similar to the helix regulator in Luis Cupido's TWT PSU.

The variable load circuit I came up with worked nicely on the bench when dropping a constant DC current but when combined with the transformers it oscillates wildly. This seems obvious in hindsight as the transformers are an inductive load and there is AC ripple across the variable load circuit which will get into the feedback network and wreak havoc.

As feedback compensation is not my strongest point I was hoping for some advice about what to try to stabilise the circuit or if it is even possible. The unit could be useful for safely (relatively) testing of low power circuits that need higher voltage. A simple rectifier, filter cap and bleeder resistor could turn this into a 0 - 340 VDC isolated PSU.

The schematic is simplified slightly, not shown are the internal 12 VDC supply or any protection / switching of the mains. The LM358 also has the second op-amp input grounded and it has bypass caps. 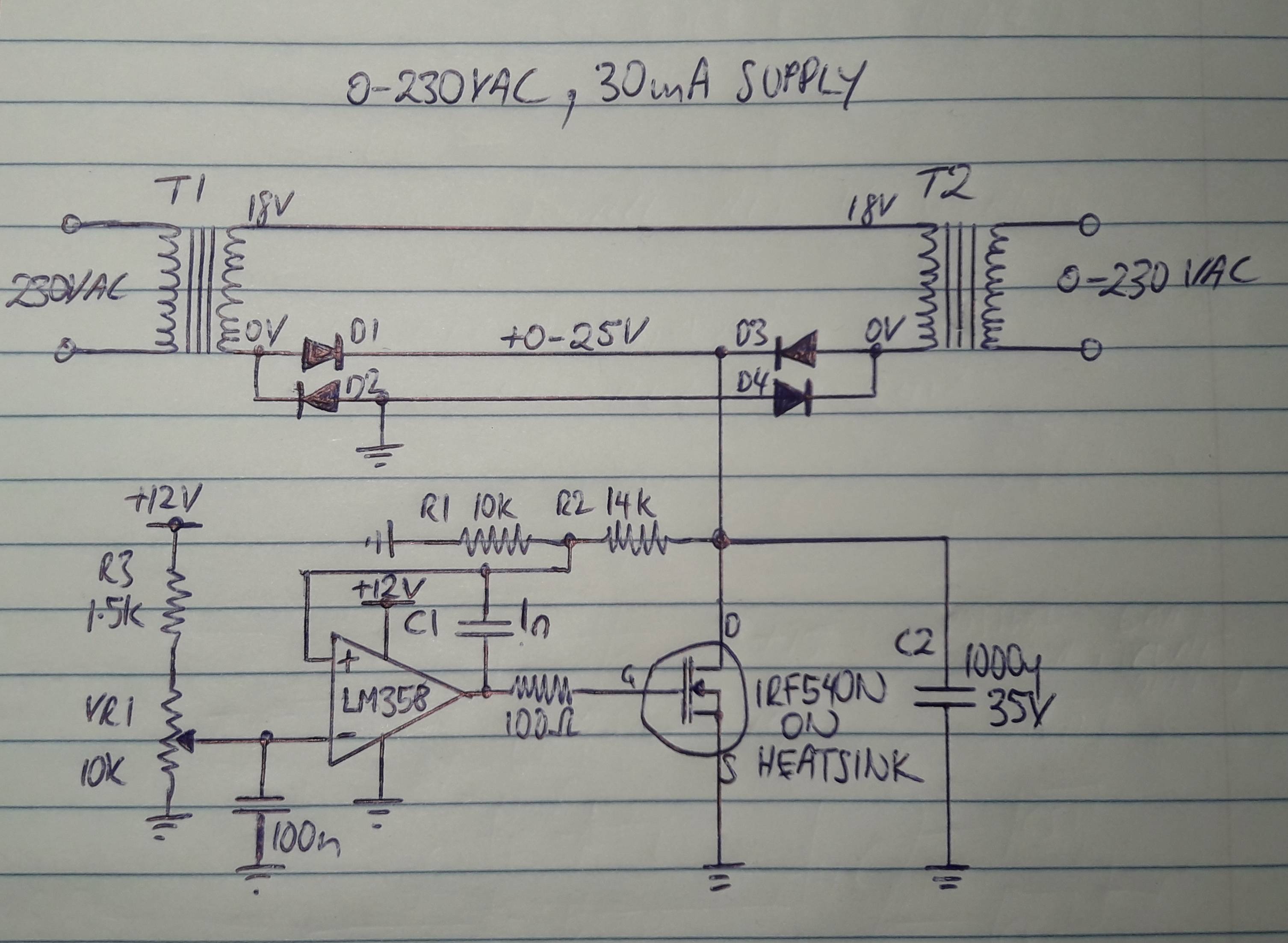 I wouldn't hesitate to trial this out with a simulator like micro-cap 12 (now free). But, if you want to try something, interrupt the feedback R14 resistor: -

And add some strong filtering to remove the cyclic content to just leave the average voltage fed-back to the op-amp. Maybe something like two 7 k resistors in series with a 10 uF ceramic at the centre point to local ground.

You might also enhance this filtering by increasing C1 to 100 nF.

The general idea here is to let the op-amp work with the average DC level across the MOSFET instead of trying to handle all the cyclic AC content. If this appears to improve things, I would also try getting rid of C2 (1000 uF) as it's just a source to make the MOSFET hotter from what I can see.

I did not go into detail through your post. Apologies if I have missed something. The Mosfet is a high gain device. My advice and guess would be (two different ones):

Not the answer you're looking for? Browse other questions tagged power-supply ac feedback compensation or ask your own question.