I could use some advice please.

I am looking to use a set/trip relay as part of a safety critical circuit. Both set and trip supplies are interlocked via other contacts but I am in the process of doing a FMEA, and was looking at what effect it would have on the relay if both coils were energised at the same time under a fault condition.

The relay is an Arteche BF-4BB latching relay with coil over voltage protection.

I believe the relay would not chatter and the circuit with the most impedance will eventually win. The supplies to the coils are both driven by timer relay contacts and are asymmetrically off-set. (that is, the set coil is driven from a 2 second constant supply and the trip coil from a 4 second constant supply.) 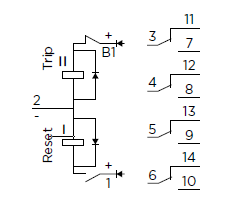 The manufacturer's page gives minimal technical information and given the evident significance of the application and the intended use of the relays then a query to the manufacturer looks to be by far the most reasonable solution. I may be wrong :-).

You cannot guarantee any result if you present conditions not defined by the data sheet.

EITHER your answer is in the data sheet
OR we, like you, can only speculate.

I would EXPECT that if both conditions were applied then the relay would "most likely" remain in its last state while both remained applied - BUT this is uncertain.

It is more certain but not certainly certain that if one remained applied for longer than the other by more than the maximum time to operate/release that it would produce the final result
BUT it is possible that the dual application MIGHT put the device into an undefined state that locked it.

The safest approach is to build a circuit that operates in a fail safe manner such that dual application is not possible. This is harder than not doing it but hardly hard. You can then decide what action you desire in any combination of dual coil activation attempts.

Note - you may need to add eg

There are likely to be other "maybes" which you meed to examine the implications of.

The problem i have is that i am having to do the whole circuit via relay logic rather than plc, i have a number of interlock auxiliary contacts in the circuit and the circuit is controlled by sprung load rotary switch. But I was more curious than concerned about the circuit design as it will always fail safe.

Depending on how important it is to you, you could eg lockout the set coil when reset_in is asserted, using a relay to do it.

For "extra points you could have a relay which continues to lock out access to the set coil for as long as set_in remains asserted if set_in is ever asserted when reset_in is asserted. May take 2 or 3 extra relays - only worthwhile if the result is important to you. Without such, if set and reset are asserted together you'd expect the last man standing would win.

Not the answer you're looking for? Browse other questions tagged latching-relay or ask your own question.