Why can an AC circuit breaker not be used in DC circuits?

Are there any significant safety hazards with this technique? I mean I was thinking since it's the current that matters maybe these breakers can be used with 6V/12V/24V circuits where the currents are generally going to be drawing only under 20 amps in the above mentioned case while using, but in a short circuit scenario, the current will be in 35A to 55A range thus causing the breaker to trip.

Update: I had these two breakers from the old panel in my storeroom. What you guys said is very true. It seems to be quite dangerous to use them in DC too. I have a high-current 12/24V supply capable of 35-amp output. But I’ll only be using it under 20 amps mostly. I build these supplies from UPS transformers. So, I tried to connect the three supplies and I had built to the GE breaker, in short, to see its response only 2 seconds power ON. The first one was with the biggest transformer from a 2000VA UPS. It had very thick low voltage windings (10AWG likely) and shoutings the AC low voltage caused the breaker to trip in 39-41ms. With another transformer from a 700VA UPS from low voltage AC side, it tripped at around 1.17s and finally from a 300VA UPS transformer low voltage AC the breaker did not trip. Now trying the first two transformers I’m dead short on the breaker via a 50 Amp rectifier (Imax peak 400A briefly) I was surprised the breaker didn’t trip even after 2 seconds and I immediately gave up the DC breaker idea. I’ll put the breaker on the AC low-voltage high-current side for safety and add a 400-amp rectifier to protect in case of a dead short. 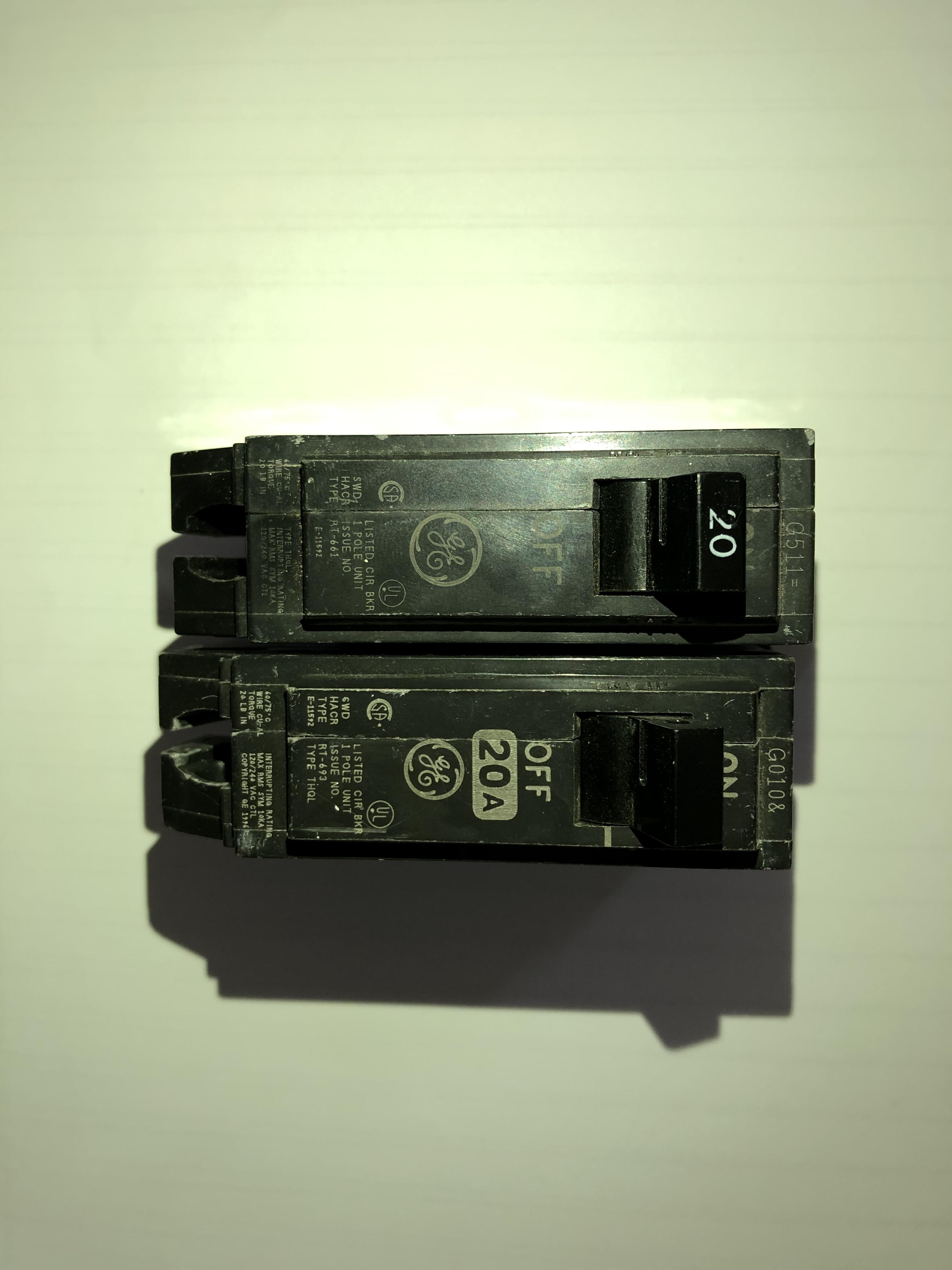 You certainly can use Square D "QO" panels/breakers on DC

And the reason you can do that is Underwriter's Laboratories (UL) listed the breakers for DC service, and the labeling and instructions (which are approved by UL) state that explicitly. This was backed by testing in UL's lab. This is a condition of using them in mains power (NEC 110.2).

Naturally, you must read the instructions and data sheets, and use them conforming with those instructions (required in NEC 110.3(B) and 110.12).

So as long as you use breakers listed for DC, and follow the instructions, Bob's your uncle!

So, let's say after testing it in a DC circuit with some loads and ammeter + clamp DC amp meter I find the current at which the breaker trips. Let's say this is 45Amps.

Current singular? You think the breaker is that simple, trips at 45A does not trip at 44A? It's not like that at all.

Together, these two mechanisms create a fairly complex trip curve with manufacturing tolerances: 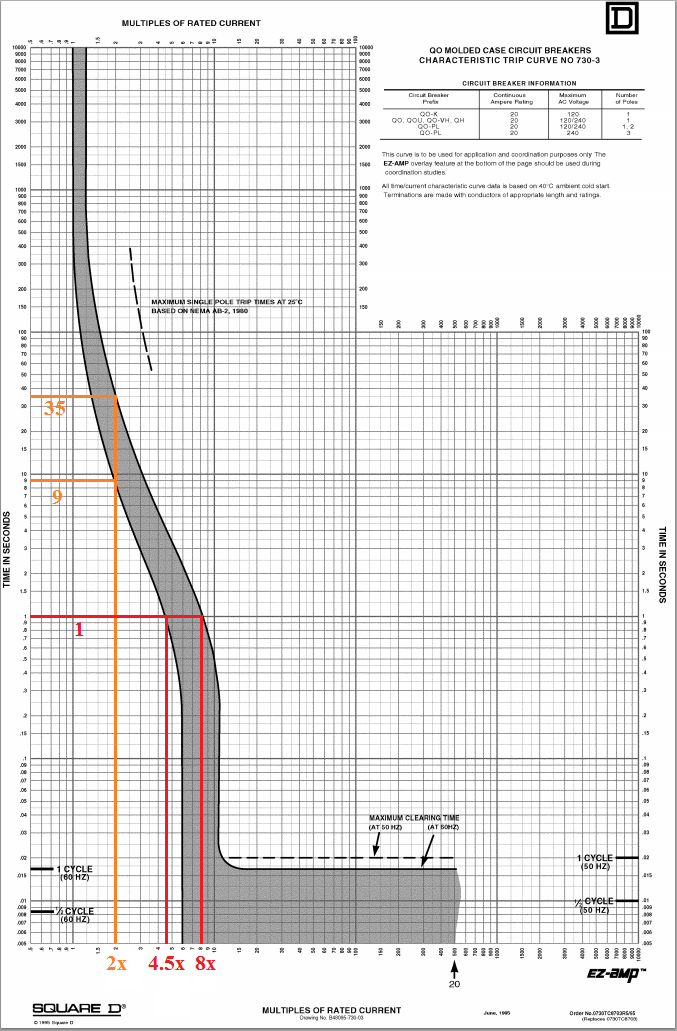 Now look at that video again. Mind you, the youtuber had already been "warming up the breaker" with a slight 115% overload. And upon overloading at 2x, it tripped in 13 seconds - which considering the previous "warming up", is pretty much center of range.

In other words, that Euro-DINrail breaker tripped very consistently with the spec of a Square D QO type which actually is rated for DC.

Because the youtuber has never met a breaker trip curve, has no idea this is normal, and is just "making stuff up" for the camera.

Nonetheless, the youtuber is correct: Since the breaker is not listed for DC, it must not be used with DC.

Here's another video of someone punching 340V DC (that's 240V rectified and smoothed) through another 6A mains breaker definitely not listed for such high voltage DC. Higher voltage DC is very nasty stuff.

The most important part, though, is that this youtuber tests the breaker on AC first, and it trips almost instantly. But on DC it trips much slower. This is a huge red flag that something is horribly wrong and that breaker is not fit for that purpose.

The arcing and smoking after the trip is because 340 volts DC is a Very Nasty Customer. This is 600 VDC.

Obviously, if you do stupid experiments, you get stupid results.

Use components according to their labeling and instructions. Do not attempt off-label uses.

Look for SWD and HID ratings

One more thing. Since you're dealing in North American stock, watch for SWD (SWitching Duty) endorsement; these are listed for use as switches on a daily basis. Virtually all new stock is this; it's for the common commercial application of using a subpanel specifically to power banks of lights, and using the panel as the light switches.

Also look for HID (High Intensity Discharge) endorsement, which means the breaker is specifically rated for daily switching duty, while dealing with the large inductive kick you get when interrupting highly inductive loads (such as HID or fluorescent lighting that uses old-school magnetic current-transformer ballasts). Nobody's installing magnetic ballasts today (except indoor horticulture), but DC loads present similar arcs. So if you are dealing in a DC-rated family of breakers, all things being equal, an HID breaker will be better.

Direct current is more difficult to interrupt because it is continuous. Alternating current alternates polarity so it crosses zero on its own which helps to extinguish the arc produced across the breaker contacts when they open. The contacts doesn't get this help if it's DC so the contacts have to be hardier.

Interrupting DC with an AC relay/breaker could cause the contacts to weld shut or become degrade the conductivity.

These videos show an example of a common wall mounted AC light switch being used with DC current, the examples are a bit extreme but over time even low voltage DC currents can cause failure. Adding a snubber of some sort across the contacts may help but the switch may still fail over time.

If you'd ever worked on DC where it's heavy load circumstances. They have arc shields and arc arresters to try and extinguish those arcs. It is completely different than AC circuits. From experience I have accidentally shorted out 240 volts AC and nothing happened there was a spark and the breaker trip. I also have shorted out 250 volts DC and I burned the heck out of my hand and had to go to the hospital from the ark. End of story