I have this problem 3.32 from Fundamentals of Electric Circuits 6th edition by Alenxander and Sadiku. I have drawn the circuit in LTspice. My goal is to solve this problem using nodal analysis and supernodes. I am not sure how to handle have two supernodes in series, can someone give me a suggestion? 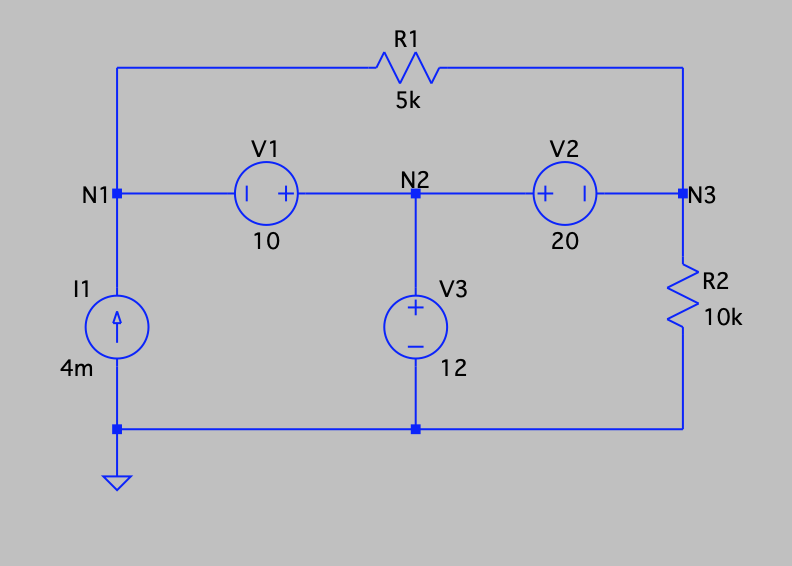 This problem is for an intro to circuits class. Its asking me to identify the voltages at N1, N2, and N3. In this section, we were dealing with super nodes. From the supernode definition I know that a supernode is when a voltage source is connected between two nonreference nodes. Notice, and the part that is confusing me is that between N1 and N2 there is a supernode, and there also is one between N2 and N3. This problem is very easy as I know the solution doesn't even yield a KCL equation. I don't understand how the supernodes are working in this problem. I am really thankful for all the quick responses, hopefully that clarified what's going on in my head.

But, as always with nodal analysis, the very first thing you should do is select a reference (ground) node. LTspice will also expect you to designate one of the nodes as ground.

Semi-quoted from the wiki, the wiki definition is better to my opinion.

So, not required, but still solvable!

The circuit of OP has 3 supernodes:

The supernodes yield the following relations(1)

Normally these additional equations help solving the KCL, but this example makes things worse to understand.

Not the answer you're looking for? Browse other questions tagged nodal-analysis or ask your own question.