I'm testing a circuit design for a constant-temperature anemometer using an NTC thermistor as the sensing element, and the behavior of the circuit has me confused. After struggling with various changes to the circuit and re-reading some of the resources I've used so far, I wanted to post here to see if anyone might be able to offer insight as to what I'm doing wrong.

I think I understand the basic idea behind a CTA bridge circuit - a sensing element in a Wheatstone bridge generates a differential voltage between the midpoints of each bridge leg, which a difference amplifier then corrects by modulating the bridge excitation voltage until the sensing element is heated sufficiently to balance both sides of the bridge. Perturbations (i.e. from passing airflow) cause the error signal to reappear as the sensing element changes temperature, which is then corrected by the amplifier, and the change in bridge excitation voltage (or amplifier output, if different) can be measured to sense convective cooling. Beyond that level of detail, I'm a lot less clear - I haven't been able to find much (consistent) info on other design parameters like gain, offsets, sensing element resistance value selection, etc. beyond the general advice that the total resistance of the "passive" leg of the bridge be 5 to 20 times that of the "active" leg.

I'm trying to use an instrumentation amplifier (INA126PA) as my difference-sensing amplifier, although I've seen a lot of designs that use normal op-amps (it took me a while to realize that control of the bridge excitation voltage, even through a transistor, works as gain feedback in this case). Additionally, I've seen that a lot of designs use a BJT as a current amplifier between their difference-sensing amplifier and the bridge itself, so I'm using an NPN transistor (TIP31G) for this purpose. I'm not using 0V as my instrumentation amplifier reference voltage because the INA126PA isn't rail-to-rail (not even close, minimum swing is about 0.7V), so I'm feeding 1V in through a buffered resistor divider incorporating a potentiometer so I can modulate this value. My circuit diagram is below: 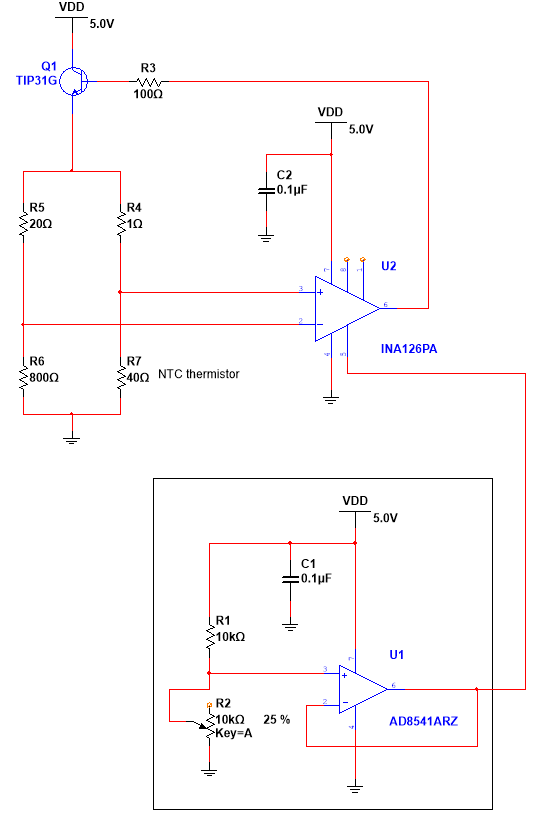 My justification for using an NTC thermistor in the bottom portion of the leg leading to the non-inverting input is based on that same strategy being used here, which seems to make conceptual sense. If airflow increases, the thermistor is cooled and since it's NTC, the resistance will increase. This will raise the voltage at the noninverting input, increasing the error signal and the NPN base current. This should drive more current to the bridge, increasing the NTC temperature and bringing the bridge back towards equilibrium.

Here's where things start going awry. I started out my tests with an instrumentation amplifier reference voltage set to 2.5V - theoretically, I'd expect to see 2.5V at the amplifier output when the bridge is at equilibrium, regardless of what else is going on. However, I'm consistently seeing voltages below 150mV at the amplifier output, the "top" of the bridge, and each of the inputs. My initial thought was that the bridge needed an initial "kick" to get any amount of current flowing since the BJT will start in cutoff, so my assumption was that it was simply remaining in cutoff (although I still don't understand why the inamp Vref isn't introducing an offset in and of itself). I tried adapting the solution mentioned here - adding a 10k resistor across the collector and emitter and/or a 1M resistor from the noninverting input to the positive rail, but no combination seemed to make a difference. I did notice that if I connect a 10k resistor in a similar manner to the 1M resistor I just mentioned (between 5V and the noninverting input) I saw a minor increase in measured voltage (and some response to airflow, on the order of a few 10's of mV), but I don't think this was due to the 10k resistor acting as a "starter" because its removal after equilibrium is reached causes the voltage to fall again - I think it was just acting as a shunt.

FWIW, I've tested this instrumentation amplifier circuit against other voltage sources (fixed resistor dividers) and it behaved exactly as expected, so I don't think that's the source of the discrepancy. I've also noticed that when I bypass the BJT entirely and just drive the bridge directly from the inamp output, I get the exact same voltage as with the BJT - this makes me think it isn't an issue of BJT operating region, after all. Additionally, when I attempt to simulate this circuit using Multisim, I get similarly small voltages for each of the nodes I've mentioned already (not exactly the same, but far less than 1V in every case - I'm assuming resistor tolerances and thermistor resistance changes probably account for the difference here).

Right now the inamp gain is set to 5, with no resistance between pins 1 and 8. I've increased gain to about 85 by connecting a 1k resistor here, however changing the gain appears to have no effect on circuit behavior in this case.

If anyone has any suggestions, or can point out errors made on my part, I'd definitely appreciate that input. If a working CTA is even possible using the components I've selected, my first preference would be getting things working by changing the circuit topology, however I could also try different amplifiers and/or transistors if necessary. I also have a few other values of NTC thermistor I could try out, if that's relevant (I've substituted in 40, 100, and 1k thermistors thus far, with appropriate "top" resistors and larger passive leg resistors, but that hasn't solved the issue thus far). My main interest is in trying to understand what's not working here, so I can better understand CTAs in general. I imagine I'm probably making a silly error, but I'm too far down the rabbit hole to realize it at this point.

Thanks in advance for any help/insight/suggestions you might be able to give! Let me know if any other relevant information is needed, and I'd be happy to provide it.

Assuming the bridge is balanced at nominal temperature, and you cool the thermistor...its resistance increases. This causes the positive input, and thus the output, to increase, driving a higher voltage to the bridge. That increase thus proportionately increases the voltage to the bridge, which enhances the difference between the bridge branches. That's positive feedback...is that what you intended?

Not the answer you're looking for? Browse other questions tagged wheatstone-bridge or ask your own question.

1
Anemometer with opamp
0
What does this resistor do in this RTD wheatstone bridge?

0
MCP6N11 voltage reference and output problem
0
Simulating a Constant Temperature Anemometer
2
Compensating for offset voltage in bridge measurement before instrumentation amplifier
1
What can be the reason for the extra connections from this Wheatstone bridge to the amplifier?
2
How are the terminal voltages regulated for this Wheatstone bridge?
2
How to calculate the value of the thermistor based on the output voltage of this circuit
1
Anemometer with opamp
2
Respiratory rate monitor
12
Need help understanding schematics in LT1019 datasheet