How do I recognize which type of bus bar these are? What are thecharacteristics of their circuit? They are so similar

I have a big problem with matching bus-bar names with their corresponding circuits.

For example, there are four circuits for 5 main types of bus bar, but I can't match the name with their corresponding circuit. single bus-bar is easy to recognize, so I don't ask in this question.

The A type is the circuit of double bus: 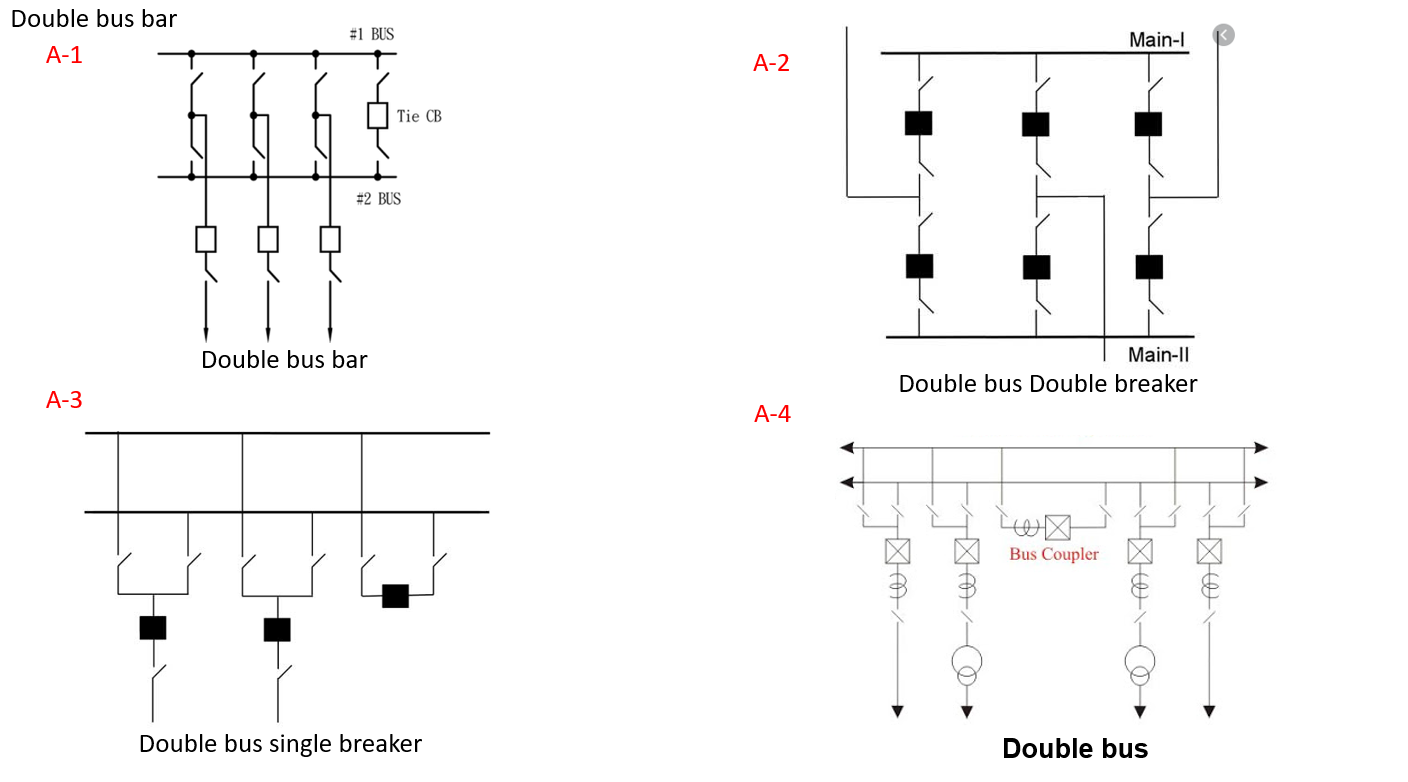 The B type is the circuit of main and transfer bus:

The C,D,E type is the circuit of one and half, ring bus, and mesh bus: 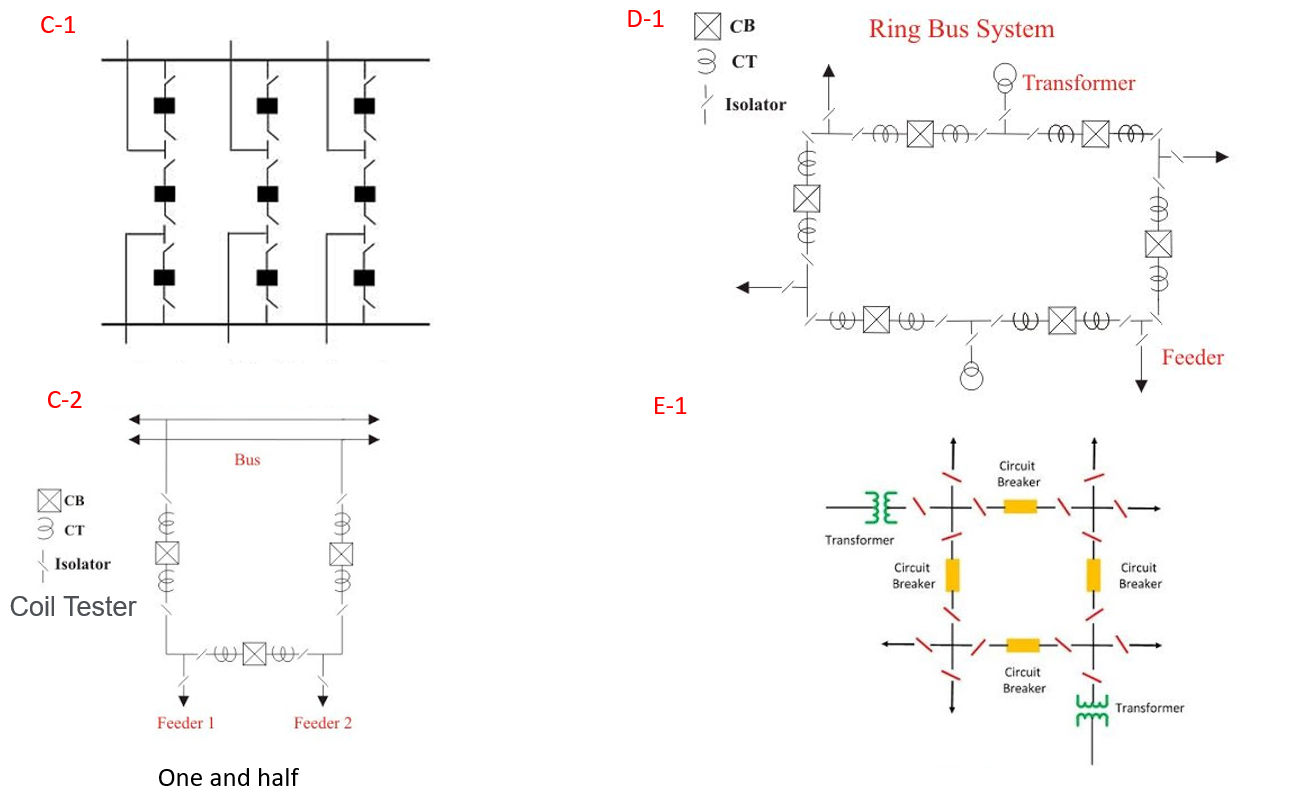 As we can see some of them are very similar, so how do I know this bus is double bus, not main and transfer bus. What are their characteristics?

If this is a basic question, sorry for asking this. My book only tells me their corresponding advantages and disadvantages but dorsn't explain how to recognize them.

The arrangement of switches and breakers just sets up the possibilities. How the utility chooses to operate is what makes the difference. Using your figures here are some examples/comments:

A-1 - in this arrangement it is clear that to you cannot bypass any of the breakers. You would have some breaker(s) tied to bus #1 and the other(s) to bus #2, and run with the bus tie breaker closed. Bus differential relays would need to be configured properly to do 87 protection on bus #1 and #2. Then, a bus fault on either bus would not open all three lines. This extension to the single breaker-single bus configuration allows flexibility if two separate sources feed the buses. In the event that one source is lost both buses can still be fed with the bus-tie breaker closed. It also allows service to remain intact to one bus in the event of a fault on the other bus. In this case the bus-tie would be tripped if it were normally closed (most likely normally closed).

A-2 - in this arrangement you can lose either bus (Main-I or Main-II) and not lose any network connectivity. Trade off for this security is cost.

A-3 - this configuration is similar to A-1 but with the addition of buswork and switches to allow connection of the line breakers to either bus. This allows a large degree of flexibility for operations. The buses can be operated tied together or separate. One can be used as a transfer bus for sparing out a line breaker. A major drawback to this flexible configuration is the complicated switching of protection circuits that is required. Two differential zones are required. Also, some reliability is lost because of the common mode failure associated with the tie breaker. Both buses must be cleared in the event the tie breaker fails.

A-4 - same as A-3 except using British name for bus tie breaker (bus coupler).

C-1 - breaker and a half configuration. This bus arrangement is more flexible than the ring bus configuration (your D-1) but requires more breakers. Two bus differentials are required. The “half” designation comes from the fact that the center breaker serves both lines. Again, two breakers must be tripped to clear a line fault. No interruption will result for the other lines if all breakers are in normal service. Also, the ratio of breakers required to lines serviced is 1.5:1.

D-1 - good old ring bus.The ring bus does not require bus differential relaying since every section of the ring can be considered part of a line. Regular line or transformer relaying can protect all sections of bus. Also, the ring bus doesn’t require spare line relaying and has a 1:1 ratio of lines serviced to breakers needed. The ring bus configuration is very common, especially for EHV applications. Like the double breaker-double bus configuration (A-2), two breakers are required to clear line faults. Also, if the ring is open for any reason, clearing of a line fault will separate the other lines. With more than three elements (lines or transformers) in the ring bus a line side disconnect is required so the ring can remain intact with an element outaged.

Here is another configuration that is/was pretty popular at TVA. It is called a Z-bus arrangement. 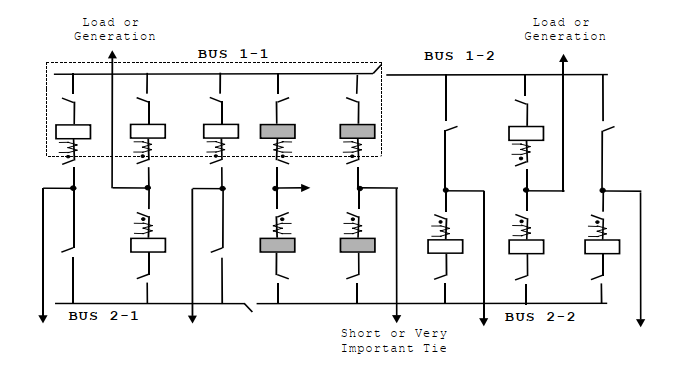 The Z-bus arrangement has two main buses located on opposite sides and ends of the switchyard (Bus 1-1 and Bus 2-2 in this drawing). Typically two or three lines are terminated on each main bus section. Transformer banks or generators are terminated in the bus-tie bays, allowing them to be normally connected to the system through either or both tie breakers. A short “preferred” service line can be connected between two breakers in the tie position (some critical load). Complexity is added for this scheme as care must be taken to ensure that the proper potential is applied to the line relaying in the event the buses become separated.

Here is another arrangment called a zig-zag bus that is really just an extension of the Z-bus above:

The zig-zag bus can be thought of as concatenated Z-buses. The zigzag arrangement was developed to enhance system stability, for continuity of service to important loads, to maintain system ties when a bus was out of service, and to allow maintenance without loss of function. The zig-zag bus is used primarily at generating plants where considerable capacity is installed.

Not the answer you're looking for? Browse other questions tagged power circuit-analysis bus busbar or ask your own question.

2
How does a connection of a wire to a bus bar work without overheating?
3
Addressable simple serial bus for medium distances using PIC microcontrollers?
0
Why do circuit analysis methods work?
1
Why are capacitors needed in dimmer circuits?
0
Why are inverter bus bars made overlapping?
1
What's the performance difference between these two differential amplifiers?