The chance of a lightning strike - reduced or increased?

If I connect the receiver and TV body to the earth, does it reduce or increase the chance of lightning strikes the dish antenna?

The purpose of bonding metal objects to earth is primarily to reduce the chance of a lightning strike. This works by allowing charges from the earth to migrate up a metal conductor (grounding cable, antenna mast, or the classic pointed lightning rod), leak off into the atmosphere, and so help to dissipate the charge buildup between the earth and clouds that, if not reduced, could build up enough potential to allow a lightning strike.

Providing a conductive path to earth should a nearby strike occur is secondary.

Even large cell phone towers, while well bonded to the earth, usually have a series spikey rods near the top. The points at the tips of those rods help the charge to bleed off.

Go look at some pictures of farm houses and barns with an array of lightning rods along the ridge of the roof.

It would increase the likelihood of the receiver getting struck, but the chance of getting hit would still be small. To understand this, we need to start with a description of how a lightning rod works.

A lightning rod offers a preferred path for lightning locally, rather than the building, so that instead of striking the building, it strikes the rod and travels to the ground. So it helps prevent the building itself from getting hit, but it is not attracting a lightning strike that otherwise would not have hit the building or somewhere quite close.

You might call this 'attracting' the lightning locally, but the details are a bit more nuanced. When the lightning strike is propagating downward from a charged cloud, shortly before striking the building, a weaker discharge begins at the lightning rod and travels upward to meat the larger downward discharge. From there, an ion path has been established, and the electrical current travels to the rod and then to ground, instead of hitting the building and then finding the best path to ground.

Here is a great high-speed video of the process happening. A photo from the article is below. You can see the upward discharge beginning at the lightning rods on the building. 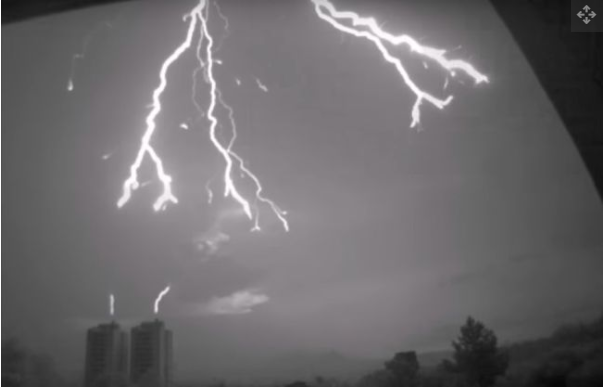 Edit after looking into it a bit more: It appears that the theory of how a lightning rod works, whether by dissipating accumulating charge to prevent the strike (the 'dissipation theory') or by encouraging the lightning to hit the rod instead of the building (the 'diversion theory') is somewhat controversial. I found this source somewhat useful.

The results of this study suggest that moderately blunt metal rods (with tip height–to–tip radius of curvature ratios of about 680:1) are better lightning strike receptors than are sharper rods or very blunt ones

And a bullet point from an abstract this to scientific paper also seems quite pertinent:

(c) Elevated, blunt rods or horizontal conductors, suitably connected to earth, can provide better lightning paths to earth and therefore, better protection to structures in their vicinity than do sharpened rods.

I believe this supports the notion that the probability of a strike to an object such as a grounded dish antenna is increased rather than decreased, but again, there is controversy.

If I connect the receiver and TV body to the earth, does it reduce or increase the chance of lightning strikes the dish antenna ?

Lightning will not see a length of cable connected to earth as a preferred path until it actually hits the installation. Think about a lightning conductor on a tall building; it's not fitted to attract lightning to the building (\$\color{red}{\text{because that would be silly and asking for trouble}}\$) but, if lightning were to actually hit the building, the current surge would tend to follow the path of highest conductivity.

Not the answer you're looking for? Browse other questions tagged earth lightning isolated or ask your own question.