We are ordering batteries for powered wheelchairs from relatively big Chinese company specializing in large power banks (I am talking whole-house scale here). Our orders for them is just a side-business probably not deserving much attention. Recently they suggested using "smart BMS" on our packs and sent us couple prototypes. Unfortunately, we were unable to connect to their UART port.

First of all, for some reason they wired the GND from UART connector back to "-" of the battery pack. Pointless, but harmless. What is more puzzling is that neither of the remaining two wires (which I assume are RX and TX) have any voltage on them. Since UART typically idles at "high" I expected to see 3.3V or 5V on one of them. As it is, it could be that they are using inverted UART-TTL signalling, or maybe open-collector TX.

We contacted MANUFACTURER (not some unknown seller on alibaba, as it is often the case) and got back BMS documentation in Chinese with zero information on UART except for mention that it is supported. And also attached was this picture: 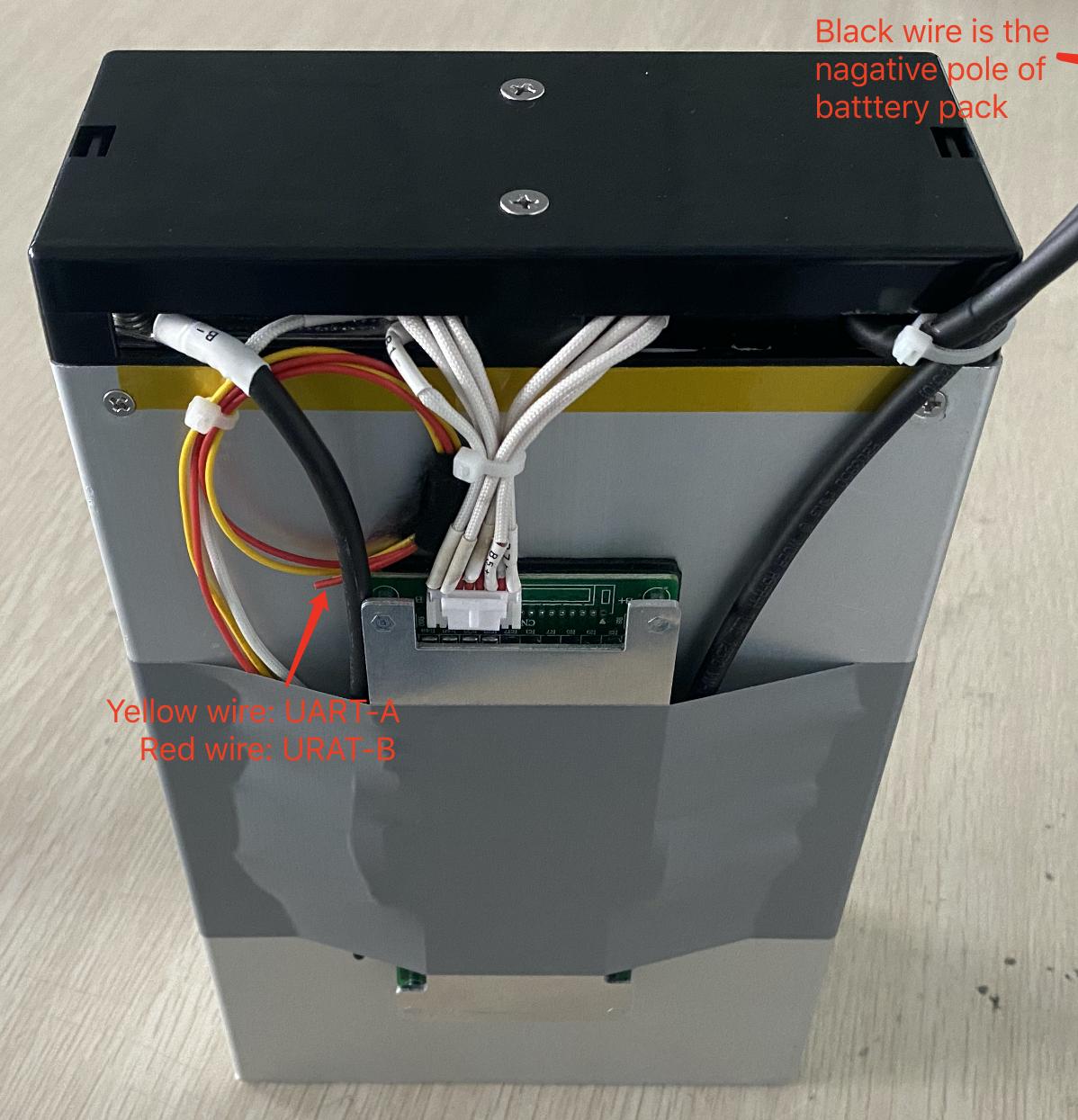 My guess is "UART-A" and "URAT-B" is someone's attempt to change from "485A" and "485B" mentioned in documentation as default port configuration. BMS model listed in documentation is "HBL-275-07S40A", and it gives no hits on google whatsoever. At this moment I have no idea what to do next.

Any hints on what electrical specs of this connector could be or how I can test it would be greatly appreciated.

Oh, and I forgot to mention that we did try to connect UART adapter (with 1k series resistors) to those wires and send battery status request packet per documentation, at various baud rates (it is not specified in documentation). There was no change on the other wire at all.

As requested, I've removed heatsink and took some photos of the PCB. The chips were conformal coated and slightly scratched, as expected. After playing with light angles I got couple shots with partly visible markings. I wasn't able to completely remove sticky crap from the other side of the PCB. As far as I can tell there are four distinct copper pours there, three under FETs (where stitching VIAs are) and one more under the rest of electronics. I believe the ground under electronics is connected at some point to the battery side of FETs. 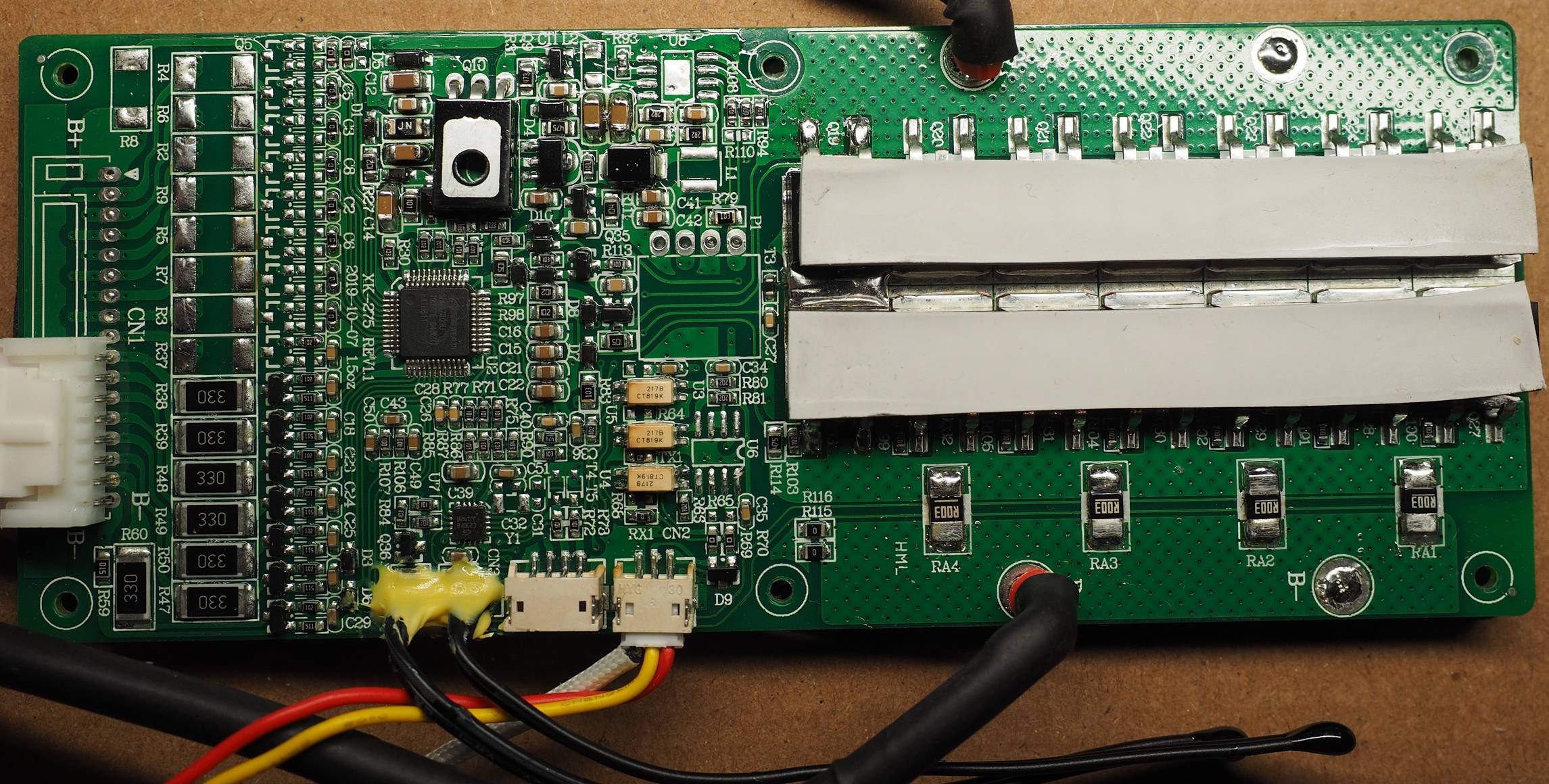 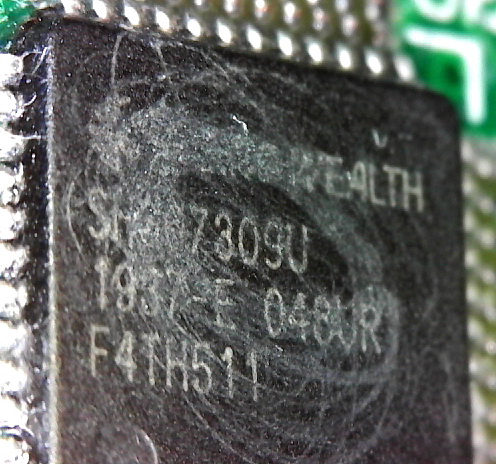 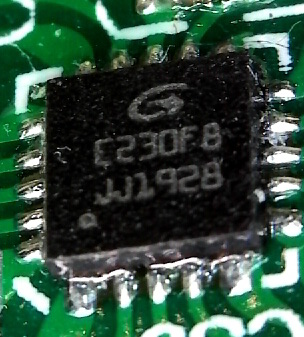 Two pins on the right of "communication connector" go to D9, which is probably ESD protection, then via 0 Ohm jumpers somewhere in the direction of those 3 white 217B chips, which look like optocouplers to me. The voltage on these pins is about 7 mV. Looks like RS485, but I do not see any transceiver chips nearby. Those pins also connected directly to pads of missing U6 chip. The pinout of that chip is exactly the same as most common pinout of RS485 transceivers (note 2 and 3 tied together, usually !RE & DE. also 2k pull-ups on these and DI pins that further go to optocouplers).

The four pins of the "programming connector" have 0, 3.29, 3.28 and 0V. Two on the right go through 100 Ohm resistors to 16-pin QFP chip. These could be GND, VCC, TX and RX pins of UART port, but UART generally does not need additional chip. Strange.

Also, I translated the BMS documentation. There are exactly 4 places with any mention of the protocol:

No mention of RS232, although salesperson said it is supported in the original agreement.

Here are a few things that I would do to start, based on previous reverse-engineering experience. These are just to give some initial information:

You asked about the connector - the visible white latching connector does not seem to be related to the UART connection, but instead is typical of the connections between the BMS and the individual cells in the battery - it looks like 7 cell connections.

It's possible that other people here would see useful details in the Chinese documentation from the manufacturer, if you can repost the part which you said mentions a UART default configuration.

Finally just one point (which I know you don't want me to labour, but I'm concerned about this): If the manufacturer isn't interested enough in helping you with full details of the UART interface when there is a pending order, how interested will they be in helping you, in the event of you asking future questions or having problems, once they already have your money? I hope you see why I'm worried.

1
UART Communication with PuTTY
0
Unreadable characters over UART
0
Upon setting up serial UART between two boards I can only monitor send or receive, not both, Why?
1
RS485 multidrop to UART
0
BMS for 12V Lead Acid Batteries (48V)
2
What is this port, 4 holes, 2x1.8v pairs
0
Can I use this USB-to-UART converter with a MCU?