What kind of inductor for DC-DC converter module's EMC filter?

I'm looking at the datasheets for a number of switching DC-DC converters. They suggest for EMC filtering to add an inductor and a capacitor or two on the input side of the converter.

The question: what kind of inductors are required? How critical are the values?

I'm not after product recommendation, I'm after clarification of the type of component.

The converter datasheets show a filter circuit as follows: 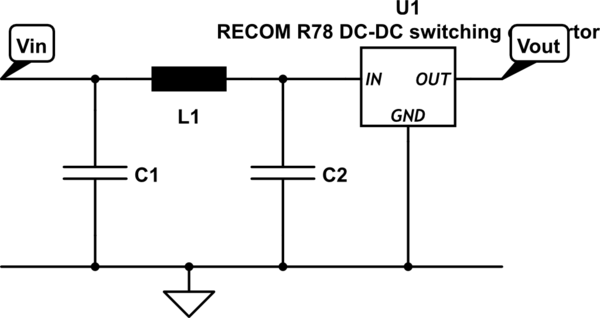 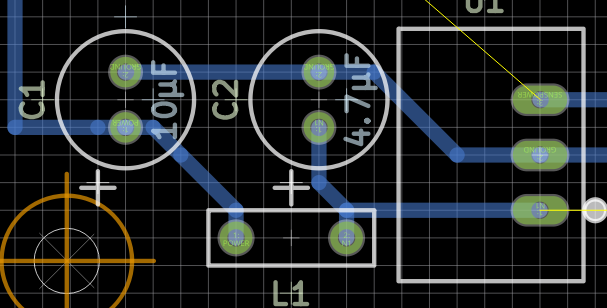 For reference, these are the values from the DC-DC converter datasheets: 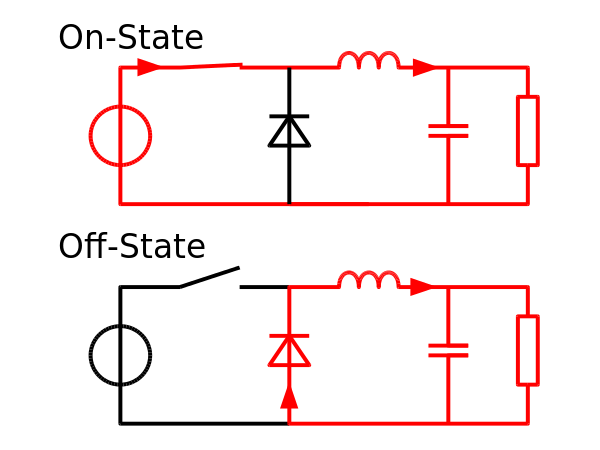 These are 0.5A and 1A DC-DC converters so max input current will be a bit above 1A peak square wave, say 1.5A accounting for inductor current ripple. Frequency around 500kHz. It will be somewhat smoothed by the internal ceramic caps, but short of actually measuring it, there is no way to know how choppy it will be.

Caps should withstand 1A ripple current at 500kHz.

Noise voltage on the input caps will depend on their ESR and ESL (Equivalent Series Resistance and Inductance). When input current jumps from 0A to 1A this will cause a voltage drop on the cap which is: \$ R di + L \frac{di}{dt} \$.

The small electrolytics you selected will have ESR above 10 ohms, and they can't take the ripple current, so they're out. Besides leaded caps of this size have ESL above 3 nH which is unnecessarily high.

The proper cap type is X7R SMD ceramic, as per datasheet. There is no need to buy 4.7µF and 10µF caps, it will probably be cheaper to just get 10x 1206 10µF X7R caps in whatever voltage you use at the input like 25V, that buying several different values. These will have ESR of a few milliohms and low ESL too.

Here SRF is about 35 MHz. Note above SRF, impedance decreases, but it still stays pretty high up to 100MHz, so the inductor will still be effective above the SRF. It doesn't abruptly stop working above the SRF.

So if you want to pick another inductor, make sure to select 5.6µH (or more), saturation current above about 2A, SRF above about 20 MHz, and series resistance depending on how much losses you deem acceptable. Also a shielded inductor is less headache. Sort by price, and pick a winner.

If this is for a one-off personal project it makes more sense to invest 50c in a LC filter rather than mulling it over 2 hours and testing it to see if you can save 50c in parts.

This filter is simply a current divider. You want to keep HF current out of the supply cable, so you add a high impedance in series with the cable (the inductor) and a low impedance to ground (the capacitor). This is why it is important to have low inductance capacitors.

If you don't know where to put the input cap, put it as close as possible to the DC-DC pins. It's OK to put it below the board very close to the pins if you solder this by hand.

Since there is only one layer used on your board screenshot, please use a ground plane on the other layer. Also, copper is free, so you can fatten power traces and use copper pours.

The question: what kind of inductors are required? How critical are the values?

Just take a careful look at the data sheet for the RECOM model: -

Notice the part numbers inside the red boxes? 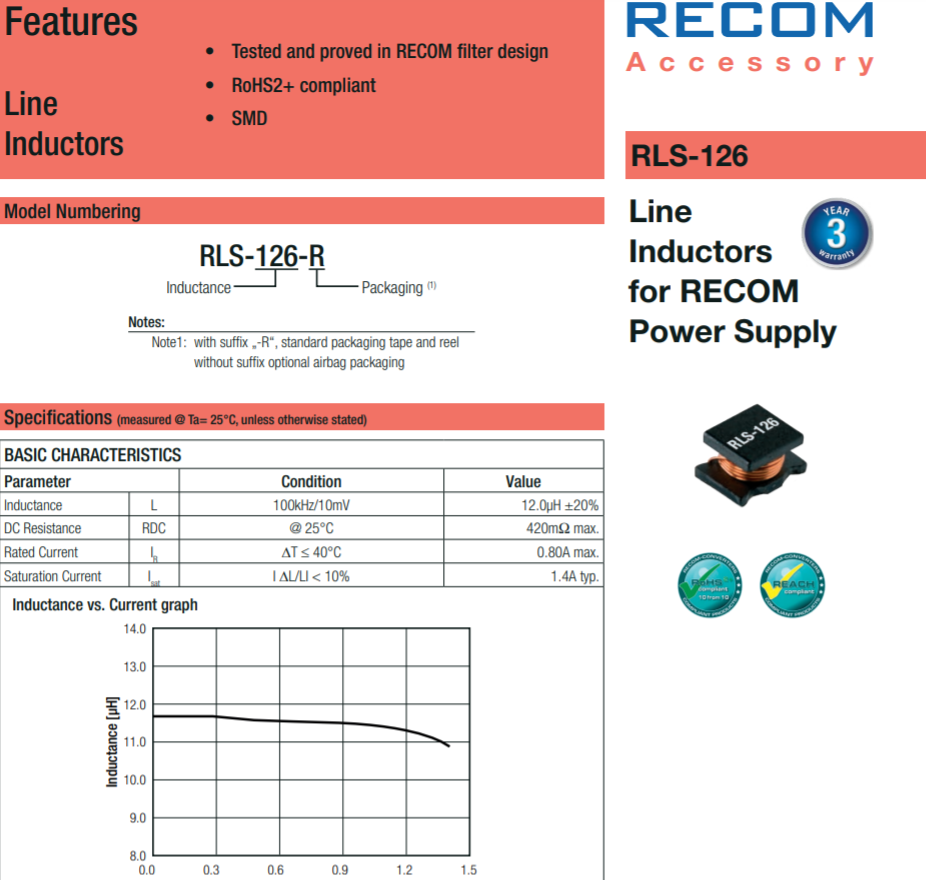 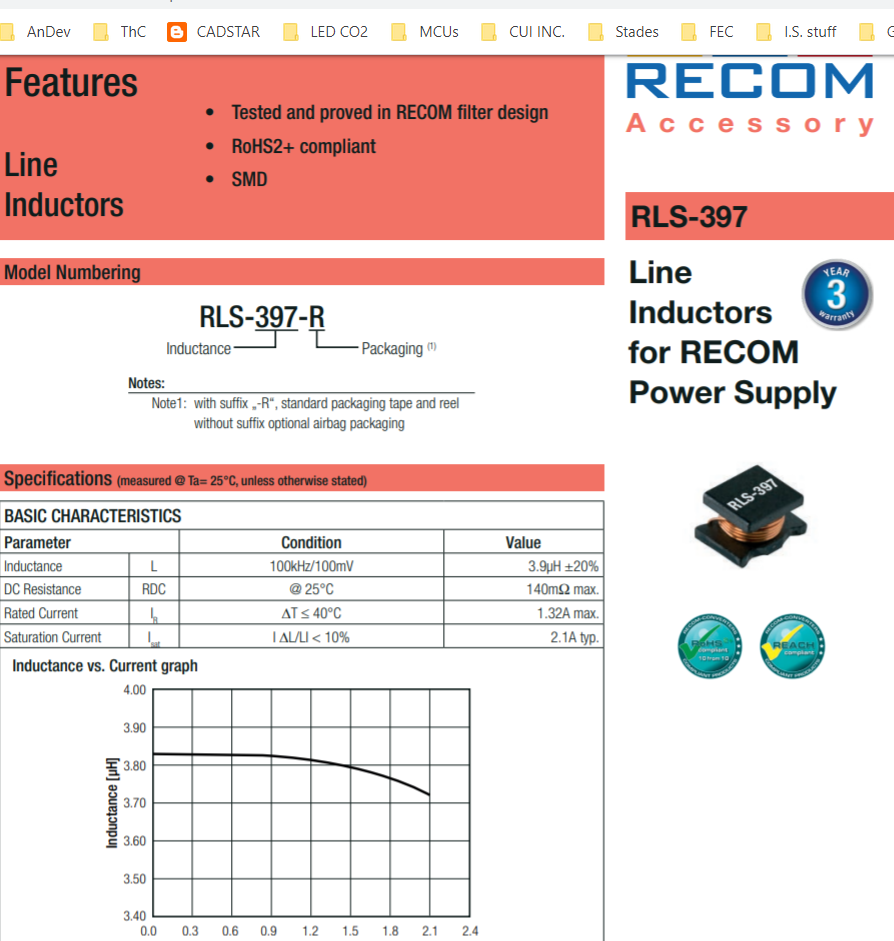 And, for the Traco supply, they recommend this part: - 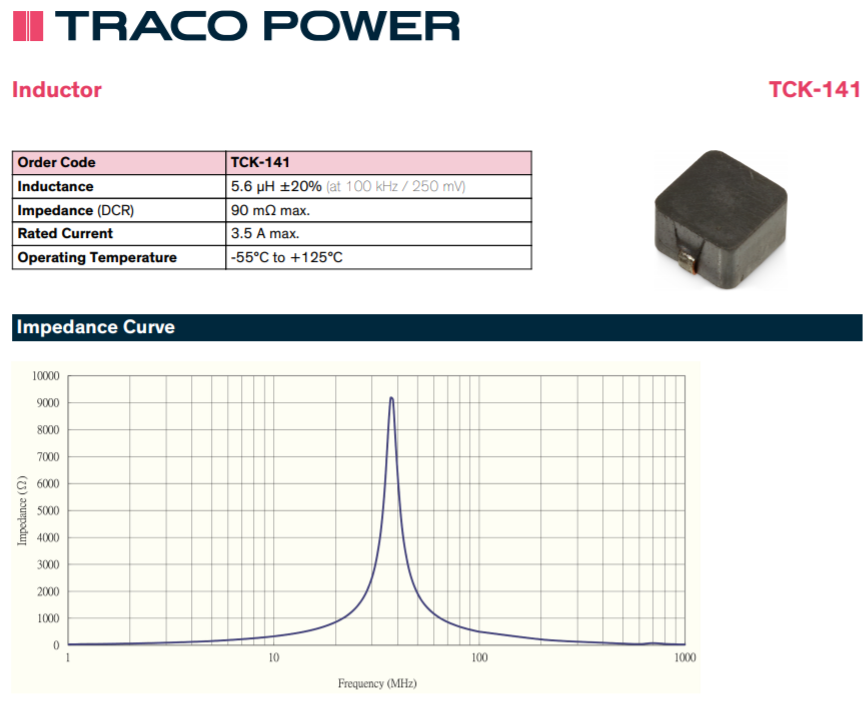 I'm not after \$\color{orange}{\text{product recommendation}}\$, I'm after clarification of the type of component.

It's fairly difficult to answer this question without giving a \$\color{orange}{\text{product recommendation}}\$ because the data sheets for the Traco and Recom actually give specific product recommendations. However, just because they do, it doesn't mean you can't locate similarly specified components at possibly a lower price. But this takes a little more care.

Are they "axial-leaded high-frequency inductors", in a resistor-like package? Open coils?

The pictures (above) taken from the data sheets tell you and, if you need any more help, just leave a comment.

If you think you have found an alternative to the TRACO TCH-141 (for example), you need to be very cautious about its self resonant frequency (SRF). At the SRF (about 35 MHz in the pictures above), it will act as a high blocking impedance and this may be high-up on the list of reasons for choosing it - that blocking impedance may very well coincide with some high spectral noise content from the converter and choosing say an inductor with a significantly different SRF may not work well at all. 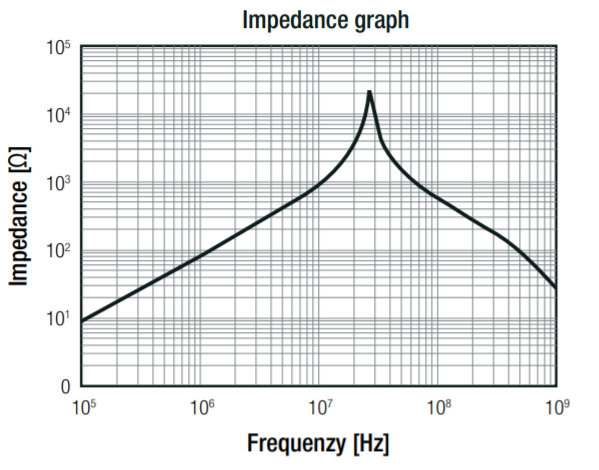 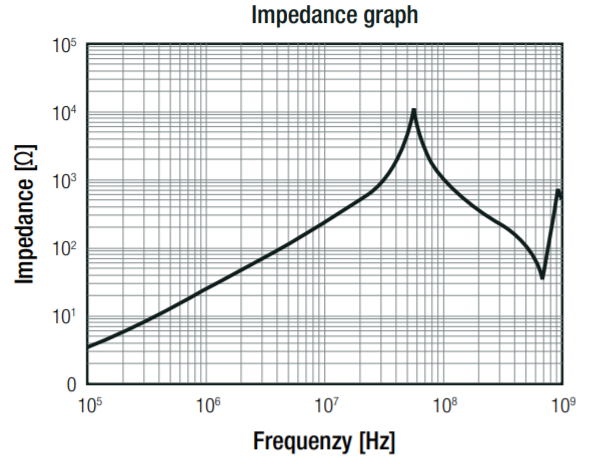 The main issue in selecting the inductor isn't going to be the values, but will instead be the current requirement vs. the inductor's saturation current, I(sat). This will reduce its effectiveness as a filter.

The EMI issues with DCDC arise from the the from the output, via the output filter cap, back to the DCDC low side. This has a very high-current spike when the coil input switches from Vin to GND. Minimize this loop area as much as possible, and use low ESR caps for the output filter.

The input on the other hand has a step sawtooth-like current waveform with lower currents than the output, and so isn't as critical for EMI. Use the recommended input bypassing with good low-impedance connections to Vin and ground. For a regulator this size I'd use about 10uF.

While the linked datasheets recommend some kind of an LC filter, a system-level solution to the problem can make use of a common-mode input filter to block switcher noise to the external supply. I've never had to employ one however, as bypassing the Vin plane proved adequate to meet conducted EMI using a DC input.

to give more details on physical placement, to minimize EMI:

That capacitor on input side should have its GROUND lead as close as possible to the Source pin of the switching FET or the GROUND lead of the schottky flyback diode.

The type of Inductor at that part of the circuit is called a "choke", already mentioned above, the input rail sees a sawtooth drain due to the switching frequency of the device, this input coil (inductor/choke) is somewhat tuned to this switching frequency and smooths the sawtooth effect to prevent possible interference to other parts of the circuit on the same power rail. i hope this helps you understand the dynamics. ;)

Not the answer you're looking for? Browse other questions tagged inductor emc component-selection or ask your own question.