How to Wire DC Motor to Solar Panel and Battery to Only turn on at Night?

I have tried looking this up on google but can only come across ones that have the motor running all the time from the solar panel and battery, where I need it to run only at night. So anyways, my dad is trying to build a small scale lighthouse (6 ft tall) and basically needs the motor to only run at night to turn the shaft that has a light on it to simulate a real lighthouse. My dad and I arn't too familar with electrical things when it comes to DC stuff as I know a little bit and my dad knows pretty much nothing other than + goes to + and - goes to -.

So far my dad thinks we should connect the motor to the battery and electrical panel to the battery, but I told him that I think that will run the motor all the time, which is not what we want. So we both know we do need a sensor to detect if it is night or day of some sort. Anyways, one video mentions using a DC to DC buck converter. This is because the voltage coming off of the solar panal is 20 volts as I measured it with my multimeter. The current plan looks like this: https://imgur.com/a/X7VsoDn However, there are a few issues with this current plan that I am hoping you guys can help us out with. The first thing is that there is no sensor and I am not for sure which one to get and how to wire that into the circuit. The second thing is that the solar panal actually came with a "charge controller." I think we may need this as the amps put out by soloar panel according to the specs on amazon is too much for the buck converter and the motor. In the design above, there is no charge controller in there as I don't know how to wire that in either. The reason why I think we need the charge controller is because it says the amps is reduce to 3 amps which is below the max amps that the buck converter says it can handle, which is good. Another thing I am worried about is we might need a second charge controller or something to reduce amp as the amps coming from a standard car battery is probably too much for the second buck converter. The reason why there is a second buck converter is because my dad wants the motor to spin slowly as this motor, while it has lower rpms, it is still way to fast. I know that if I reduce the voltage down from maybe 12v to 9v, that it will decrease how fast the motor spins. This number may have to be reduce further by playing around with the buck converter to get the right speed out of the motor. One good thing is I don't have to worry about direction of the motor and even if I do, I can just change the polarity of the motor by switching the 2 wires around. I am also thinking there is probably something else I am not thinking about that can be a concern that you guys might know about. So anyways, here are the current parts we have from amazon and the specs are listed there too:

I would use a relay such that when the panel is producing power it holds the relay open and the motor is not powered.

Once the panel fails to produce sufficient energy the relay contacts close switching on the motor.

Of course, fuses etc should be fitted as necessary. I find it helpful to think of the "charging" side, the "load" side and the relay which is the link between the two sides. So the two wires from the panel to the charge controller also need to connect to the coil on the relay. 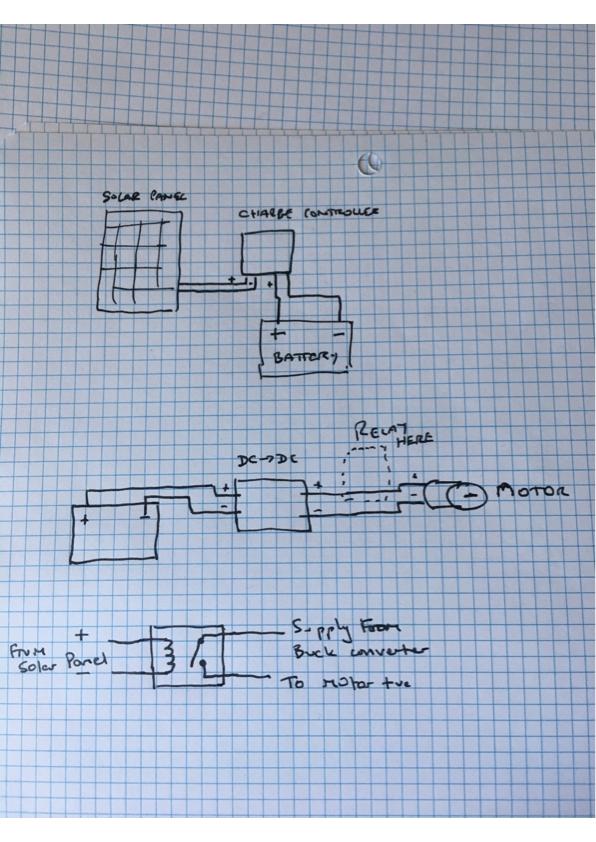 As for what is available in your local hardware store - I have no clue. But a car headlamp relay for example may well be suitable.

Not the answer you're looking for? Browse other questions tagged batteries dc-motor solar-energy buck-boost solar-charge-controller or ask your own question.