RC servo suitable for robot arm or not

As you see many product and open source using RC servo to build small robot arm. This question might simple but I think it important to someone that want to build robot arm and decide which type of actuator to use.

As engineer student I learn to control DC motor and learn how it interact with dynamics system like robot arm (manipulator) It take many knowledge about this system and parameter that we try to control to cancel non linear term or at least make it stable. But how RC servo work to control its position? I've try to build robot arm myself (parallelizer type ,15 CM Arm, 3 x MG995) it look stable (not osculate and still actuated) How that possible to design position control that work in wide range parameter?

2. From that type of control, Is that suitable for robot arm or should I use another one?

As you see in many project. it seem to work with manual control. some project make its remember command and repeat it (show some repeatability). after playing around I see that RC servo cannot compensate steady state error (may be it don't have I term) and it can't read its position it quit dangerous when it start and do rapid move. In my application I want to control robot by calculate inverse kinematic. after working on it for many days, it seem pretty hard to to tune or calibrate it.

A servo motor means it has feedback, you have the motor which does the actuation, and you have the feedback system that reads back where the servo is positioned and trims the position of the motor to make them align,

Most use either a potentiometer, an encoder wheel and 2 or more sensors, or a hall effect rotation sensor, the goal is that is is able to read back in where the rotor is positioned so that it can make sure it matches what is set, 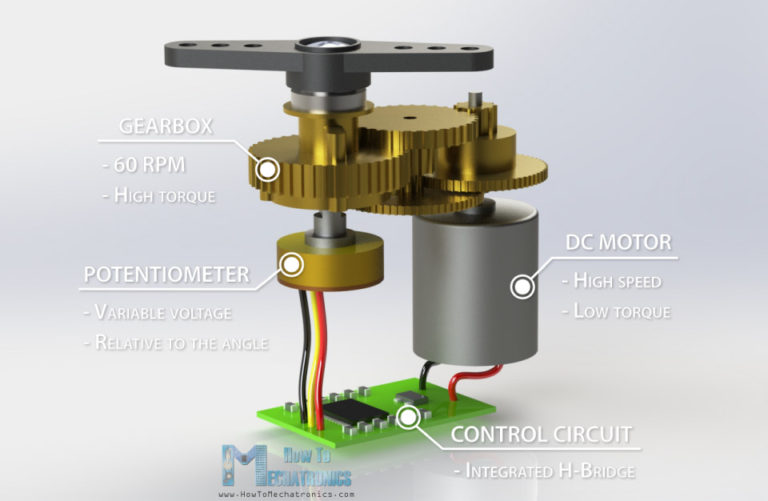 This should mean that if you nudge the servo horn it should come back to the same position each and every time, and to be very hard to turn if you try and force it, this would be it correcting for steady state errors.

The internal servo controllers are usually "tuned" to be stable over there speed and weight limits, meaning they should not oscillate. what this usually means is if you find the slowest and least reactive P and I settings for those ranges, while it makes the response slower, it means that there is no point during operation where it is at risk of oscillation,

Other tricks to make things as stable as possible will be to slice your motion path up into many small steps, the larger a step you ask the servo to follow, the less control you have over how it gets to that step, and means you have to start correcting for the motors internal control system, instead try and make your own kinematic control system closer to a least disturbance control system, where it deliberately runs a little slower than the control loops it feeds to make sure your never pushing things to a point where they can oscillate.

2
How can I understand a servo well enough to build one?
0
Connecting multiple servos for a robotic arm
1
Step/Dir input Servo Drive: how does it work internally compared to a serial input drive
0
Reduce 8.4 volts to 6 volts
2
Is Axial Gap (pancake) motor better for servo drive applications?
1
Controlling MG946R servo with 3.3v PWM signal
1
MG996R that can rotate all the way around, but behaves like a normal servo