I have an ADC with 1 kS/s and would like to append a digital anti-aliasing filter to it as I have to downsample the data to 10 Hz.

As it's on an FPGA and I don't have any multipliers, I thought the easiest way would be a recursive averaging IIR filter:

But how can I calculate the cutoff frequency of such a filter depending on \$\alpha\$ and \$f_s\$?

With you needing an anti-alias filter for 1/100 of the bandwidth, I'd say that both your single-pole IIR (exponentially weighted moving average) and actual moving averages are out of the question; you'd need suppression in 99% of your band sufficiently high enough to mitigate aliases.

Simultaneously, you need a filter with a steep transition between pass- and stopband, relative to the original Nyquist rate.

Neither filter approaches will achieve such a steepness.

Higher-order CICs can achieve sufficient suppression through offering a very steep (potentiated sinc) impulse response, and their use in decimators (like your 100-fold decimation) is very popular due to the elegant nature of the math: you can drag the decimation stage between the integrators and the differentiators, like

As you can see: extremely low component effort!

In all honesty, though: You're building a massively decimating filter, at a sample rate that is ridiculously low for FPGAs, aiming for a sampling rate that's even lower.

Do yourself a favor. Calculate a proper 1/100-band FIR filter. At these rates, you really need but a single multiplier that you use for all coefficients. And even then it doesn't need to be a fast one. That way, you gain significantly more freedom in designing your filter response.

Found it: You should really read this article of Richard Lyons, whom you can also work with over on our Signal Processing StackExchange sister site.

What you propose is often called an "exponentially weighted moving average", and armed with that term, you can probably find a formula (wikipedia discusses this in some way).

Generally, what you propose doesn't even work without a multiplier (how do you multiply with \$\alpha\$ and \$1-\alpha\$ without a multiplier– they can't both be a power of two at the same time?), so I doubt it's actually a solution to your problem.

(An actual moving average would work – just add up a window of \$N\$ input items, tada, convolution with a rectangle corresponds to a sinc in spectrum of \$\frac1N\$ width. But that's not a great filter, honestly, because of the sidelobes.)

What you will be interested in is Cascaded Integrator-Comb filters (CICs), which

Where CR is the equivalent CR time for a resistor-capacitor low-pass filter. So, with 1 kHz sampling and a required frequency cut-off (\$F_C\$) of (say) 10 Hz you'd calculate CR as follows: -

Linear Simulation with VIN at 1 volt peak and 10 Hz

Discretely sampled at 1 kHz (prior to feeding into 1st summing block): 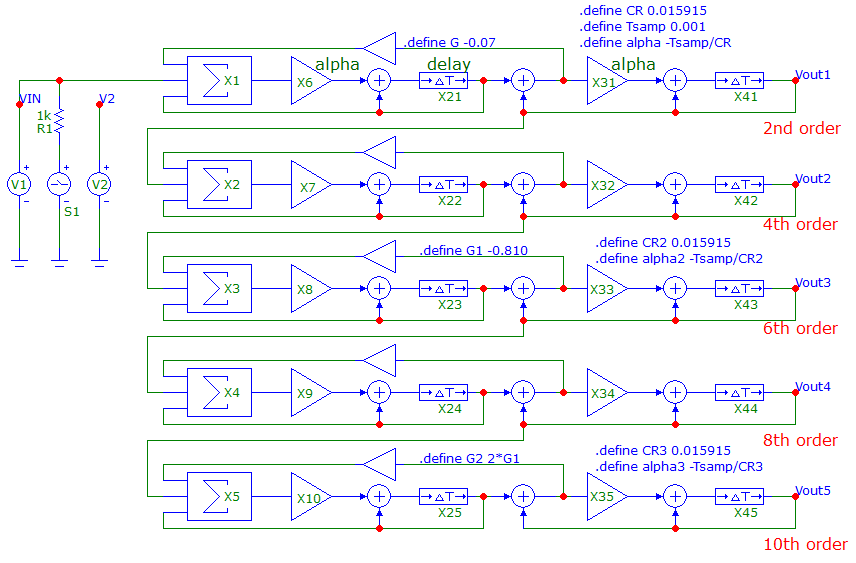 Besides what the others have said, your difference equation leads to this transfer function:

If you consider the corner frequency to be the -3dB point, then this results back in this difference equation, followed by solving for the exact (sampled) frequency, \$\Omega_p=\pi\frac{f_p}{f_0}\$:

A picture might be worth a thousand words, so here's a quick check with LTspice, two versions of it:

Here's a 1st order IIR Lowpass (also known as an exponential average) in C, using only shifts and no multiply:

It's become a standard block of code that I've used in a bunch of different projects now. You can do the math to see that this sequential operation has the exact same effect as the canonical version.
It must be atomic though - no task switching in the middle of it!

I'll leave it to the reader, both to optimize it as needed, and to translate it from a microcontroller to an FPGA. My point is simply that it can be done without a multiply.

For higher orders, you can cascade a bunch of 1st orders:

out and mid_ must each have their own dedicated storage.

Not the answer you're looking for? Browse other questions tagged digital-filter or ask your own question.

4
Dedicated digital filter
3
Do digital Anti Aliasing filters exist for traditional ADCs?
2
SNR improvement from placing analog filter ahead of digital filter
1
Time delay: digital low pass filter VS analog low pass filter
17
Why should I use digital filters rather than simply manipulate signals in the frequency domain and then recover them into the time domain?
0
FIR filter output result Interpretation While input is taken from ADC161S626: 16 bit
4
digital bandpass filter with parallel inputs
0
ADC sampling frequency - Noise filtering
0
How to DSP filter a signal that has a variable time base?