I want to builf a small electrical panel to control the navigation lights on my sailboat. Depending on if you are at anchor, sailing or motoring, different light configurations have to be used.

A sailboat is normally equipped with the following navigation lights:

I need to be able to switch between 3 different lights configurations:

I will have a dedicated switch on the electrical panel for each lighting configuration. In order to avoid current conflicts between the various lights and switches, I was told I can use diodes to prevent flowbacks. So, here is the circuit I have in mind. I am handy and have worked quite a bit on boats and general electric stuff but I have very limited knowledge of electronics circuits.

Typically on sailboats, we tried to waste the least power possible so, I hope diodes are not using much power or generate too much heat. I would appreciate any guidance and advice on whereas this makes sense and what type/model of diode I should use for this. 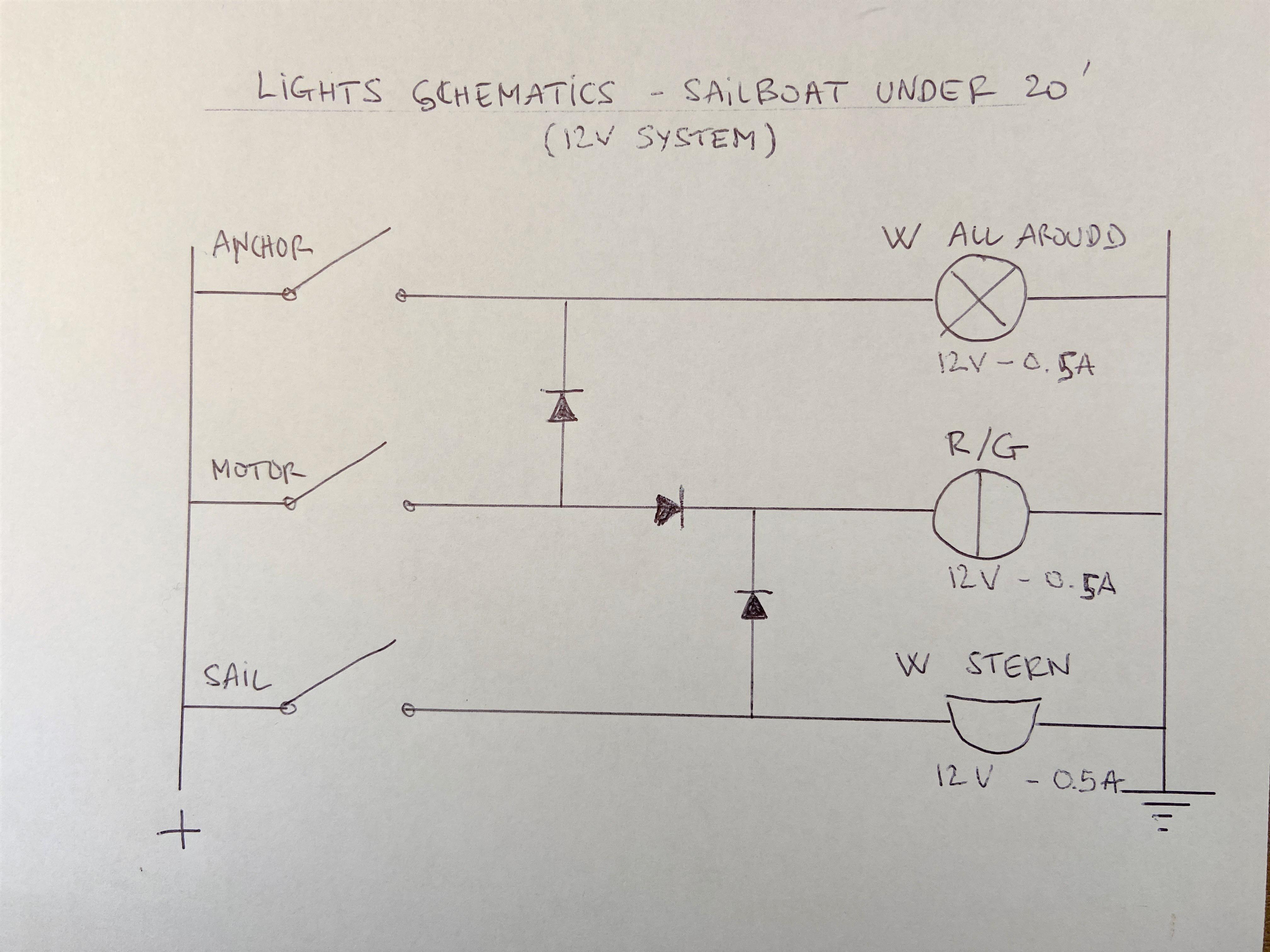 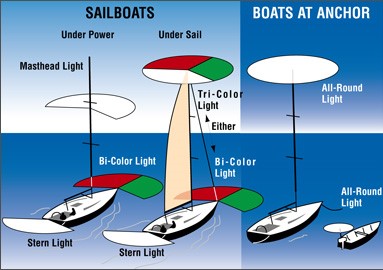 The arrangement you have drawn will work, subject to you choosing appropriate diodes. But there is probably a better way:

You can use switches which switch more than one light at once. Specifically Double Pole Single Throw (DPST) switches. One each for Motor and Sail, and a normal SPST switch for anchor. Of if you want three identical switches, use three DPST ones and leave the other two terminals on the anchor switch unused. 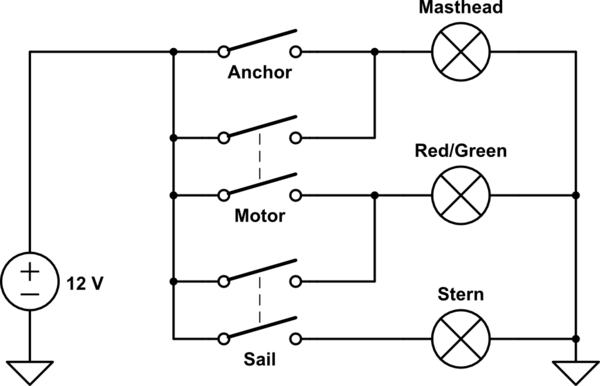 I'm not entirely sure what you mean by preventing "Flowbacks". If you were to try to set up a similar circuit using just SPST switches it wouldn't work, because closing the anchor switch would allow current to flow down and back to the motor switch, then on to the red/green lamp. If that is what you meant, then using the DPST switches prevents that.

Note that neither your design or mine prevent you from putting all of the lights on at once by closing more than one switch. If that is something you want, you could use one 4-position switch. Either DP4T (which might be harder to find suitably waterproof) or a SP4T with diodes.

One of my pet peeves is people getting navigation lights wrong. It's right up there with people using strobes at anchor (we don't have curtains). I do lots of sailing, months each year and regularly see people showing lower nav lights and anchor, tricolour and lower nav lights, or sometimes everything (or nothing). It shows they shouldn't be on the water at the very least. It's amazing how many people thing lower nav lights and tricolour should be shown at the same time!

The biggest problem with diodes as a solution is the voltage drop. There is typically half a volt drop over a diode and you are already dealing with some of the longest cable runs on the boat.

I use a 4 position multi pole rotary switch usually used for reversing motors. It has plenty of rating so it can handle a lot of load, has a chunky satisfying feel in use and once wired the most stupid person in the world can use it. They are mass produced and therefore cheap. They also have a pretty standardised form between manufacturers. I have never had to replace one because they are very heavy duty for switching these loads. It has four positions. Off, motor, sail, anchor and the positions are indicated with labels and pictures. Firstly it means you can't get the anchor light on in conjunction with anything else, or show the steaming light with anything other than the lower navigation lights. You can't put the lower navigation lights on with the tricolour either...result.One thing I do add though is an additional hidden switch or easy to access connector with the steaming light for emergency use. This is a failsafe if your tricolour fails so you can use lower navigation lights for sailing. I prefer sailing with a tricolour because it illuminates the top of my sail and my winder.

It also looks nice on a switch panel. For professional results you can get adhesive plastic sheet you can Print onto using a later printer to make waterproof stickers or use letraset. I make stuff in carbon fibre and white lettering can be varnished over to make really swanky instrument panels. I think single switches might appear simple but in practice too many people get the light combinations wrong. The system I am proposing should be standard issue on boats being chartered to give the rest of us a chance to navigate others safely at night!

In answer to the comment below (and because I am being told off for writing two answers to this question! ) my yacht is a sailing yacht. Previously I have done the same thing with all but one of my yachts. I have an all round white led masthead, an led tricolour, led steaming lights and led combined lower nav lights at the front and a white led stern light. I use a 4 position 10a 3pole rotary switch. They are currently listed for £8.99 on ebay as 'LW26 4-position 3-pole rotary selector universal rotary cam changeover switch".you just use a test probe to work out which terminals go on and off as you turn it. You should end up with one positive wire going to it (fused) and wires for the relevant lights coming off it. Simples. I often sail across oceans and spend months at a time sailing about. These switches are really rugged and don't go wrong.