Designing a Arduino based circuit to power standard and RGB LEDs

I am very new to the world of circuit design and would greatly appreciate some feedback on this circuit I made. It is based on an Arduino Pro Mini and its purpose is to illuminate nine 2V, 20mA LEDs as well as twelve SK6812 RGB LEDs. At full brightness, they require 60mA. Since the circuit will be inserted inside a 3D printed scale model, I would like to make sure the components are well protected so they can last a long time.

Here is the schematic of the main circuit. The resistors values of 50Ω and 150Ω are there to limit the current inside the LEDs to 20mA which is the recommended limit per pin on the Arduino (see link above). Also, the 9 LEDs need a total of 180mA, just below the 200mA limit. 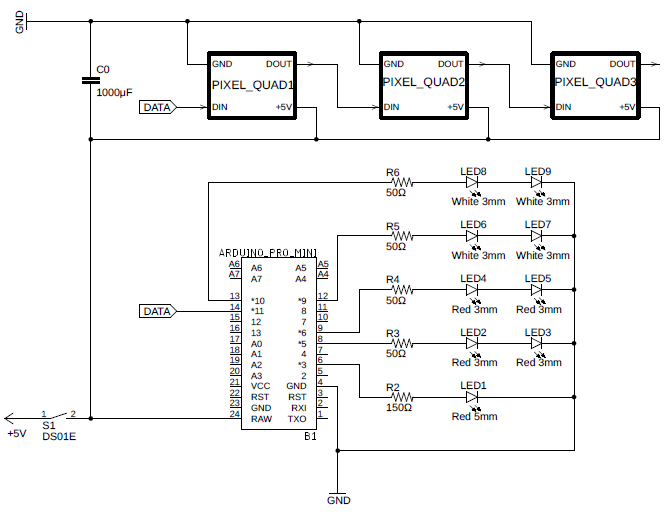 Each group named PIXEL_QUADx corresponds to a circuit that is very similar to the one at the end of the SK6812 datasheet. Their schematic is shown below. The 0.1µF capatitors, 470Ω resistor, and 1000µF capacitor (on the schematic above) are added because of the recommendations found on Adafruit's website.

My first question is: is this circuit correct? Other points I am not sure about are:

First of all you should learn more about electronics and prototype it on breadboard. Question 1, according to your link, it's say

Adding a ~470 ohm resistor between your microcontroller's data pin and the data input on the NeoPixels can help prevent spikes on the data line that can damage your first pixel. Please add one between your micro and NeoPixels! Our NeoPixel rings already have this resistor on there

Question 2 If current consume below 500 mA you can use USB. For battery, use the voltage above 7V and suitable current will fine.

Question 3 See arduino schematic in official web for reference. it simply use linear voltage regulator then convert voltage to 5V. please read more about power consumption of linear regulator. for short you should use 7 at least because regulator have drop out voltage. if you use too high voltage on raw regulator might get hot and burn due to power loss.

Question 4 Sure it's safer, If you want to control dimming you should use transistor to drive more current.

White LEDs typically require about 3 volts, so you can't run two in series from an Arduino output.

Best practice is to not push the Absolute Maximum ratings of parts, so you should have the Arduino outputs drive transistors which in turn drive the LEDs - then you can drive the white LEDs with higher currents if required. Each transistor could drive two LEDs in parallel, each with its own series resistor.

Not the answer you're looking for? Browse other questions tagged arduino led rgb or ask your own question.